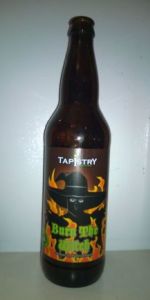 Pours a fairly clear dark cola color, with a two and a half finger head on an aggressive pour. Some foamy lacing. Smell brings malt, yeast, caramel, light chocolate, some black pepper in the head. Smoky, wheaty, a spicy aroma. Taste is somewhat malt forward, yeast, caramel, chocolate, some figs and raisins. A little bready, and some spiciness in the flavor, as well. Smooth, somewhat creamy, good body- maybe a touch lighter for the style, appropriate level of carbonation.

Solid representation of the style, really good flavor and aroma. Good price point, too. Well worth a purchase, if you can grab it the next time around.

I picked up a bottle of Tapistry's Burn The Witch a couple weeks ago for $9.49 at The Lager Mill. I'm a big fan of Weizenbocks and since I don't see they often I made sure to give this one a try, so lets see how it goes. Bottled 7/31/15. Poured from a brown 22oz bottle into a snifter.

A- The label looks really nice, it;s got a good design to it and it's eye catching. It poured a darker crimson color that took on more of a ruby color when held to the light with a fingers worth of bubbly light tan head that died down to a thin ring that eventually faded and it didn't really leave and lacing behind. This is a nice looking beer, but the wish the head, retention and lacing were better.

S- The aroma starts off with a higher amount of medium sweetness with some dark fruits being the first to show up and it imparts a nice fruity mixture with some dark cherries showing up just a little more than the other fruits and it goes into a little bit of a banana aroma from the yeast along with a good amount of spices also coming through. Up next comes some candied sweetness followed by the malts which impart a light dark wheat and toasted malt aroma with a little bit of caramel coming through. This beer has a pretty nice aroma, but I wish it had more roast with a little more banana.

T- The taste seems to be similar to the aroma and it starts off with a higher amount of medium sweetness with the dark fruits still being the first to show up, but they aren't as strong as they were in the aroma and no single fruit seems to stick out the most. Up next comes the banana which is even lighter than it was in the aroma and its followed by the spices which are also lighter. Towards the end comes the malts and dark wheat which impart the same aspects. but they are lighter and on the finish there's a lighter amount of medium bitterness with a slight alcohol flavor and it had more dark fruit flavors showing up in the aftertaste. This is a nice tasting beer, but It was a little light on flavors for the style.

M- Fairly smooth, a little crisp, medium bodied with a medium amount of carbonation. The mouthfeel is nice and it works well with it.

Overall I thought this was nice beer and a slightly above average example of the style, it seemed to being going in the right direction, but when I got to the taste it just got to be a little lighter than I would want for the style and those key flavors that I expect to pop did not. This beer had ok drinkability, I think one glass is enough, but I think I can take out the full bottle. What I like the most about this beer is the aroma, it was pretty nice and the highlight of this beer. What I like the least about this beer is the taste, it wasn't bad, it just need to be a little bigger and bolder to match the style. I don't think I would get this beer again, but I wouldn't turn it down. I can't it's a must try, but it is a unique example of the style so it might be worth a shot. All in all I liked this beer, bu t I didn't love it, it just turned out to be a little rough around the edges, It's not a favorite from this brewery and it's just a little above average for the style. Nice job guys, but a little more work on this beer and it could be pretty good.