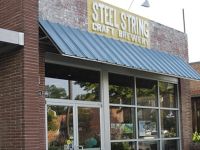 In my very humble opinion, I think this brewery has some of the best beer in The Triangle area.
Good vibe. Cool art.
Friendly crowd.
Well worth checking out.
Lots of restaurants nearby.

This brewery is conveniently located in the center of Carrboro and an easy walk from Franklin Street in Chapel Hill. As you'd expect from a brewery in a college town, it has a lively vibe with students and Carrboro hipsters. The staff is friendly and if you're fortunate to be there when it's not crowded the staff is happy to talk beer with you. The beer itself is quite good. There are really good restaurants within easy walking distance.

Yeah, I think this place is great. My 4 vote for selection is just in line with the fact that it is basically a nano-brewery so 4-5 of their selections on tap is understandably not extensive (they usually have one or two more selections of cider and ale from another choice regional brewery). Of all the beers I have had at this brewery, I can say that I have either loved them, or at least had high respect for their efforts. Iffin' you happen by, then I must say that their Berlinerweiss is THE BEST (even amongst several Berlin based versions) I have had. Overall cozy, casual, very friendly and knowledgable service. Perfectly Carrboro. Beautifully North Carolina.

Small but love the rustic interior.

Stopped in here on the way to RDU. It was a weeknight, and it was pretty quiet, which was perfect. This is a great spot in downtown, with a great feel as soon as you walk in. Patio seating streetside, and the bar is a reverse J-shape on the right side when you walk in. Past the bar, you can see the brewing equipment through some windows. To the left of the entrance there is table seating. Decent sized place. They have 6-8 of their beers on-tap at any given time, and they have guests taps going often, as well. Growlers and bombers available to take home, and plenty of swag for sale. The beers were very solid. I got to talk to the owner while I was there, and it sounds like expansion is on the horizon, which is a great thing. It's good to have more breweries pushing the boundaries of the beer styles. Can't wait to get back.

I have been on a few occasions and the selection is great but it is usually slow and quiet. I have gone when it is a bit more busy but it seems there needs to be a special occasion. It's not just a place you go and expect there to be a busy bar. Want a good atmosphere, chill place to sit and try some new beers? This is that place to go. Demographic is middle age.

I really wanted to like Steel String, but I just can't bring myself to say that I did. It’s very close to my new bride’s parent’s home, which would make it ideal to visit on a regular basis. But their beer recipes just don’t hit home with my palette.

They’ve got the location down, at least. The building is in downtown Carrboro, which is a very nice, quaint downtown surrounded by a ton of people living in every direction. It’s not Durham or Chapel Hill, and definitely not Raleigh, which is appealing. The bar, tables, and light fixtures all seem antiques and are beautiful, comfortable, and appropriate for the spot. And the outdoor patio housed some awesome elderly bluegrass musicians, which is one hell of a touch.

The only problem is that I very nearly hated their beer.

Every single sample I choked down seemed to miss extremely wide of the mark for the style they’re aiming at. Both of the IPAs were extremely overhopped, leading to not much more than bitterness all the way through the drink, extending for several minutes in the finish even. Not pleasant. Their farmhouse ale didn’t have either of the fruity or sour notes expected when I hear the word farmhouse. I don’t know how the Saison yeast failed so miserably in its efforts. Or maybe it was just overpowered by the hops?

The only beer I’d bother drinking again was the Rubber Room Session Ale. Unlike all five of the others, this brew wasn’t overhopped, which made it drinkable. This is surprising as its ABV is just 4.7 percent and it would be extremely easy to overhop.

Perhaps the problem is that the owners and brewmaster are really into the West Coast style of beers, which just doesn't hit my preferences. I don't even really like Green Flash, for example. Or perhaps they're young and still working on the recipes. Maybe they just had the worst examples of their craft on tap when I visited.

I've since moved to Chapel Hill following my original review and had the opportunity to revisit Steel String on more than one occasion. And I must say, they've sold me as a fan.

In my subsequent visits it seems like there is a wider range of house brews available, many of which do not focus on hops. I've had an excellent double chocolate stout, an exquisitely spicy Christmas ale, and a pretty well-executed double IPA. And they seem to have perfected their flagship IPA Big Mon, because it isn't nearly as harsh as I recall and is actually quite palatable.

That being said, they still miss the mark here and there. I had a pint of alt recently and found it pretty terrible, especially given the style. Alts shouldn't be that hoppy, and it tasted kind of funky. That one needs some work, but on the whole, I'm more than happy to patron Steel String on a frequent basis.

dirtylou from District of Columbia

Pretty sure this was my first time in Carrboro that didn't showcase a stop at Cat's Cradle...

Funky little room - lots of light, directly across from Tyler's and not much of a walk up to Cats Cradle and Beer Study.

Nice selection of taps - I'd had the DIPA before (pretty good) so I opted for the Big Mon IPA which was solid. The winter warmer was really good too.

A worthy stop on your Carrboro tour.