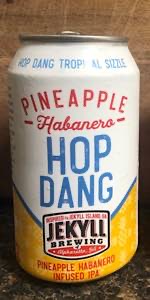 Notes: IPA’s are known for their hops, so we thought we’d give it something new. We tapped refreshing pineapple and habanero for the bill. Hops and pineapple mesh together like a fine linen- then just a touch of heat from the habanero for something truly special.
View: Beers
Reviews: 16 | Ratings: 53 | Log in to view all ratings and sort
Reviews by jnjander:

Over-sized, off-white, foamy head over a slightly hazy amber body. The head is durable and leaves a good bit of lacing on the glass.

Flavor: Piney hops are not my favorites but the hop load works well in the regular version and even better with the pineapple in this edition. As for the habanero effect, it initially comes across as light pepper and an (otherwise) unexpected light harshness, but the heat builds over time and sips to a reasonable level that doesn't burn but is obvious. Moderate bitterness for style.

Between a chill haze and perhaps some cloudiness the pour is a hazy golden orange with almost two fingers of white head. Retention amounts to a thin veneer and fluffy crown that imparts some large swaths of lace.

Slick, medium body with moderate carbonation. Citrus, pineapple and a dull, subtle nip of habenero play on the palate in the finish.

Pineapple and habenero add soft complements to Hop Dang Diggity rather than dominant flavors. I wouldn't mind if they were dialed up a bit but this is a tasty and highly drinkable variation of Jekyll's year round IPA.

Had on tap at Twisted Taco. Not what I was expecting at all. Almost no flavor almost as if it were watered down and absolutely no heat (nothing like habanero sculpin). Very disappointed.

Nice balance. Had bottle at home.