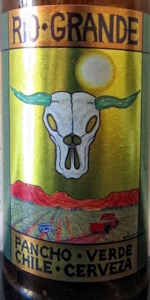 Notes: This beer has an unmistakable roasted chile aroma and flavor without being too hot. The whole chile is used to infuse the beer with a mild green chile flavor and leaves you with just a hint of heat on the back end.

People in New Mexico have a little thing with their chiles. Well actually it is a big thing. Eat anywhere that serves regional cuisine and you will be asked "red, green, or both?" Chile is served on everything, so I guess it is only natural that someone makes a beer with it. While it may sound like a great idea, it ended up being a disaster in my mouth - and glass. No head whatsoever. The first sip actually burnt the back of my mouth a bit from the chile and after that the chile was so strong, I could barely keep it in my mouth. Now the question is what I am going to do with the other 5 bottles in my fridge. Not to mention the half full glass next to me that I won't be able to finish.

P.S. If a green chile could take a piss, this is what would be in the toilet.

It seems Sierra Blanca Brewing took over the old Rio Grande brewey and decided to carry on a few of their beers, this is one of them. 12 oz bottle pours a light yellow color with a thin and rapidly diminishing white foam. Readily apparent this is a lager based chile beer.

The nose is pretty nice as the green chiles smell very much like being fire roasted. As with most beers in this category, the chiles dominate every other aroma in the beer. That's fine with me as I dont know if I could ever get sick of eating, drinking or smelling them!

Tastes like the base of this beer is a pretty bland lager, there is a light graininess from the malt and that is balanced by a faint hop bitterness. The chiles are great, not overly powerful or hot, but the roasted flavor has the faintest reminder of cardboard. This is far from the abomination that is Cave Creek, it's a pretty drinkable beer. There is a very slight heat in the back of the throat, but nothing dramatic. I probably will like this beer more than most, as I absolutely love green chiles in beer. This one is a pretty decent attempt, I like it.

bugbear from District of Columbia

A - Pours a golden pale color with a thin white head that vanishes quickly.

T - Follows the nose but more of a sweeter red chile, bits of muted vinegar, no heat, mild hops in the background.

Very interesting flavors. This would go great with chips and salsa.

Poured into a small shaker pint glass. Pours a light golden amber with a fizzy half finger head that dissipates in seconds to patches. Aroma of mild sweet bready, lightly grainy malt, green pepper with a light chili hotness. Flavor is very light bready malt with a adjunct profile, with a decent chili pepper burn developing with light green pepper flavor for character. Light bodied with active carbonation. A very light beer, with the friendly, mild malt reminiscent of adjunct lagers and not much character. The chili is mild to moderate and tastes authentic in the burn and green pepper flavors. Pepper is deftly handled, but needs a more robust malt base to present it. Probably a nice light, somewhat hot beer that would taste great with a Mexican meal, but underwhelming as a stand alone ale.

A normal-looking lager in the glass, lemony yellow color with a decent foam. Not overly carbonated on the tongue. Light body, and light everything else. Some acidic sensation.

A hint of malty sweetness is followed by a nice flavor of green chiles. It's not a particularly roasted or other exotic flavor, just that vegetable chile taste with a zing of heat. And not a lot of heat, either. This would be perfectly drinkable by the schooner, and maybe really cold on a sunny day it would hit the spot. This is maybe the least hot chile beer I've had, which is OK with me, but it could use a little more flavor.

From the 12 oz bottle bought at Jubilation Fine Wines in Albuquerque.

Thanks to jefferz5000 for this bottle!

The ninth entry in SwillFest 2011. It pours a clear sallow topped by a half-finger of white foam. The nose comprises nothing more than jalapeno skin and seeds. The taste brings in more of the same, along with some greens, and the lightest possible touch of peppery heat. The body is pretty light, with a light moderate carbonation and a watery feel. Overall, a kinda sad chile beer, but, to its credit, it doesn't try to overpower with crappy pepper heat, which definitely makes this easier to drink than most chile beers.

Poured from the bottle into a tulip.

In the nose: a bit of sour grain and maybe some apple and cracker, but behind it all is the subtle fire of pepper, like the juice of a fresh jalapeno. It's actually not terrible -- the piquancy adds some interest to a pretty bland aroma.

Take note, Cave Creek: this is how a chili lager is made. The flavor exhibits the natural character of a bland American lager -- a bit of breadiness, the slightest hint of sweet apple. The star of the flavor is the pepper, but it's applied with such a light touch. I get none of the abrasive, jarring heat that turns me off in other beers like this one -- just the crisp, snappily herbal qualities of pepper.

Medium-light body with moderate carbonation and a subtle fizziness. The beer finishes with a refreshing snap, each sip clearing the palate and preparing for the next sip.

Having experienced so many disgusting attempts at chili beer, this one was a pleasant surprise. It's definitely not my favorite style, but I wouldn't turn away another bottle of Rio Grande -- which is saying a lot.

Poured from a clear 12 oz. bottle. Has a very pale yellow color with a 1/2 inch head. Smell is mild, some light chile peppers. Taste is surprisingly smooth. Mild chilies, malts, some grains, very easy drinking and without much heat. Feels medium/light bodied in the mouth and overall nothing special, but a decent beer.

Poured from a bottle in Flagstaff AZ (after purchasing in Albuquerque the same day.)

M: nothing out of the ordinary, similar to a clean light lager style.

O: Gotta give it a try, it is not too hot. a unique beer for sure. I would definitely drink again.

Poured from a bottle into a stein glass.

Look - light golden color, clear, with about half a finger's worth of foam that dissipates quickly.

Taste and Mouthfeel - taste matches the smell. It pretty much tastes like a chile, except that there is no spiciness (hot) to it. To be honest, I'm not a fan of the taste it has. Just seems like a combination that wasn't meant to be. Texture is a little on the watery side.

Overall - I've had other "chile" beers before, and although this is probably the best that I've tasted, I'm still not at all in love with the taste. Still, kudos to them for it not being horrible either.

A- pretty average looking beer. Lots of fizziness in the glass. Tiny head with a little bit of lacing. In all, it basically looks like a fizzy yellow beer

S- whoa! All I smell is chile juice. It's very upfront and awakens the nose, but not overpowering to burn your nose hairs. Get a tiny bit of mild citrus notes and cumin as well.

T- surprisingly after the smell, it's not overly spicy/hot. Nice even chile/pepper presence all the way through with a splash of citrus and light hop.

O-My first chile style cerveza. As stated in another review, this is a superb "lunchtime" beer. Which is exactly when I drank it....with my lunch at a Mexican restaurant. Not bad at all :)

A pretty basic and faceless chili beer. Underwhelming is my assessment, but I gave it a 3.5 rating for taste because you do get a light chili presence. I'm not sure, but it strikes me as being a lager as opposed to an ale. That might explain some of its smooth character. Perhaps a good 'starter' chili beer if someone is new to the style (and is afraid of too much heat) due to its mild nature. There are better examples out there.

My first chile beer. Not a fan of "flavored beer", but had a chance to try it on-tap.

If you like the taste and smell of green chiles, you must try this beer. Pronounced green chile taste (no jalapeno) and a nice mouth feel.