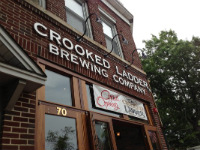 So I stopped by Crookedly Ladder today for a second look. The counter staff told me that the deal with Southampton had fallen through and the proprietary Crooked Ladder beers were once again being offered. The serving space remains small with seating for less than a dozen, but unlike the last time, the place was absolutely hopping. There are about eight taps including a guest tap; a flight consists of all eight, in 3 oz servings poured, one at a time, into the same conical pint glass, which is rinsed between pours. Although I tend to find that a bit off putting, it appears to be a Long Island "thing."

When I was in last year, the discussion at the bar indicated that the brews produced there were solidly made and quite popular locally. So much so, there is a story about a female patron who tried to bribe others to do nothing while she tried to steal the Gypsy Red poster (a favorite and very flavor forward offering). Ask about it. Based on my experience today, the local consensus was absolutely true, particularly their darker brews. Glad to see them back in business. Definitely worth a trip when on the East End.

2.5/5  rDev -33.7%
vibe: 4 | quality: 1.5 | service: 4 | selection: 1.5
Went to Crooked Ladder Brewing Company hoping to try a flight of their beers. Shocked to find that they had NONE on tap. All SEVEN of their taps were Southhampton beers, including a Pumpkin Ale in May which had more than a bit of skunk to it. Would not have normally sampled a pumpkin ale but their flights are $8 for the 7 on tap.
May 21, 2017
Rated: 3.54 by Bluecrow from New York

Reviewed by LinksusMaximus from New York

4.26/5  rDev +13%
vibe: 3.75 | quality: 4.25 | service: 4.5 | selection: 4.25
Been here twice now. Never disappointed. The tasting room is placed in a long, narrow room. Bar on the left, which stretches maybe a 3rd into the width of the room (maybe more like "corridor"). While being small, it has never felt too crowded. The bartenders [we had] were very friendly, very serviceable, and quite knowledgeable. You can grab a flight of their entire selection - i think it was 8-10 beers if i recall correctly - for only $8. $10 if you want to go home with a Crooked Ladder pint glass. Great deal.. And needless to say, they craft some delicious brews.
Jan 27, 2016

Rated by KINGRIKER1 from New York

3.93/5  rDev +4.2%
vibe: 3.5 | quality: 3.75 | service: 4.25 | selection: 4
Located right on the corner of Main Street by the court buildings. Crooked Ladder is a tiny brewery that makes some solid beers. I stopped by on a Saturday and it wasn't too crowded. They have about 6 offerings on tap at any time, and the do offer flights. Another good option in the Riverhead area, and a good place to stop in while visiting area attractions like the aquarium.
Oct 17, 2015

Reviewed by calitrie1486 from New York

4.07/5  rDev +8%
vibe: 4 | quality: 4 | service: 4 | selection: 4.25
Another cool brewery out in eastern long island. Relatively small compared to the others that are out there but definitely doesn't slack in the selection department or the quality department!
Aug 19, 2015
Rated: 3.75 by Jlabs from New York

Reviewed by JohnSand from New York

4.14/5  rDev +9.8%
vibe: 4 | quality: 4 | service: 4.5 | selection: 4
I have tried some Crooked Ladder brews before. I wasn't always impressed. But we were in Riverhead last Saturday and dropped in. There were three other couples there, two were talking breweries. We joined right in and got a flight. All of the beers were good, the IPA and Pumpkin very good. By three o'clock the place was pretty full of a mixed crowd, many beer fans. Another bartender kept things flowing. A very enjoyable afternoon, we'll be back.
Mar 03, 2015

3.5/5  rDev -7.2%
Very small bar with the taps. Samples were very reasonably priced and the free pint glass for getting a flight is a nice bonus. The bar is located in the middle of town and is very easy to get to. The brew kettles are all completely visible when sitting at the little bar drinking the samples which was neat to see the brewer actually setting up to start brewing a batch. This is a small place so I would recommend that you stop here and then head out the island a little further to the wineries that are plentiful and nearby.
Nov 22, 2014
Rated: 3.75 by Rideguy64 from Massachusetts

Reviewed by FMSmith from New York

4/5  rDev +6.1%
Must stop on the Long Island Brewery Trail. Good beers, friendly staff, kind of place that makes me wish I lived in Riverhead. Try the seasonal and no matter what season you won't be disappointed. Now that you can buy full glasses in breweries in NY this could easily be a hangout!
Aug 24, 2014
Rated: 3.5 by monkeybeerbelly from New York

Reviewed by 1nf1n1te from New York

4.64/5  rDev +23.1%
vibe: 4 | quality: 4.5 | service: 5 | selection: 4.75
Yesterday was my first trip to Crooked Ladder and it also inspired me to write my first, full review of a brewery on BeerAdvocate. Crooked Ladder is a true microbrewery located in Riverhead, NY with 15,000 barrel capacity and less than a year of operation under its belt. Everything, I must say, was excellent.

For $9, you get to taste everything available on their 8 taps. The beers on tap were as follows with style in parenthesis if it isn't obvious: CLB Kolsch, 9-0-Brew-1-0 (California Common), Gypsy Red (American Red Ale), Downtown Brown (Brown Nut Ale), Shinnecock Bock, Ponquogue Porter, CLB Black IPA and 70 West IPA.

Everything ranged from good to excellent with Gypsy Red and CLB Black IPA leading the way and the Shinnecock Bock not too far behind. Having run out of the Black IPA and having overheard my love of stouts, the bartender offered me a sample of the stout they put on in its place - a smoked stout with rye and maple - at no charge. While many breweries send you home with a sample glass as a souvenir, Crooked Ladder gives you a free pint glass.

In summation - terrific beer and a free pint glass for $9 from a brewery that I sincerely hope only grows over time. Highly recommended!