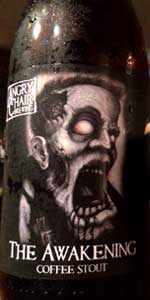 I had never been to Tampa until the trip that brought me here, and it was a very last minute decision to go after simply browsing BA for things within half an hour or so. Ordered a few of the 5oz pours that they offer so I could get a little variety, and this was the winner. Came back a couple days later for a 12 ounce pour (their largest for this one).

It's served looking just like I'd expect a coffee stout to look. Dark, with a subtle mocha head that fades to a thin coat as you drink. Served a little bit cooler than I would have expected, but that just means you're forced to take your time and savor it as you sip.

My immediate reaction on my first sip was pure shock. Earlier in the day, I'd been telling someone that Wake n Bake was the coffee beer that I'd buy ahead of Breakfast Stout. One sip, and I turned to her and said "I'd buy this over both of those if I saw it at a store." Yes, really. It's like drinking an iced coffee with just a little hint of vanilla - noticeable, but not overpowering. And when that tulip they serve it in gets tipped up and your nose gets buried in it? Think of peeling the lid back from a metal coffee canister. That's all I could think of, and I love it.

At 6.6% ABV, it's strong enough that a lightweight like me won't necessarily be reaching for a second one right away, but it wouldn't knock me over if I decided to go for seconds.

Overall, a surprising gem from a brewery I'd never heard of until two hours before visiting. I can only hope that they bottle or can this someday so I can get some shipped to me.

Poured a 750 into a perfect stout glass

right away theres tons of coffee, nice fresh roasted coffee.
taste is were its at. very similar to the coffee flavor in KBS, the giant body makes it feel imense. lots of flavor for a non ba stout.
body is thick and heavy, im having a hard time this is 6%, my buzz is telling me its realy closer to 8-9%, although no abv is on the bottle? not required in florida.
very good stout, highly recommend. definity split a bottle tho, 75% is amazing, the last 25% it starts getting super sweet.
angry chair definity knows what their doing.

thanks to ravishing44 for this one!

A great milk stout, good coffee nose, smooth mouthfeel, drinks very well cold and maintains as it warms. At 6.6% it extremely flavorful and drinkable. Unlike Stone's coffee milk stout this one isn't bitter. There is a slight sweetness to the finish due to the vanilla added to balance to coffee. These guys make great everyday stouts

Overall. this beer is the best coffee stout that I've had, only outranked by Founders KBS - even their breakfast stout is blown out of the water by this guy. Amazing.

Crowler from Scott. Very coffee, with a bit of mustiness as crowler has been out for two months. Coffee aroma. Richer brown colour. Fine, but likely better on tap.A touch thin.

Reviewed from notes. Had on-tap at Angry Chair. Served in a snifter.

S: Roasted coffee beans, lactose sweetness, and a light chocolate or cacao presence. Just a hint of char (though no smoke presence) to the deep roasted malts.

T: Roasted coffee, deeply roasted malts, and lactose sweetness. Almost a touch of powdered milk. This isn't overly sweet at all. Notes of leather and old book in the malt bill. Some dryness from the hops and roasted malts at the end.

O: Very tasty with a nice mouthfeel. It's not exactly complex,...though how complex can you make a coffee stout? Solid, and well-executed for sure.

Tasted in a Rastal Teku from a crowler on June 21, 2019. Coffee milk stout brewed with vanilla beans and cacao nibs. Made with Buddy Brew coffee. Tasty sweet stout.

Ap - Intense darkness with subtle dark brown highlights. 1.5 FB head of small bubbles that slowly and lingers throughout first sips. Minimal legs with a light viscosity upon swirling.
Ar - Intense coffee roast aroma up front. First and foremost. Seamlessly blends in with a noticeable roast malt (roasted barley) following. Knowing there is vanilla in it I might be able to pick up suble notes but nothing noticeable in the intense roasty-coffee theme. Subtle raisin ester notes as it warms. No appreciable alcohols, diacetyl or hops.
T - Very similar to the aroma. Intense, tongue-puckering roast notes reminiscent of coffee, dark cacao and char. Light cherry and raisin esters into the mid taste. Some other flavor mid taste that I can not quite put my finger on. Perhaps the vanilla? Almost a almond/nutty fluffiness of a flavor (on second review most definitely a vanilla-like character - think fresh vanilla beans not vanilla flavored). Ester notes continue into the finish with a pleasant spiced fruit character with the tail end of the coffee spice and the lingering dark fruit esters. All sweetness from the beer is balanced by the roastiness with no appreciable hop character. No Diacetyl, alcohol notes (unless they are what is enhancing the perception of the esters in the finish).
Overall - Intense, coffee stout with subtle vanilla notes. If I didn't know it had vanilla in it I actually would probably not have noticed it. Well balanced beer with roastiness balancing residual sweetness. Medium to medium heavy mouthfeel. No slickness alcohol solvency. Light roast astringency up front that quickly fades. Very well done. What a coffee stout should be, a stout enhanced by coffee! I would play with the vanilla more as this does not seem to add anything noticeable to the beer (this was the main detractor from the score for me). My first from this brewery and I will be back for more!

Pours black and opaque. 1+ finger khaki head is quite thick. Recedes a little quick but does leaves nice spiderweb lacing.

Like the aroma, thick, heavy coffee flavor. Dark and roasty but with an underlying sweetness. Caramel, chocolate, and molasses. Some vanilla and cream.

Medium body going towards the thick side. Smooth and creamy. Moderate carbonation. Coffee is lingering but also the chocolate notes.

Really nice coffee stout. Thicker than the 6.6% abv lead me to believe going in. Very smooth.

Thick, syrupy body is opaque and essentially black.
Coffee dominates the aroma and , to a lesser extent, the flavor as well. too sweet; surprising given the strong dark coffee aspect.