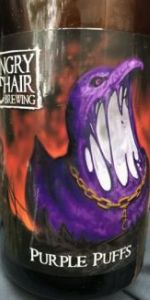 4.03/5  rDev -2.4%
look: 4.5 | smell: 4 | taste: 4 | feel: 4 | overall: 4
Darker purple body, one finger white head. Fair retention, no lacing. Smell is essentially kix cereal; sweet berry along with a bit of grainy sweetness, bit of vanilla sweetness, cocoa bitterness to balance it out some. Light acetic acidity. Flavour follows, with a fair bit of lemon and berry sweetness to it. Again, tastes like a cereal, odd indeed. Mouthfeel is lighter bodied, refreshing with a nice marshmallow and berry sweetness. A strange beer, it works but still remains a bit off.
May 06, 2018
Rated: 4.51 by PrestigeWorldwide from Michigan

Reviewed by DVMin98 from North Carolina

Purple Puffs pours a ridiculous dark neon purple color and hazy to suggest creaminess and weight. A tarnish pink froth begins rolling onto the nose with the curious, tantalizing and highly alluring scent of both dark berry and marshmallow. Beer or dessert? The nose can hardly tell. But its taste is succinct with pulled candy, fruit sweetness and a hint of sourdough.

Juicy, bold with dark fruit, and relaxing from its sweeter introductions, the expression of blackcurrant and blackberry begin to shine with a robust fruit forward taste and a peppery tartness that glides right into the underling sourness of the wheat beer underneath. Lime, lemon, green apple, gooseberry, kiwi and melon all play second fiddle to the berry additions but provide a rounded sourness and an understated set of complexities. A finish of creaminess and vinous spice are suggestive of marshmallow but with balance.

Medium bodied for sour ale but shedding its sweetness swiftly, the linger of vanilla offers support and balance for a long linger of berry spices along with impressions of pickling brine from the sourness of ale to round out the session. Both refreshing and savory, the ale lingers medium long on the after with hints of beet and vinegar in the background.

Reviewed by bcp5296d from North Carolina

Smell starts out a little astringent, sharp and metallic, which is a little concerning, but it's quickly followed by candy necklace, Smarties, raspberry-blackberry Pixy Stix, and yes, even a sprinkle of artificial Marshmallow Peeps. This is childhood in a glass, spiked. However, as I dig more into it, the smell becomes dominated by an eggy pancake batter...? Or, actually, it reminds me more of freshly baked popovers. Weird? Yeah...not sure I expected anything else with this one--the label isn't exactly deceiving you here.

Taste starts quite tart and very crisp, but also a little nondescript, and very quickly and unexpectedly ends with a super dry, chewy finish. And, imagine this, as you continue with your second swallow, it's apparent this is also really sweet--say it ain't so! It actually tastes like cereal marshmallows, paired with a sour but mellow raspberry-blueberry-blackberry-currant melange. There is a hint of an unusual funk that's reminiscent of, but not quite like, a Gose, but I don't know how to describe it. It's a little like tap water, very mineral-heavy. As you sit with it, it does become less dry.

Reviewed by aasher from Indiana

4.52/5  rDev +9.4%
look: 5 | smell: 4.25 | taste: 4.5 | feel: 5 | overall: 4.5
This is one very unique beer. The beer pours a cloudy atomic blackberry purple in color. It looks like beet juice with a nice and foamy bright pink head. The nose is a mix of raspberry and marshmallow. It's an odd mix but it works. The mouthfeel is the game changer. The marshmallow adds a very distinct, unique creamy mouthfeel. This was a big hit with everyone that tried it. I'd definitely buy this again.
May 28, 2017