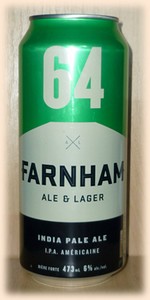 The flavor has a strong toasted malt start with a notable hop bite in the swallow and aftertaste. Full bodied but with a sizable effervescence. The flavor has a touch of earthiness to it, but the hop dominates.

Way too malty for the style. Letdown.

Amber-red in color, with small head that disappear quickly. An overly sweet smell, with bread hints. Overly sweet in the mouth too, way too malty with almost no hop taste. Really underwhelming.

From a can. This beer is not an IPA, as others have noted, but more of a Canadian interpretation of what a really sweet IPA should be like. I mean, it's sweet, it's malty, and then, at the very end, it's bitter. That's an IPA, eh? This is a curiousity that I like because it shows how much taste and culture dominates beer. It's weird and tastes *just like every beer in Quebec to me* which is to say, malty and sweet. Except they made it better, because it's an IPA, eh?

Not dissimilar in appearance to an Irish red, honestly. Lacing and head retention were great. On the nose I get just about an equal mix of slightly citrusy hops and sweet caramelized malt; both are rather subdued though. On the palate malt leads the forefront. It is rather bitter however, just not that "hoppy" or citrusy. It's maybe even a bit harsh, in terms of bitterness. A pretty creamy body, which probably has a lot to do with the head staying around forever. Really this just seems like a slightly stronger and much bitter Irish red. That being said I rather like this beer and it's okay.

A:
Pours a clear ruddy amber with a little finger and a half of tan head that stays a scummy film throughout. Meh retention; spotty lacing.

M:
Medium bodied, even, coating, and creamy with a tingly finish and good carbonation. Supoib!

O:
Nice tasting IPA (although it could definitely pass for an APA—or maybe American Amber).
First of all, it is nice to see cans. It pours pretty unimpressive, but I think that further is evidence of the can's appeal—not to mention portability; and is generally a tasty beer. I think it is deceiving how malty it smells compared to the taste, but it has a nice woodsy/English hop profile and is pretty damn drinkable. Tasty beer to celebrate my return to La Belle Province.
Would have again; worth trying, would be a good intro to hoppy beers for someone curious to get into them.

Cycle69 from Canada (ON)

Reddish tan color beige head goes to thin beige ring.Fine carbonation.
Flowery hops and some malt.
British IPA flavor with extra bitterness. It is on the British IPA side apart from some extra bitterness.
Easy to drink. You feel some of the alcohol afterwards. Perhaps too much watery feel? Well managed carbonation.
A nice balanced IPA on an Sunday afternoon.

Pours a clear amber. This doesn't taste much like an IPA. Quite sweet on the malt; limited hops in the aroma and flavour. Some caramel notes on the finish.