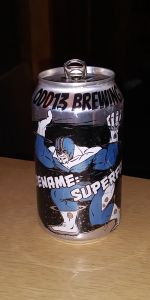 Notes: He controls mass and density, primarily of liquids. He uses that power to to ensure perfect fermentations of beers. That's not exactly what his creators had in mind when they remade him, but they can no longer control him. Because of the remaking process, he no longer knows his name. He just knows the codename they gave him: Superfan.

Codename: Superfan is a deliciously modern take on the American IPA style, brewed with a variety of juicy American hops from the Pacific Northwest.

This is a CANtinuation of New CANned Beer Through Tavour Sunday (Week 693), brought to you by The CANQuest (tm)!

From the CAN: "Codename: Superfan is a deliciously modern take on the American IPA style, brewed with a variety of juicy American hops from the Pacific Northwest."; "Unfiltered. Haze is expected. Drink fresh."

Understand, my beef with the current hazebro trend is NOT the haziness, per se. I have always advocated for less filtration since more strips away flavor, but when you have to artificially create haze through the use of lactose, I draw the line! For one thing, it really sets off my GIRD in an unpleasant way.

Since they copped to an inherent haze on the label, I CANducted some in-CAN agitation before Crack!ing open the vent. My next move was an inverted Glug since this is a no-holds-barred situation. It puffed up with an impressive two fingers of dense, foamy, rocky, bone-white head that suddenly exhaled & fell, leaving loads of lacing behind. Color was a deeply-hazy/lightly-cloudy Yellow-Gold (SRM = 4 -5). Nose had both a grapefruit citrusiness and a tropical fruitiness. It will be interesting to see how this plays out. Mouthfeel was medium. The taste was very bitter, with tastes of grapefruit juice, rind, pith & seeds along with an earthy maltiness that was slightly cut by a sweet tropical fruitiness, but only slightly. This might not be everybody's cuppa, but for this self-described, self-avowed hophead, it was just the sort of thing that I crave. I gravitated to AIPAs initially due to their high IBUs, especially in comparison to their EIPA counterparts, but now tropical fruitiness is the trendy craze & I am left cold. Mmm. The more that I drink of this, the more that I like it. Warming, the tropical fruitiness became more assertive, but it was held in check by the earthiness of the malt and the bitterness refused to budge. I CAN live with this type of commingling of tastes and I have encountered this use of both PNW & Southern Hemisphere in other recent beers, so perhaps that is the coming trend. I have nothing against tropical AIPAs, per se, but they need to be their own separate style. No bitterness = no Bueno, IMHO. Finish on this one was dry, bitter & just what I needed to really jump start this excursion!

From a 12 ounce can picked up last week in Denver. Fresh batch that had arrived last week although I noticed these guys are doing the "Best by" labeling. Dafuq?

Aroma is a blend of pungent mango, papaya and pineapple and tart strawberries or blueberries. Interesting.

When I first drank a few cans of this last week in Denver I remember the flavor being grapefruit heavy but I was high as a bat so couldn't quite trust my tastebuds. It does have that grapefruit zest and pith so I wasn't completely out of my gourd. However, there's an unripe mango flavor that should not go unnoticed here as it is satisfying. A light passionfruit sweetness complements.

I've gotta give it up to the drinkability of this. Easy-drinking and juicy means I'm drinking it way too quickly. Zestiness, prickly mouthfeel and a dry finish round this beer out well.

A-Another dusty yellow murky NE-style IPA.; ho hum The head is off-white and soapy with decent retention and nice lacing on the glass. Its a look that only a mother could love, but I can't knock it too much because it is intentional and true to style.

S-The aroma is pleasing, but not spectacular. Hops are fruity and citrus forward with suggestions of orange zest, pineapple, green grass, and hints of pine. I sniff some white bread dough and a bit of medicinal bitterness (that may be the yeast, may be some alcohol, or it may be the hops...not quite sure).

T-The taste tracks the smell pretty closely. I pick up more bitterness on the finish that I would have expected, but it is never bitter in the way a traditional or West Coast IPA might be bitter; more of an orange rind and pine zest than dank or leafy. Otherwise, I taste notes of citrus, some lemongrass, and a lightly acidic pineapple flavor.

M-The body is medium heft. It has a mild, semi-creamy carbonation, but this beer is less creamy than n00b, which I also tasted.

O-This is a pretty good beer, but I like n00b more. Nothing here is offensive, and I'm sure that some will find a lot to like, but I just could not get fully into this one.

Very good. Flavor fades kind of fast. Not as sharply carbonated as I like.

12oz can, no evident canning date. Served in a snifter glass.

I had to revisit this review because the original "final" Superfan recipe has been adjusted, with a bit more dry hopping and carbonation. I have to hand it to Odd 13 for all of their tinkering and experimentation. They've made a lovely IPA that brings out the same juicyness and drinkability of the renowned NE IPAs.

This one pours a fairly hazy light orange, with a small head and tons of lacing.

This smells like peach, some sweet lemon, floral hops, and herbs.

This is fairly tasty. It's got a really soft creamy taste and feel to it, with great peach and lemon fruity hop flavor, and a bit of floral and herbal bitterness.

This is possibly a little too slick, but it's definitely very drinkable. There's a normal level of carbonation.

This was a fun beer to try. The mouthfeel is a little off, but the taste is right on.

T:
Also fruity but with more pollen-like bitterness coming through. (4)

O:
Nice western take on the NE style.
It looks pretty nice on the glass. Yeasty to the point of having plenty of little "pills" in the bottom of the can. It is fruity aroma-wise and more bitter flavor-wise. Pretty decent beer. I'd have it again. (4)