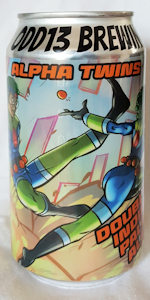 Great Fruit forward hop blast. Orange, lemon and mango erupt in your mouth. The best thing about this beer is the mouthfeel, like velvet!

12 oz can, canned on 7/9/19. Pours very hazy dark yellow with a medium creamy white head that goes to a film that leaves some lacing.

The aroma is sweet tropical fruit with resiny hops with some vanilla.

The flavor is sweet tropical fruit and wheat malt with a tangy resiny bitter finish. The mouthfeel is medium to full bodied with low carbonation.

"Alpha Twins, activate!" ...activate on the nose, that is, and with a host of tropical, orchard and tropical perfumes. Richly hazed, the golden beer settles in the glass like straight up orange juice. Its frothy white cap precedes a richly molten grain sweetness of dough, cream and spongecake.

And as the hops unfold on the middle palate, a curious blend of citrus reveals a radiant, branch ripe tangerine flavor mixed with pink grapefruit and a hint of lemon. Succulent tropical flavors of mango and pineapple offer a tanginess of passionfruit before richer flavors of pear and sherbet. Moderately bitter, a soft suggestion of fresh grass clippings, chive and verbena closes the session smoothly.

Medium full on the palate, the character of milkshake keeps the ale seeming creamsicle-like with a bitter sherbet continuing in a long, succulent and stemmy bitterness that carries into the next sip.

A- A hazy golden straw with a two finger white head

O- A good DIPA, but I don’t think age was friendly to this beer. Opens up as it warms.

Served cold into a pint glass.

BODY: Milky hazy yellow-orange body of poor vibrance. Opaque. I see no yeast/lees within, but it's probably too murky anyway. Pulpy.

AROMA: Guava, lactose sugar sweetness, wheat, oat husk, citrus, melon...it's more akin to an overpriced hipster juice (e.g. Odwalla, Naked) than to a beer proper. I find little if any concomitant hop bitterness to accompany the shallow hop flavours, and the reliance on lactose sugar for sweetness was a mis-step.

Suggests an imbalanced (overly sweet) expression of an imperial IPA with timid hop pungency and limited depth of flavour.

Aromatic intensity is quite mild for an IIPA.

Neither Azacca nor Citra are well showcased flavourwise. Lacks the juicy citrus of Citra and the vivid tropical fruit of Azacca (though Azacca does contribute more to the beer than Citra, with some shallow mango, guava, and melon coming through).

Pale malts and 2 row get lost in the onslaught of sweetness from the lactose sugar. Rye's signature spiciness is absent; I imagine it was 20% or less of the grain bill...basically a waste if you actually want rye to contribute flavour. The same can be said of wheat. The oats are there for protein haze, not for mouthfeel or flavour.

Hop pungency is severely limited. Depth of flavour is poor. Not a beer with vivid or expressive hop flavours by any stretch, and the hodgepodge of specialty malts hasn't elevated this above your run-of-the-mill widely distributed IIPA. Indeed, it probably has less hop punch than even Sierra Nevada Pale Ale.

TEXTURE: Pulpy yet slick. Soft yet unrefreshing. Smooth, wet, lumpy...I'm not sure what they were after here. It's well-carbonated, to its credit, and it isn't scratchy, gushed, hot, boozy, or astringent or anything, but I figured it'd at least have a juicy presence on the palate given its marketing - and some hop oils would only help. Medium-bodied but surprisingly filling; that unfermented milk sugar has upped the carbohydrate and made this a meal in a glass.

OVERALL: I'd peg this for 8-9% ABV if I tried it blind, and its obvious ABV coupled with its filling feel on the palate limit drinkability. Odd13 is really steering into the skid of the hazy IPA fad, but I'd like to see them dispense with this kind of nonsense and return to form with more hop-emphatic work like N00b or Codename Superfan.

An imperial IPA for the housewife-who-makes-an-Odwalla-run-after-spin-class demographic, Alpha Twins will fail to dazzle the discerning drinker and will disappoint those who love Codename Superfan and have their fingers crossed for a souped up variant of more of the same. Nevertheless, its softness and mellowness are worth commending in a style traditionally known for its assertiveness and aggressive hop regimen.

This beer could sway me towards the New England/hazy IPA side of things. Well-rounded with some incredible density and complexity in the aroma, flavor, and mouthfeel. This could be legendary stuff...

this is the best thing i have had from odd13 in a long time, you would swear there is fruit in it! another hazy hoppy beer, but this one seems more refined than so many of them have been lately, on tap at finleys its uniformly cloudy and faintly orange yellow, heady and creamy, with this crazy aroma that carries into the flavor, straight up fresh and ripe mango, what are these hops?! here the rawness of it is part of what makes it, like the dry earthy cereal grains hold up the hops, and all the hoppy particulate still here, being as fresh as it is, makes the beer unique and over the top, but so drinkable too for a double. i also recognize that this has lactose in it, which i have generally disliked in the style, but here it lengthens it and balances the bitterness thats still in here. i cant believe how fruity this is, its unreal, mango first which is uncommon to say the least, pineapple, green apple, lemon curd, its amazing. its also oddly dry for what it is. i thought i knew what i was getting with this, like, i have had enough beer from these guys to generally know what to expect, but this is totally unique and surprising and i need to know more about the hops, something new i would think, or some incredible combination or process. its hoppy in a new way, mind blowing that there isnt actual fruit in here!!! drinks way too easy for its size as well...

Aroma is fruity, but it is slightly muddled. Get slight grapefruit, slight tangerine, pineapple, and floral. Lots of lactose creamy sweetness with some oats and doughy malt coming through as well. More or less a sweet, creamy fruitiness, and that's about it.

Taste is much more vibrant, but could still be better. Get ripe pineapple, grapefruit, floral, and tangerine. Lots of lactose milk sugar presence along with some doughy malt. Get a slight spicy component, possibly from the rye or a slight yeast burn. Reminds me of a "milkshake" DIPA.

This is a creamy, drinkable DIPA, but there's not much going on for what it could be. The aromas and flavors are muddled. With some work, this could be great.