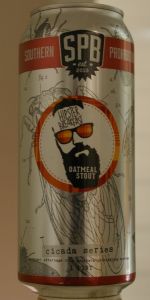 Once more, we have a CAN courtesy of my local, in-person trader, tone77, who CAN show up on my porch whenever it is CANvenient for him. He brings such great beers and is outstanding about returning the empty CANs for further transfer to Jeff Lebo. Viva The CANQuest (tm)!

The loud Crack! revealed another brimful craft CAN and although it was a pounder/pint CAN, I decided to employ an inverted Glug. There was an initial pseudo-cascade, followed by the creation of three fingers of dense, rocky, deep-brown head with decent retention. Color was Black/Opaque (SRM = 44) with mahogany highlights only at the edges. I was a little surprised by the nose since it was as roasty as the 'Gansett Autocrat from earlier today. It turns out that Oatmeal Stouts CAN be roasty. In this case, it was coffee & dark chocolate odors that caught my attention. I will readily cop to the fact that Stouts are not my bag as a self-avowed/described hophead & I CAN always get smarter about them. Mouthfeel was creamy and smooth on the tongue, almost like a dollop. The taste had a very roasty bitterness, more toward black coffee than dark chocolate, although there was enough sweetness to put me in mind of it, also. Man, this was really rich! It was like an extremely rich brownie! I kept thinking that it needed vanilla ice cream or something to go with it. Suddenly, it hit me - they just began CANning Founders' Rübæus. I will review that next & set some of both aside for a blend. Unadulterated, the finish on this one was bittersweet, more like unsweetened, vice dark, chocolate. The coffee flavor was now undeniable, especially as it warmed slightly.

Again I don't know why this makes you write a review. I have no review to write. This is an optional field. Blah blah blah

Pours out dark brown to black with ruby highlights and a tan head. Smells of roasted malt, toffee, and English hops. Tastes bready with roasted malts, dried fruits, herbal hops, and caramel. Mouthfeel is smooth, creamy, and full. This is an excellent oatmeal stout. Very English in character.

Pours black with a thick kahki head with some staying power. Smells like dark fruit and coffee with a little bit of bitter baking chocolate. Taste is moastly the same but less fruit and more bittee chocolate. Chocolate and hops linger for a while on the finish. The feel is right where it should be for a relatively lower alcohol oatmeal stout, I always prefer them thicker but this is nice. I would have no problem drinking this beer again. Unremarkable but, for the style, very good.

A: pours black with a half finger of tan, thick head. good retention and lacing.

M: good mouth feel. I would prefer it to be a bit thicker, but that is personal preference. It is appropriate for the style.

great job!! this is a tasty beer