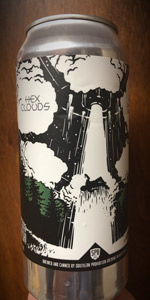 CAN: 16 fl oz pull-tab. Cost $4.59 USD plus tax at Freret Beer Annex in New Orleans, LA for the single can. Pink-green shiny label art with alien themes. No best by date appears anywhere on the can.

~7cm head height. Off-white head colour. ~8 minute head retention (which is nice at this high an ABV). Could be frothier and creamier, but it's robust enough.

Hop aromatics seem faint and subdued for an imperial IPA, to say the least. If it weren't for the hint of alcohol warmth, I'd peg this for a pale ale given the seeming lack of bold hops going by the aroma.

TASTE & TEXTURE: Has a silky soft mouthfeel that seems to be Southern Prohibition's go-to texture when brewing these new world double dry hopped IPAs. Smooth, wet, medium-bodied, approachable, well-carbonated, not unrefreshing. Not pulpy either, like many of the India Odwalla Ales floating around right now.

Hop profile is fruity with tropical leanings, not piney, grapefruity, floral, herbal, or grassy. Papaya, tangerine, pineapple, faint lychee, citrus rind. The fruit notes aren't distinct or clear, blending together murkily. Hop pungency is limited and depth of hop flavour is disappointing...this is billed as a double IPA but it doesn't have the hop pungency of one...maybe an extra pale ale at best. Alcohol warmth is present throughout.

Pale malt and flaked wheat keep any hop bitterness at bay. Flavour duration is average. Flavour intensity is below average, to its detriment. Somewhat shallow for an imperial IPA, to be sure.

It's not dialed-in balance-wise, and its hop profile isn't great. Neither Amarillo nor Simcoe is showcased well, which is a damn shame since Amarillo is my favourite hop. No resins from Amarillo, no oniony/garlicky Simcoe notes. This is all vague tropical character from New World hipster hops.

OVERALL: I don't see why anyone would buy this over any of the myriad superior cheaper imperial IPAs out there. some of which (e.g. Lagunitas Sucks) are widely distributed. ~$5 a can is outrageous for an imperial IPA of this quality, especially coming from the poorest state in the union (not that price affects my ratings). It's drinkable but it has a more noticeable alcohol presence than most beers I've tried in the style, in part because the big hop flavours just aren't there to cover it up.

If this is a top 10 beer from Mississippi, remind me not to move to Mississippi. SoPro has some respectable beers, but if we're being honest this is average at best. I imagine Lagunitas and Elysian are sitting on shelves in Walmarts across the state...by all means buy their beers instead of this.

Reviewed by Bloodbuzz99 from Georgia

Reviewed by bstoos from New York

Rated by Johan69 from Louisiana

Pours an awesome hazy golden yellow, with about a finger of thick, frothy foam. As it settles into the beer, an even layer of heavy lace is left around the inside of the glass.

Juicy, overripe pineapple greets the nose first. Balancing hints of tropical fruits play with citrus and melon subtleties. Sweet, juicy, and without any residual hops or bitterness to be found.

The flavor profile perfectly contrasts those qualities found on the nose. Bitter citrus and floral hops come out the gate first, followed closely by a taste of pineapple rind that leaves a subtle lingering bitterness that compliments the piney hops that emerge as well. A complex hazy, one that really takes more than a few sips to fully grasp.

Smooth, juicy, creamy. A medium but aggressively sharp carb works well to keep the hops and citrus bitterness at bay. Finishes slightly sticky, and with a warmth on the back end.

Reviewed by NolaHopHead from Louisiana

4.52/5  rDev +7.4%
look: 4.75 | smell: 4.5 | taste: 4.5 | feel: 4.5 | overall: 4.5
16 oz can. Pours deep murky orange with tight two finger head that just sits. Citrusy melony aroma. Tastes like it smells but with the citrus and pineapple being more forward. Sweet ripe melon notes are there but are not dominant, come out more as it warms. Really solid back end dank weed and grapefruit peel bitterness, grassy notes at the very end. Could argue there's a little too much going on in the back end, lingers a long time. Medium soft feel just slides.
Oct 31, 2017
Rated: 4.92 by hazedandconfused13 from Mississippi

4.54/5  rDev +7.8%
look: 4.75 | smell: 4.5 | taste: 4.5 | feel: 4.75 | overall: 4.5
It pours super hazy to the point of being fully and completely opaque. Nice two finger head with longish retention. The aroma is fruity, especially tropical fruits, and piney, with some nice and prolonged dankness at the end. The taste is malty upfront becoming progressively more bitter, finishing with a nice and intense dank aftertaste. Chewy mouthfeel with hardly any perceived carbonation. What a tasty beer!
Sep 25, 2017
Rated: 4.5 by kjkinsey from Texas

Orange juice, but so much more, due to wheat and extravagant use of newish Wai-Iti and Vic Secret hops, along with Citra and Amarillo. Juicy, fruity, earthy, spicy and dank, soft and pillowy New England IPA in the Deep South.