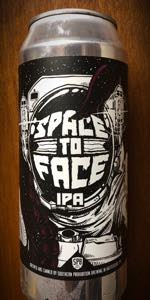 Appearance: Pours a very cloudy goldenstraw with a head that builds to three fingers above; excellent retention and a few shards remain

Smell: Hop perfume, surprisingly sweet, with pineapple and berry tones topped with a spoonfull of sugar

Taste: More of a honeyed than sugary aspect on the palate; the tropical fruit is overwhelmed by the sweetness; there is a bit of bitterness, that appears after the swallow, and battles with the sweet elements

Overall: Not sure where SoPro was headed with this but I did like the label art; the beer needs to provide more tropical fruit, less sweetness and to remember that it is supposed to be an IPA

APPEARANCE: Copper body of average vibrance. No yeast/lees are visible within, but it doesn't have the clarity I'd expect in a filtered IPA. Not turbid, but there is some haze to its body.

Head is frothy and off-white, starting at ~5cm and dying within 6-8 minutes.

Looks average for the style.

Certainly generally enticing, but it seems to be on the sweeter side for an IPA going off aroma alone.

TASTE: Definitely one of those Johnny-come-lately "milkshake IPAs," bringing lactose sugar into the fold where it isn't needed and reducing bitterness at the expense of hop flavour and pungency. There's some citrus and tropical fruit flavour here, sure, but I wouldn't say it brings out the best in either Citra or Galaxy hops and both hop pungency and depth of flavour are limited. Pale malt is the glue holding this together, but the lactose already brings all the sweetness this needs to counter the minimal hop bitterness present...between the unnecessary lactose and the pale malt sweetness, this ends up imbalanced.

Vanilla is in there, further confusing the flavour profile. What happened to the days when IPAs were about showcasing hop varietals?

No flavour from the spelt or oats this is ostensibly brewed with.

OVERALL: Odd sweetness and a lack of adequate Citra and/or Galaxy flavour make this IPA a dud. Sierra Nevada's Pale Ale has more hop pungency than this so-called IPA. It's drinkable, sure, but boy is it filling too. I'd like to see them lose the lactose, ditch the dry hopping gimmick, and commit to the hops they selected. I don't get why anyone would regularly pay $4+ a can for this when far better IPAs are available at much better prices (here in New Orleans, even Sculpin - an IPA historically considered "expensive" runs $12 for 72oz. Why would I pay $16 for 64oz of this mediocrity?).

This beer pours a mango juice golden yellow, completely hazy and with a creamy white head of foam that settles slowly and leaves heavy lace in its wake.

Overripe tropical mango and pineapple burst onto the nose, with subtle complimenting notes of citrus and just a tinge of hoppy bitterness on the tail. Big, bold, and juicy as hell.

More of the same in the flavors. Overripe mango and sweet pineapple ring true, with a slight piney hoppiness in the finish and just enough of a subtle booze flavor to work perfectly. Huge tropical flavors.

Creamy, juicy, and smooth. Hints of a boozy warmth in the finish. An absolute bomb of tropical flavors and creamy, juicy nectar.

Rated by masseymi from Mississippi

Review is of the 2022 update to the OG "purple tentacle," after the variants went more tropical and dank, and one even a bit spicy. Pours tangerine-gold, and milkshake cloudy, with 1- to 2-finger, thick, creamy, oatmeal-dimpled, near-white head, with excellent retention, leaving thick rings of lace down the glass. Interesting aroma of (spelt) malt off pour, then sharp aroma of tangerine peel joins, with some peach as warms, and then lactose triggers tropical milkshake smoothie. Moderate carbonation to start, then sharply hoppy citrus, over the creamy oat body, which carries into nicely creamy, lactose- influenced but still-biting, peachy and citrusy finish.