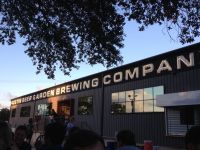 A bit of a goofy experience at the end of a very nice day..

Saturday at 6 pm. Parking lot full and Austin is NOT parking friendly. Anyway, made our way there. Very crowded, very noisy. Service folks did pretty good, but our first beer order was incorrect. Food was excellent and the beer very good. Want to go back at a less hectic time.

a fun place to visit when you are in austin for sure, we had a great time here. they have an awesome outside area between when you park and where you enter the building, a cool space with patio furniture, picnic tables, shade trees, and a mellow vibe. inside it has a noisy beer hall vibe, with picnic tables as far as the eye can see and a long bar straight back. attention seems to be sort of directed to a rather large stage area, looks like they have some pretty serious shows in here, audio and lighting equipment all over the place, high energy in here. lots of workers though, several folks behind the bar handle the crowd well, folks line up at an ordering window but nobody waited long and our bar service never suffered, quite professional. they had a cool list of beers, a fair few of them, nothing overly ambitious on paper, but i didnt miss that. they had three or four pale lagers, you know, a czech style pils, a helles, and american lager, it seems like a lot, but it works in the texas heat, and big pours of pale lager is awesome, no complaints from me! i liked all of them pretty well, and enjoyed an apple sour as well. we had a killer salad with all kinds of interesting things on it, i dont usually think of food as refreshing, but this salad was at least as refreshing as the lagers i was crushing in here. a bit busy for intimacy here, a bit loud for serious conversation inside, and too hot to chill outside this time of year, but a brewery doing some nice beers and well worth checking out! id love to see some music here next time!

I like the vibe. Open, bright and clean. Nice outdoor space. Love the aroma of a brewery making beer.

ABGB has some nice beers but still a limited selection. Maybe provide a guest tap or two.

No table service when I was there and the lady behind the bar was just a bit too casual.

Awesome brewery with award winning beers, delicious food, and stellar live music. Spacious indoor and outdoor seating, and a separate garden area. Lots of parking. Dogs allowed in the patio area. Flights and growlers to go...did I mention great beers?! If I lived in Austin I would be here all the time.

I've only been to Austin twice, but this is one of my favorite places for four reasons:

1- the beer is good... very good! I'm a brewer and I was impressed. It's not blow-you-off-your-feet unusual or weird stuff, but it's quality solid styles that are done right. And keep in mind, they're catering to the masses, they're not making odd one-off's that they can ship all over the country, they're mainly selling beer to be consumed on the premises, and if they can get the masses to drink a beautifully balanced Saison, then more power to them!

2- the bands are good, and the venue sounds good (although I'm not sure how it would sound if it wasn't pretty full, which it always is).

3- the food is good as well. Great pizza.

4- the atmosphere is great both inside and in the parking lot (that sounds ridiculous I know, but it's true).

Solid addition to the city's beer scene. Solid beers here and amazing pizzas. Getting in and out can be a pain the butt. Huge parking area though so that's a plus. My only REAL gripe? Some of the people working here have a 'cooler than you' attitude. I prefer to have my pizza and beer without that sh*t.

Another of Austin's warehouse style breweries, although this one actually has food! Nice wide selection of food and drinks to enjoy here. This brewery even has cider available for those who do not want or like beer. Pizzas are thin crust and come in many different options. Stage for live bands on the south side of the interior as well as a nice outdoor seating area are available for when the weather is nice as well (cool and rainy when we were there so not many people outside). Somewhat dark interior and noise level is not too bad.

They did a nice job with the build out on the inside. A long bar, plenty of communal, picnic style seating. I was expecting there to be some kind of actual beer garden though. Not just a few more picnic tables out on the parking lot. Oh well, the inside is clean and cozy in that minimalist industrial way. They also have a stage for bands that play here often.

Order at the bar, or grab one of the the many seats there. The bartenders are on top of everything. No complaints at all with the service, everyone is supper personable and in tune with the craft beer scene going on in Austin right now.

They have about 8 taps of their beers on at any given time, and the brewer use to work at Uncle Billies. Honestly though, the only beer I had that I would get again was the "We'll See You, Baby" sour. Not a Berliner Wiesse cause they don't use wheat, but just a low ABV sour that is crisp, tart and refreshing. I was not a fan at all with the Helles lager. It had some pretty pronounced buttery popcorn, maybe diacetyl going on. The Pils was standard, but drinkable.

I had a pizza and some deviled eggs. The eggs were border line pathetic. No flavor, except for the jalapeno that was in the deviled moose. At $4, it seemed like a bargain, but it only came with two small halves. I guess I was spoiled, just being at Salt & Time the day before. The pizza was kind of generic as well. Thin, sloppy New York style crust that is soggy. The sweet peppers seems a little old, and overall just did not hit with me. They also have this ridiculous pizza with about 13 different toppings. It is over kill in every sense, and not something I particularly want to try.

A decent enough spot for a beer. Though not close to one of my favorite breweries in Austin. Outside of their sour, everything left me wanting a little more, but it is an incredibly friendly spot, and the prices per pint are some of the lowest in Austin.

Austin Beer Garden Brewing Co. is a fun place to hang out and a fantastic place to get some of the most well made, tasty beers in Austin. The brewer Brian Peters, formerly of Uncle Billy's makes some amazingly crisp, clean, dry and hoppy beers, but they do branch out a bit from those styles as well. Their mainstays are all delicious and the seasonal/rotating taps have all been very enjoyable as well.

The food here is a hit and the pizza is some of the best in town. Add in weekly live music, a cool picnic style seating set up and you've got a winner here. Highly recommended place to visit for awesome beer and grub.

Quite a neat new brewery / beer garden in Austin, always welcome to have more beer gardens in our lovely city. Great use of an old warehouse and live music a couple nights a week is also a definite plus, but the beer has quite a bit of room for improvement. I'm a huge fan of the helles style but their's is just kind of a disappointment and doesn't do justice to the style at all, also much too close tasting to the one of Uncle Billy's (whom one of the owners was previously associated with and isn't great either). Big Mama Red was also a pretty mediocre beer, maybe slightly better than the run of the mill amber. The Industry pilsner was pretty tasty, though not quite up to comparing with other Austin brewer's pilsners. Great pizza and a really nice outdoor area. Really hope they improve their helles recipe, no one else in Austin really bothers brewing one sadly (….except Live Oak who smoked it and kind of ruined what might of been a good beer). Definitely recommend ABGB and will be going back myself.

Visited this brewery on a Saturday as part of a pub crawl with the Bexar Brewers Homebrew Club from San Antonio. The staff was friendly and helpful and did not bat an eye at 30+ hungry brewers descending on them at lunch time.

The outside of the location looks like a warehouse or work shed, but the inside is a clean and comfortable open space, packed with long, family-style tables. There were a number of families with kids and groups of college kids eating and drinking quietly. There was a good mix of classic rock and indie rock being played at a volume that allowed easy conversation.

The system was that you order food and beer at the bar. There were about 6 beers on tap that day, with the IPAs as the standouts in my opinion.

The food was simple, mostly pizza and sandwiches. My pizza was tasty and the other members of the club seemed to like their food. The wait staff was efficient and attentive. The prices were reasonable.

While the beers here were not the best we found in Austin during our pub crawl, this is a good stop for food and casual conversation with well-made beers.