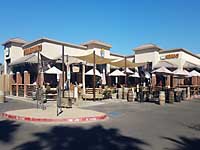 Rated by dafla67 from Pennsylvania

4.25/5  rDev -2.7%
vibe: 4 | quality: 4.25 | service: 4.5 | selection: 4 | food: 4.5
Pandemic Review: I did a curbside pick up yesterday and was very impressed. Sprawling building with large outdoor patios on two sides. (I never set foot inside) Pick-up table was outside at the edge of the patio, which had a fairly good number of occupied tables. Service was seamless and friendly. I had the Jalapeno popper sandwich which was very tasty. I also picked up a couple of crowlers, and have so far tried their Citrus Valley and it was excellent. I look forward to returning post covid ... the place just looks like fun.
Feb 19, 2021

Brewpub is spacious with indoor/outdoor seating

Selection of beer was ok..they had 7 beers on tap, with a few ipa's, a porter, berliner weisse, lager, witbeir and stout on tap

Quality of service was very good, our server was attentive and took care of us very well

Food here was fantastic as well..my wife and i shared the artichoke dip and some tacos all of which were great

Reviewed by mewanderinghome from Arizona

4.46/5  rDev +2.1%
vibe: 4 | quality: 4.75 | service: 4.5 | selection: 4.25 | food: 4.5
Definitely in the running for Arizona's best brewer, along with the much smaller Pueblo Vida in Tucson (and possibly Iron John's in Tucson, Dark Skies in Flagstaff, and Tombstone in...I'll let you figure it out ;) AZ Wilderness is easily my favorite of the many in metro Phoenix, and the best brewery grub in the state. Especially the must-order Drumsticks Confit. Their downtown phoenix location is even better, but whichever you're nearer make a pit stop for sure, and bring your appetite not just your thirst.
Nov 30, 2019

Reviewed by spoony from Colorado

4.3/5  rDev -1.6%
vibe: 4 | quality: 4.25 | service: 4.75 | selection: 4.25 | food: 3.75
V-AZ Wilderness is located about 20 minutes east of downtown Phoenix in Gilbert and it has an appropriately suburban feel. There is a pretty large patio surrounding the place on two sides with plenty of shade. The interior is large and the decor feels a bit like a brewpub from 10 years ago...not bad, just a little dated. I visited for lunch on a Monday and it was bustling but not crowded with lunch patrons at tables randomly and a few people sipping at the bar.

Q-I tried two beers (and had a big taste of a third beer from a keg that kicked with my order). I had three different styles and all were pretty good.

S-My bartender was very attentive and friendly. He made suggestions when I asked and responded to questions about the beer. His pours were done properly and glassware was style-specific. My food arrived quickly too.

Sel-AZ Wilderness had a pretty good spread of beers on tap when I visited. Styles ranged from sours to bruiser BA beers above 11% ABV to lighter beers like the saison I tried and a session IPA. I did not write it down, but I would estimate that there were 15 beers on tap and a smaller number available in cans for take-away.

F-I had lunch and was my tacos were merely OK. The ingredients tasted fresh but they were a little under seasoned and the plate was just kinda uninteresting.

O-I would definitely come back for the good beer and great service.

Reviewed by matcris from Arizona

Reviewed by Beer__Girl from Arizona

2.2/5  rDev -49.7%
vibe: 3 | quality: 2 | service: 2 | selection: 2 | food: 3
Been there twice now and service is passive and the food was burnt one time and stale the next. When I told the water of the burnt grilled cheese he said it didn't look right before he brought it out. Umm, so why did you try to get me to eat it? Then the manager came to table and came across like he was doing me a favor by taking it off the bill. I can understand the draw of the place. Great outdoor seating and mostly friendly staff....? I sampled all the beers and honestly can't tell the difference between most since they are all so over hoped it covers the body of the beers. I won't give up. I am going to try brunch here next week.
May 06, 2018
Rated: 4.61 by Chackman151 from Arizona

Reviewed by Keepnitrl from Washington

Reviewed by onedogtwodog from Texas

Reviewed by DrinkThemAll from California

Reviewed by AZBeerDude72 from Arizona

Rated by JackDempsy from Arizona

4.35/5  rDev -0.5%
vibe: 4.25 | quality: 4.5 | service: 4.25 | selection: 4.25 | food: 4.5
Stopped in for a late dinner and drinks after a day of hiking and road tripping. Staff was super friendly making sure we were well taken care of, asking how our trip was going, and making suggestions for other things to see in the state. Beer was awesome. I love the mix of traditional and adventurous approaches. Everything we tried was delicious. Food was also super tasty. There's a soft spot in my heart for any place with poutine on the menu. I don't know when I'll get the chance to return, but I would in a heartbeat.
Apr 11, 2017
Rated: 4 by mothman from Minnesota

Reviewed by boilermakerbrew from Indiana

3.51/5  rDev -19.7%
vibe: 2.5 | quality: 3.25 | service: 4 | selection: 3.75 | food: 3.5
Interesting place that I will evaluate two fold; beer, then food. As far as beer goes, they have a fair selection of their own taps in a wide variety of styles, from sours, to IPA's, to BA stouts. The IPA's are hazy, turbid, and usually average or there about. The sours that I had were not good, giving off flavors of latex. However, the stouts and BA versions were pretty solid, with my only comment being that the barrel flavors bordered on overpowering at times, but were decent overall.

For the food, the menu had a decent variety, with burgers dominating the menu, but plenty of other options as well. If you want to try an obscure combination of ingredients on a burger, they can probably do it. Service was good as well. The really odd thing about the entire place was the vibe/atmosphere. It has an outdoors theme throughout, which is done pretty well in the tasting room area. However when you get seated to eat, the vibe goes from outdoors to outdoors theme in a very dark, almost strip club like room. Other than that, the dining experience is average to slightly above.

Overall, not one of my favorite places, but it is worth checking out at least once. There is a ton of hype around this place, so the wait can get long at peak times. If you are near it, why not; if you're making a trip for it, don't.

Rated by Warlocks-Passage from California