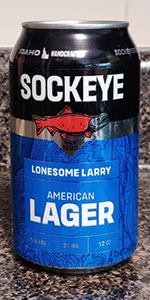 Notes: This Munich-style Helles is bright gold in color and features Idaho malts and Idaho grown hops. It has a subtle earthy aroma,typical of Idaho pilsner malt. This beer is a traditional European-style lager and has a well-rounded malt sweetness, balanced with a touch of bitterness on the finish.
View: More Beers | Place Reviews
Recent ratings and reviews.
Ratings by darktronica:

Rated by Nvrmind16 from California

3.44/5  rDev +1.5%
look: 3.75 | smell: 3.5 | taste: 3.25 | feel: 3.75 | overall: 3.5
easily the lightest i have seen of the sockeye beers so far, a simple lager thats about as pale in color as they come, lighter than yellow even, with a short head from the tap despite robust visible carbonation. aroma is clean, not much going on with the lager yeast, its hardly there at all, but the beer is really dry so it sort of does its job in silence. there is a crackery grain aspect to it, doesnt seem adjuncty to me at all, and there is a clean minerality about it as well, simple and elemental. the flavor starts well, not much going on, a light crispy grain element, nothing much to it, minerals again, trace grassiness too, but at the finish it comes a little doughy, like overly bready or something, and it lingers past where this should stop, almost gross but i attenuate to it quickly, it turns my stomach a little at first, but it fades as the beer warms oddly enough, and it resumes its minimalist vibe later on. carbonation is great, i wish the finish was more tidy, usually its sugar that ruins crispness, but not here, its something odd with the fermentation. not my favorite from these guys, not by a long shot...
Mar 31, 2019
Lonesome Larry from Sockeye Grill & Brewery
Beer rating: 3.39 out of 5 with 4 ratings