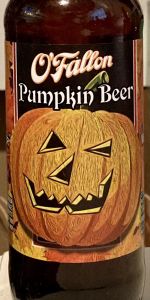 Notes: Like pumpkin pie in a bottle...we add 136 pounds of real pumpkin to the three-barley mash and then season the finished beer with cinnamon, nutmeg and cloves.

Nearly clear copper with a light tan head, the pumpkin and cinnamon are front and center on the nose.

The taste is accentuated by the addition of the clove to the cinnamon and the pumpkin. The description says this is pumpkin pie in a bottle, and that’s accurate. A really nice fall beer.

This has the best flavor profile of any pumpkin beer that I've had. Very well-balanced, not overloaded with spices like many of the others. The only problem with it is that it's a bit too thin in my opinion. I think I slightly prefer the Schlafly Pumpkin Ale just because of its more full-bodied mouthfeel, even if it doesn't nail the spice mix quite as well as the O'Fallon.

That said, this is still excellent if you like this style. I've been buying it every fall for the last 10 years. Sometimes I feel like having this one, sometimes the Schlafly.

Overall, a solid 4. I get excited for this one every year. If it had just a little more body, it would be an easy 4.5 and hold the crown for best pumpkin beer.

i really like pumpkin things. those stereotypes about 22 yr old white girls and starbucks is my life for about two months a year. so i was pretty excited when i dropped this into my glass. deep burnt orange body with a nice head that has left quite a bit of lacing all patched together and a nice ring still hangs out. pumpkin pie on the nose and tastebuds, pure and simple. great balance of pumpkin to spices and nothing is overpowering, just really tasty. unfortunately it's quite thin, a bit of body would be fantastic but still delicious.

Like how this looks and smells-brown/orange with a lot of particulates, strong pumpkin scents. Pretty good flavor, plenty of pumpkin with a mild spice presence. Only complaint is it's a little thin.

Smooth delicious pumpkin beer. I really enjoy this on crisp autumn evenings. The smell reminds me of pumpkin pie on thanksgiving. It pours a reddish coppery tone with thin, quickly dissipating head.

Pours a beautiful color from the bottle. Wonderful smell. The scent reminds me of Fall right away. The taste is almost sweet at first, very original compared to the other pumpkin styles. A little sweet for me after 2-3. Still very good.

3.5 A: Well hazed orange brown color. Two fingers of frothy off-white head with average retentions and a short ring of lacing is left.

3.5 S: The nose is mainly pumpkin and spice. The base appears to be fairly bland and is just a vehicle for pumpkin goodness. That said there's a touch of caramel amidst neutral malt. The pumpkin, however, is done well and offers strength. Spices include cinnamon, clove, and nutmeg.

3.5 T: Taste is simply more of the nose. Pleasantly pumpkin with spices mentioned above. Not a whole lot else going on. The base is bready but neutral overall with just a hint of caramel.

3.25 D: Not super impressive, but at least the pumpkin is done the right way. I wish the base beer would be a bit more interesting and would contribute more, but in any case, I'm not unhappy putting this one back.

Mostly clear orange/tan body, off-white head that fades entirely. Nose hits first with baking spices, in a restrained amount, followed closely by a sweet malt, caramel and biscuit-like, reminiscent of a marzenbier. Flavor subdues the spice in favor of the sweet malt, and a kind of pumpkin-essence element. Spices are mild, cinnamon and nutmeg, a bit of unwanted clove/bubblegum. Body is highly drinkable; appropriate carbonation, medium weight, maybe a bit slick.
I know pumpkin beers are allowed to be sweet, but that odd malt sweetness is not for me. I still appreciated the likeness to traditional autumn beers (Octoberfests), and also the restrained spices (too little is better than too much), so this ended up being a decent cooling-weather beer.

Lots of cinnamon and clove on the nose of this one. Pumpkin is present but balanced. Smooth easy drinker. One of the better pumpkin ales out there - spices are nicely crafted bad pumpkin is balanced.

This is an orange-amber color with a light haze and a white head. The head is thin. The aroma is great...pumpkin pie spice and malt. The taste is quite good as well....malt, spice, it's not unlike pie filling, but not cloying. Full in body, but not heavy. Good.

Poured from a 12 OZ bottle into a pint glass. The appearance is a murky orange with a small white head. The aroma matches a pumpkin pie! The taste is pure pumpkin and spice goodness. One of the best pumpkin ales I have had.

Just a "meh" pumpkin ale. They do a good thing by not going crazy with the pie spice. This beer is more of the pumpkin and less of the pie. Not really a dessert beer like Pumking by Southern Tier (which I like when I'm wanting sweet). Schlafly's is stilll the best all-around pumpkin ale out there---my benchmark.

Pours a murky amber color with a solid finger’s worth of heterogeneous off-white foam. Mild aroma smells of cinnamon, nutmeg, allspice, pumpkin, some wheat, and a generic macrobrew scent.

The taste features wheat and cinnamon most prominently, with a dilute pumpkin flavor that is largely masked by spices and carbonation. A gentle dose of noble hops lend a mild bitterness that doesn’t quite mesh with the other flavors. A little warming reveals a vague juiciness along with the pumpkin. Medium-light body and aggressive carbonation produce a cola-like mouthfeel that is probably the most assertive aspect of this brew.

Overall, this is a dilute and barely passable representation of the style. There is pumpkin, and there are spices, but their execution is hardly inspired. It’s not offensive like some pumpkin ales, but there are far better to be had.

12oz, no date. Aroma is mildly of spice and pumpkin. Taste is mostly of malt, some spice, and a little pumpkin. Mouth-feel is light.

I drank this O'Fallon Pumpkin Beer (5.6%) side-by-side with a Schlafly Pumpkin Ale (8%), and the Schlafly was more creamy, and more complex. The O'Fallon was two-dimensional--like a decent ale, with a little spice--but still drinkable.

Pumpkin Beer - O'Fallon Brewery. Poured from the bottle into a pint glass, this beer's head is two fingers thick, with not much lacing, and a reddish amber body.

I smell real pumpkins, not a can of Libby's.

Well damn, I thought the floaties were slightly off-putting, but I realize its small chunks of pumpkin. Now this is a true blue pumpkin taste going on, not a spice bomb by any means.

The mouthfeel is clean and crisp.

Started out with a great pumpkin taste but soon the bitterness over powered that, looks cloudy and has that fall/pumpkin smell, would probably try again

Poured from a 12 ounce bottle into a Lost Abbey Teku glass.
4.25/4.5/3.5/3.25/4
Glowing gold, with a billowing two fingers of head and mild effervescence.
It smells delightful -- plenty of spice without that being overwhelming. Vegetal, gourdy scents.
At first, the taste is promising...it doesn't taste artificial at all (and never does), and is bursting with fruit (vegetable? what is pumpkin) and complemented by mild cinnamon and clove. Alas, it has no staying power, and scant seconds later, a thinness and lagery-yeastiness has taken over, the pumpkin all but forgotten. The spice has some staying power though, and so the aftertaste leans pie-like, marred by the thin-light-beeriness. A bit like Miller with pumpkins.
As pumpkin beers go, pretty good! Would drink another.

A- Pours orange with a finger of white quickly dying head.

S- It's a pumpkin beer all right. Some spice, a good amount of sweetness- honey, ginger, a little Mandarin orange.

T- Matches up closely to the aroma. Good amount of pumpkin flavor and some brighter pumpkin pie spices. Not a lot of clove or allspice or anything too dark or heavy. Some malt flavors like a pancake or doughy biscuit as well.

F- Mostly some lingering stickness on the tongue and lips.

O- A solid pumpkin with distinct if not unique flavor. Bravo to the season!

Poured from 12 oz bottle into snifter.

A: Pours golden brown with one finger white head that settles to a thin ring. Minimal lacing.

S: Cinnamon, all spice, and honey.

T: Straight up pumpkin pie. Cinnamon, all spice, nutmeg mixed with some subtle sweetness. Spices are a touch assertive.

O: One of the better non-stout pumpkin beers I've tried.

Had this just after Schlafly pumpkin ale. I think I'd have liked O'Fallon's more if I hadn't just had the Schlafly. O'Fallon's is lighter in every respect. This makes it better with a meal (went with curried fish just fine), but I prefer the stronger, richer, sweeter, center-of-attention Schlafly. This very likely has more to do with personal preference rather than quality of the brew. Finding that for the most part I like thick, dark, sweet stouts. This might have been a good summer beer, when I was looking for something a little lighter without being thin or watery.

The brew itself looks quite nice upon pouring with a luminous copper color but the white head dissipates quickly. It smells of pumpkin, clove and sweet candy. The taste is balanced with a nice spicy bite midway, leaving way to pumpkin pie. Nearly perfect. I find most pumpkin beers overdo it on the cinnamon and nutmeg, leaving a harsh aftertaste that leaves me shuddering. I think a good pumpkin ale should taste like, well, pumpkin. A great session beer, I am impressed with the balance here.

Thanks, joshstl! Not a great look here - the head looks fizzy and has terrible duration, plus the copper-colored body is murky. As far as the aroma goes, I do get some pumpkin spicing (cinnamon and nutmeg) that doesn't seem harsh or oppressive. Problem is, there really isn't a whole lot to the nose beyond that and some caramel malt. I'm surprised how well the flavor profile mimics pumpkin pie. Yes, I do get some nutmeg, cinnamon, and clove; but I also pick up flavors of vanilla cream and caramel on the back end. The cinnamon isn't overdone (though nutmeg is quite bold), and it doesn't finish harshly. It doesn't have the most exciting or vibrant feel; drinkability is good regardless. I don't always enjoy this style, but this is pulled off well.

As for pumpkin beers . . . I did not enjoy this one. Just had a very watered down pumpkin flavor with no other spices or flavors to complement or support.