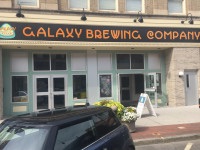 Entertained some friends for lunch, food portions were small (we left hungry) and beer (4 different craft drafts) were mediocre at best. Bill was $99 they added 20% gratuity, which is fine but they did not mention it and I added additional $30 which was unwarranted, would not respond to request for refund of additional. Better places near by and I will not return.

Great place with a great theme. The bartender was the worst bartender I've ever encountered. Gave me a lot of attitude when I asked a question about their beer. She was very rude and ruined my experience. I liked their beer list but, I would not recommend them just because the bartender was a bitch to me. She had glasses and black hair with purple highlights be wary of this one.

I stopped in here after having a beer at the Water Street Brewery. This place seemed a bit younger and livelier. There were 12 beers on draft. Staff was friendly enough, prices varied by beer, I didn't try any food.Overall is pretty good spot for a beer.

neat spot right in the heart of binghamton. its minimal inside, not much decor and a pretty expansive space, with a long bar area in front and a full restaurant setup in the back. crowd was a little thin on a thursday night, but the bar was full of what appeared to be local loyalists. it has an almost diner feel to it, maybe a little more upscale than that, but very come as you are and casual. they had a nice range of beers on tap, well over ten, covering a big range of styles. i didnt care at all for the fresh hop ipa, but the imperial stout and the kolsch were both solid. they had a very experimental beers on too, one featuring black limes that was excellent. it seems just a bit amateur or homebrewy on the misses, but their better beers are great. we had chicken wings to eat, and both flavors were really well done, very homemade, and perfectly cooked. the bartender was friendly and handled table service for us in that area very professionally and attentively. the rest of the food menu looked great too. this is a nice little meeting spot for a couple of beers. i would go back for the food and the service, but the beers were a little all over the map. perhaps a little more time in the business and these will be cleaned up. worth a stop though for sure!

Stopped here, thought it was a pretty nice spot. The service was good, the one girl messed up one of my beers and had no issue exchanging it for the right one. The selection was pretty good. It's not a bad place in my opinion.

Expansive barroom with long bar that seats at least 25. Dining room in back. Big-screen beer menu with a dozen solid beers on tap. (Really enjoyed the Andromeda IPA) Very knowledgeable and personable staff. Did not try the food.

Vibe: Cool place, but a bit sterile. Not much character.

Beer: Clean & not faulty, but not that memorable either. The semi-hyped IPA was pretty meh - not very Hoppy or anything to set it apart. Porter was a 1 trick pony with all roast, session IPA had no taste whatsoever. Whiskey Saison was interesting for a few sips but then became a chore to drink. Best of the lot was an ESB, which was a nice drinker.

Food: Had a tasty burger that was cooked to the requested medium rare. Nice handcut fries came with it. Nice meal overall.

Service: Female bartender was friendly but a bit slow. An older gentleman who I assumed was the owner wanted to start a discussion about the evils of big beer (ABI/MC) on smaller beer. He became somewhat angry when I wouldn't agree with him. He went away after I ignored him, but I was a bit annoyed at the interaction.

All in all, a decent place to visit if you're in downtown B-ton.

Full disclosure, I walked in on a day where the staffing wasn't quite right - but still, ordered a sampler and it took the bartender over 40 minutes to pour. That should never happen.

By the time I got them, the beers were actually pretty good. Of the lengthy list, only 6 were on tap and I didn't have the heart to wait for the 2 I didn't sample. Hopefully this was an aberration.

The food was decent, good sized menu. This is a place that could work, but needs to seriously get its act together. The beer's good though, and that's what matters most.

Long bar with a large amount of taps (10 I think)

Lots of seating in the dining area with very friendly bartenders and wait staff.

Professional chef adds to the food here with his own touches and his refusal to add ranch dressing to the menu. Food was reasonably priced and very fresh.

Multiple tvs and a large amount of space allow for a great atmosphere with the right group of people in the place. Would stop again!