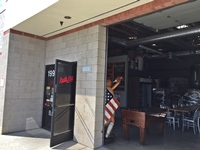 Pacific Plate Brewing Company in Monrovia, CA is a great nano brewery with some very exotic beers. They are located in an industrial park on the south side of the city right on Myrtle Ave. Parking is pretty simple as the business park has plenty of spaces to offer.

The tap room is completely hand built by the owners/brewers themselves who are 3 really down to earth and friendly guys. There is a cool little seating area with hand built benches and a couch and the place gets pretty busy on the weekends.

One of their beer lines focuses on infusing Latin American flavors into beer. They make a Mango IPA with tons of fresh mango that they peel and puree themselves. They also have a Horchata Stout which is an English Milk Stout brewed with cocoa, cinnamon, and vanilla.

Worth visiting just to try the unique beers!

These guys are awesome. Pacific Plate is our go to brewery in the Pasadena area. Very casual.

As a taproom, not a whole lot of atmosphere. If in from out of town...keep your expectations realistic. But there is excellent Brewing going on here.

Pacific Plate Brewing is located in an industrial area of Monrovia south of the 210 Freeway.

Once you enter, you have the tap area where you purchase your beers, and then some booths and tables with a large screen TV. It's not a big space. I ordered by flight of tasters. I enjoyed my coffee stout the most. Nice, friendly service.

Cool place to visit in this area.

The most important thing you can say about a brewery is that they have good beer; this place has good beer. Really, i have enjoyed every single beer that i have had from them. Their beer is crafted well, and they have uniquely crafted beer. My personal favorites are the horchata stout and mango IPA.

Not a lot of beers with teeth, small selection. O.K. spot but, a little small

Places has to be the smallest micro brewery in California. Try their Widowmaker IPA

Pacific Plate is a really cool, down to earth place. Great beer, made in small batches, super fresh. This place is in an industrial park so its kinda hard to find but once you know about it you want to keep it as your own little secret! I hate Hoity Toity places and this is low-key, classic rock playing from a small speaker, every-man's kind of place.

Really some of the most unique beers I've ever tasted along side near perfect re-creations of classic beer styles. I highly recommend bringing your own food or having some ordered, like pizza, if you go during the week or early afternoons as they only have food available Friday and Saturday nights.

My favorite was the Horchata Stout, German Kolsch, and San Gabriel Spring Ale. Three VERY different beers and each can certainly hold their own. Prices are reasonable seeing as how they are a 1 barrel brew house, and they sell 1 L growlers, T-Shirts, Glass, etc.

One of the tables was a little wobbly but I think that kinda comes with the territory of a small business. Great Job! Keep 'em coming!

Visited Pacific Plate a few weeks back. The atmosphere is like so many upstart breweries, in a small industial/commerial slot. Front space is well decorated with chalk boards of the availalbe beers, and a small counter, etc. Limited seating, but did not have a hard time at all finding a spot to rest the taster tray. Friendly group also invited us to join them which was cool for the atmosphere.

Did a full flight of their beers. Decent diversity in style range, the mango IPA, Horchata stout, a Hazelnut Brown, etc. However, the beers, imho, were not yet what I would say is "dialed in" Could be a scale thing, going from homebrewing to full scale commercial brewing takes time, and this is certainly nano scale, I don't even think they are on a 7 barrel system, as I didn't see any large conical fermentors. I will certainly give them another shot after a few months, since these guys have a lot of heart, and some good concepts.

Service was excellent. Very friendly, attentive, and then even followed up afterwards if we needing anything, or wanted a growler fills.

Coming off the 210, these guys are very easy to get to from the freeway, about a block in a half from the on/off ramp. I travel the freeway often on treks to the Bruery to pick up allocations, so I will stop in again to check them out, and see what's brewing.

Pacific Plate Brewing Company in Monrovia, CA
Brewery rating: 3.9 out of 5 with 73 ratings