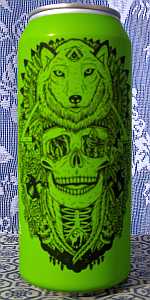 I have never had a beer that presents fresh lime quite like this. It is pretty unique. A little strange for the senses as the nose is heavy ginger but the flavor is heavy lime and that is what brings this down

Pours a turbid, pale yellow colour, generating 1/4 of an inch of loose, bubbly white froth that fizzles itself right out of existence within a minute's time. A thin collar sticks around for a little while longer, but eventually the surface is left barren, with no cap or lacing. Not the most attractive glass of beer I've ever seen, but hey, sometimes that comes with the territory - and besides, the aroma makes up for whatever it may lack visually. Ginger root is the most prominent feature on display, accented subtly by hints of lime zest, lactic acidity and wheaty pale malt sweetness. Kinda reminds me of my favourite non-alcoholic ginger beer; good stuff so far.

This is a very solid sour spiced beer, with its ingredients playing off one another to superb effect. The lime, in particular, provides a pleasant, juicy citrus note that gets the sip started off, but also helps to blunt the lactic acid sharpness (which might otherwise dominate, as it often does in unflavoured 'base' BWs). The wheaty pale malts do manage to provide a little bit of grainy background sweetness, but it's the adjuncts that take over towards the end of the sip - that's where the ginger spice really starts to assert itself, lasting through to a sour lemon-lime finish with briefly lingering candied ginger notes. Light-ish in body, with lively carbonation that prickles the palate continuously, resulting in a crisp, refreshing texture that is well-suited for this brew's sour lime/spicy ginger duo.

Final Grade: 4.16, an A-. Berliner Lime & Ginger is one of the most easy-drinking, enjoyable Berliners I've tried to date. Despite being a fairly low abv style, I often find BWs to be too tart and palate-exhausting to be viable session options... but this one solves that problem brilliantly, as the lime gives the flavour profile a fruitier, far less sharp tone, whilst the ginger provides a spicy kick that really hits the spot. I'm an admitted cheapskate, but I'll keep paying $4 a can for the rest of the summer, because this is just that good.

473ml can - the ingredient list on the label does not contain limes. Are there hops that can do that, like with orange, grapefruit, and lemon esters?

This beer pours a hazy, pale golden straw colour, with three fingers of puffy, finely foamy, and fizzy eggshell white head, which leaves very little in the way of lace anywhere near the glass as it quickly evaporates.

The carbonation is fairly active in its palate-pinging frothiness, the body a so-so medium weight, and sort of smooth, with a bit of lime acridity and ginger heat making problems for the locals here. It finishes trending dry, for the same reasons just mentioned.

Overall - I'm guessing that the lack of mention of lime was simply an oversight, as there is plenty of that flavour spread throughout this offering. This is a crisp and refreshing tipple, one which pairs well with another sunny July afternoon in good ol' Wide Rose Country.

Appearance - Very pale mildly hazy golden color with two fingers of thin white head that burns off quickly. No lacing to speak of, but an attractive brew nonetheless. Head fizzles off to nothingness inside three minutes.

Smell - Tons of ginger and mixed in with lots of lime. Those two dominate (as expected given the label) with a grainy backbone. Not alot else, but the ginger and lime really, really enhance each other.

Taste - Tart, super refreshing on a hot summer day, the lime kicks things off and is only made more robust by the ginger. Again there's wheat there in the background to give some substance but the two signature flavors dominate from start to finish and make a really fresh and refreshing tasting brew. This comes from a guy who generally doesn't consider this a favorite style.

Mouthfeel - Light, crisp, carbonation is tingly, body is easy to quaff and finish is spritzy and dry. Great thirst quencher.

Overall - A masterpiece within the style and simply one of the best new beers I've tried in 2018. Very much worth the price.

Lots of soft foam out of the can with a bit of a gush. Chunk soft towers of white foam, that does settle down nicely, into a good pencilled collar. Nearly straw colored body, with a touch of opaque lemon haze. Good amounts of visible carbonation.

Aroma touches a little bit of lactic souring acid, and a mix of ginger that it comes off smelling more like Canada Dry Gingerale. Lots of Roses Lime cordial like touches on this also, with very little malt or yeast character.

Palate makes some better inroads. Light bodied, with a touch of seltzery club soda quality flavors. Rocky and mineral with lime sourness mixing in with a faint touch of wheat and light malt. Flirts with a little bit of bakery bread but doesn't quite get there. Refreshing, almost crispy and tangy but with a surprising amount of lengthy flavors and depth.

Moderate pour yields a one inch white head over an ever so slightly hazy, not quite bright, body with no lacing. Nose of wheat, lime, and ginger with some kind of floral thing going on as well. Taste mirrors nose with a tart middle finishing with ginger spice. Nice feel and overall, a refreshing Berliner right here. Thanks and cheers to our friends up north!

Appearance: Produced a finger and a half of head that did not lace but did stick around for a decent period of time. The body is a a clear yellow that doesn't show off much carbonation.

Smell: As advertised, as abundant lime to a backdrop of ginger. Not exactly complex, but didn't really expect it. Potency is in high gear from the get go. Warming not needed.

Taste: Once again, as advertised as it starts with a strong our lime with a ginger snap. There's not a lot more to say then that. It's done well, but a bouquet of beer with a swath of range it is not.

Mouthfeel: For something this sour, it does a great job of keeping the aftertaste in check. The carbonation is good, but because the beer doesn't have a lot of range, transitioning isn't really something that can be commented on. I do like how the ginger adds a slight dry touch to the aftertaste.

Drinkability: Refreshing and easy to drink, light bodied and crisp. It's sour but well reigned in and just works. Really my only issue is that it isn't very beer like. Still, it went down right quick.

Final Thoughts: A great summer drinker, but that's really the only time this stuff would be appropriate, which is a bit of the shame. The lime over rides the ginger and the two override the beer. Certainly a great offering, and one of the better sour's I've had.

16oz. can into a Night Shift stemware. Shared with schen9303.

Nose is fresh. Lime and ginger are very apparent with hints of yeast and citrus zest. Tasty. Beer opens tart. Lime, ginger and lemon starburst. Spritzy with a slowly building pucker. Foamy at the finish. Body is light with ample carbonation. Prickly and lively on the palate and goes down dry and filmy. A little too carbonated for my taste.

Decent. The ginger is a little strange for me but the lime profile is spot on here.

Defiantly not my style of beer. The smell and taste are not for me.

Taste - Starts off with a pungent zing from the lime and then goes into the ginger. Then the flavour goes to very tart and salty (but pleasant). The spicy hops and hint of funky yeast finish the brew off.

Mouthfeel - Medium bodied with moderate to high carbonation. Finishes sticky with the tartness and saltiness lingering.

Overall - A bold and zingy brew that displays the lime and ginger very well. It almost reminds me of having a ginger beer but yet again, the folks at Collective Arts seem to stretch the boundaries and deliver another solid brew.

Pale straw colour verging on honey gold, hazy, airy and thick white head with good retention.
Lime and ginger all the way - immediate sense of ginger beer, sweet with that spicy kick.
Taste is plenty tart, clearly of lime, with a dash of salt that brings to mind a margarita; only a whisper of ginger, might have missed it if not for the aroma; puckeringly dry mouthfeel, you're not gulping this down, but it's super refreshing on a hot dry day and a welcome change from the lager or IPA you're drinking; medium body and carbonation, soft on palate, very easy drinking but not watery.

It's one dimensional, but it's a great dimension. Try with tacos/Mexican, Indian food.