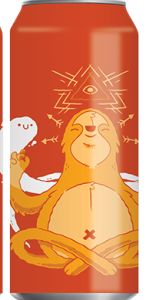 Smell is slightly tart with notes of peach, tea, nectarine and honey.

Taste is peachy and slightly tart, with notes of peach skin, nectarine and green tea, with a mild bitterness.

Overall, a nice... IPA, I guess, even though it drinks like a cross between a pale ale and sour with peaches.

L: Poured from a tallboy can to a pint glass. Had a yellowish-brown color and a thick, viscous consistency. Lots of floaties. There was a thin, foamy head that quickly dissipated. Not whole lot of lacing.

T: Tasted of a little bit of malt (mostly in the finish), some citrus fruit notes (lemon, in particular), lots of peaches (a strong element), moderate hops, and a little tropical fruit (mango). This is a sweet and effervescent flavor. They seem to have put a ton of peaches in it, which dominates the taste, but it's still pretty tasty.

F: A well-carbonated beer with a lively finish. Light- to medium-bodied.

O: A solidly made, easy to drink IPA. Worth a try.

This is probably my new favorite NE IPA. Hits all my marks. Looks great - Hazy creamy view. Smells like citrus peaches hops. Tastes like it smells - fruity and juicy. Mouthfeel is full and juicy. Not sure why ratings are so low - I think this beer rates higher than current ratings indicate.

A-Hazy yellow with little to no head
S-Sour and acidic aroma with muted citrus mixed in
M-Nice medium mouthfeel with medium carbonation
T-Acidic base, so more of a sour than an ipa
O-I enjoyed this but somewhat of a false advertisement as an IPA... try it

473 mL can from the LCBO; dated Aug 24 2018 and served slightly chilled. This is the last of several cans that I bought in early September.

Pours turbid and hazy, with a golden apricot-hued body that is initially graced with one finger of soapy white head. It lasts for the better part of five minutes, steadily receding down to a smooth, creamy cap surrounded by a wide collar of foam. Can't say it's not attractive. Its aroma is largely fruit-dominated, as one might reasonably expect - I'm getting peach juice, grapefruit and cantaloupe, with lesser hints of lime and OJ. That does read as rather appetizing, but honestly it's all a bit too subdued and diluted to really get me excited for the first sip.

No. 6 is a decent IPA, though the peach is a bit of a tastebud hog, for lack of a better term. Normally I'd be fine with that, but it's not just the ripe flesh (or even the underripe tartness) that comes through here. I do get some of that sweet, ripe fruit and juiciness, but there's also a lot of pit, which distracts from what would otherwise be a perfectly acceptable finish of pithy red grapefruit and lightly floral, resiny hop bitterness. Peach juice and pit linger briefly into the aftertaste, the latter lending a touch of astringency. Medium in body, with light carbonation levels that provide some much-needed zip to this brew's smooth, thick, juicy texture. Pretty easy to drink; the 6.7% is totally masked.

Final Grade: 3.81, a respectable B+. As I finished off what was most likely my last glass of IPA No. 6, the main thought rattling around in my skull was that it just wasn't as good as the other numbered Collective Arts IPAs - a common opinion, it seems. That's not to say I disliked the beer... in fact I enjoyed my can(s), more or less, which is why I've still given it a solid grade. Worth a tick at least, but in the near term you'd be saving money (and getting a better beer) if you just stuck with their mainline IPAs, like Life in the Clouds or Ransack.

Hasitantly doing this. First review, and I am very open minded and like beer. Clearly I received a bad batch. 4-pack cans. Poured into pint glass approx 6oz.....afterwards Syrup/batter came out of the second pour. Threw away first can, and repeat on second. 2 cans remain. Will try again as this is a known and respected brewer...in my opinion.

Can: Poured a hazy yellow color ale with a medium size white foamy head with light retention and minimal lacing. Aroma of tart peach notes with some tropical and citrus hops notes. Taste is a mix of light tart peach notes with some citrus hops undertones and some subtle tropical hops notes. Body is pretty full with good carbonation. Interesting but was expecting less tart notes.

Poured into a becher pint glass.
The appearance was a nice looking semi-thick pale orange color with a small sheet of a foamy white head. Dissipated finely to leave a film filing out in a semi-spreading manner.
The aroma had a wonderful blend of semi-sweet peachy flesh playing nicely with the hops which add in a touch of lemon-sweet to semi-grassy then a touch of perfume and underscored by a whiff of floral sweetness.
The flavor leans towards a nice bracing semi-sweet brisk orange juicy ripe character pulling in the lemon, perfumey, floral and grassy tastes coming together very nicely. Mild aftertaste of orange, floral and lemon qualities.
The mouthfeel was about medium bodied with a fair sessionability about it. Carbonation seemed pretty even. ABV felt as promised by the brewer. Finishes with a kind even keeled layered peachiness, sweet, subtly tart and grassy.
Overall, pretty nicely done AIPA coming close to the New England styled IPA but falling just a touch short. Still, it's one I'd come back to.

This beer has a strong mandarin smell and initial taste, with a hint of hops. It would make a good session ipa.

It is quite peachy and it works well. A good drinker, but not as great as some of their other IPAs.

Tasted in a Spiegelau IPA glass from a one pint can on September 30, 2018. Brewed with Amarillo and Wai-iti hops and fresh peaches picked at their peak. Juicy peach with lemon and melon notes.

Taste - Strong peach and nectarine upfront. The hint of apricot comes through as well. The bready wheat malts follow suit but the hops are lost in translation from the dominance of the peach, nectarine, and apricot. The earthy yeast finishes the brew off.

Overall - A so-so IPA that is too heavy on the fruit aspect and not enough emphasis on the hops. I had high expectations from this one but it didn't quite live up to them. If this were a fruit beer, it would be rated quite high, but nonetheless, what we have is an average IPA. Looking forward to the next brew in the series.

L: Opaque, murky orange with a foamy white head. There's actual chunks of peaches in this. Wtf? It looks like actual orange juice because there's literally pulp in this.

T: Intense amounts of peach from start to finish. Sweet, ripe, and juicy. There's some apricot, orange juice, orange peel and grapefruit zest as well. It's mostly peach juice and orange juice and barely any beer taste. Just a hint of grassy hops and some vague NEIPA yeast.

O: What even is this? It's no IPA. I would say it's an imperial peach shandy, but even shandies taste somewhat like beer. This is alcohol peach juice. It taste good, but, wow.

Collective Project: IPA No. 6 from Collective Arts Brewing
Beer rating: 83 out of 100 with 61 ratings