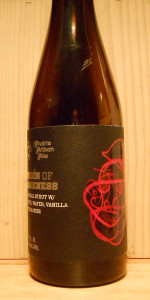 The smell is very nice. Dark chocolate leads the way, with hints of cinammon, coffee, brown sugar, and a bit of 'nilla wafer. I don't pick up any barrel characteristics in the nose. That touch of cinnamon really ties everything together, great smelling brew.

The cacao and coffee are the forward flavors I can taste. Almost has a bit of a chocolate chip cookie thing going on with notes of brown sugar and molasses. Like the smell, I can't really taste any oak or bourbon. I'm thinking that this isn't actually barrel-aged. The other releases in this series say bourbon-barrel aged on the label while this collaboration just says "imperial stout w/...". In fact, it's the only label in the series that doesn't say "bourbon barrel aged...". However, the lack of bourbon does not detract from the taste. This is a fine tasting imperial stout.

This is really easy drinking and crushable for an 11.9% stout. Well-carbonated, not overly boozy. Oily finish, medium-bodied.

I'm really digging these 2019 collabs compared to the previous year's. I was hesitant to buy this and the Voodoo collab based on the ones I had from 2018, but they've seemed to up their game. Overall, this is a delicious stout and a great addition to the Origin of Darkness series. It's not as good as the collab with Voodoo, but it holds it's own. The wafer adjunct is pretty interesting and adds a bit of dimension as opposed to just vanilla. Would love to try some of these on draft.

Split 500ML with bottle my wife. Hoping for Prairie magic.

Black. The nose is mainly chocolate. I love chocolate. But I want more, dammit.

Origin of Darkness – Prairie has more layers than a wasp nest. Chocolate on top, & second, vanilla, with a weird layer of Keebler sugar wafers that I’d never I.D. without a hint (i.e. the labe). Coffee? Nein. Elves? Doubtful. The barrel shows as more oaky, & probably rested on a dirt floor before use, as there’s an earthiness that’s reminiscent of rye. Smooth & slick, which is the Prairie influence, with no hint of the double digit ABV. The smoothness really assists in the liquid slipping easily into the orifices.

I sense the lovely stench of Prairie all over this beer, but it doesn’t quite reach the upper echelons. Interesting barrel usage & a very good beer.

Poured from a 500ml bottle. Bottled on Oct.18/2019
Teromous review hit it really, i guess i am lazy writing up some beers.
Gave it higher marks though. A nice Imperial Stout for sure.

Appearance: The body is black and it takes a while before a slowly formed short khaki head appears. It slowly recedes after forming into a ring leaving some pretty nice spots of lacing.

Aroma: The beer smells very boozy before even getting close to the glass. Closer inspection gives way to an interesting rum raisin aroma with a slightly nutty aroma that kind-of straddles the line between almonds and walnuts. Closer to the beer it doesn't smell boozy at all. It delivers a lot in the aroma department.

Taste: Up front there is brown sugar and cocoa powder flavor, then there is a bit of earthy ancho chili pepper-like flavor with this slightly herbal quality and no heat. It finishes with some chocolate and coffee flavor. The aftertaste is a bit sweet like powdered sugar. There is also this slightly metallic flavor that floats around while drinking the beer.

Mouthfeel: For a beer of this high of an ABV ("11.9% ALC./VOL." as indicated by the label) it is very easy to drink and has very little heat. It is full bodied but lacks some texture, which could also be from the high ABV.

Overall: The label states that this is an "IMPERIAL STOUT W/ COFFEE, WAFER, VANILLA & COCOA NIBS." Not knowing what the wafer is, the beer pretty much hits all of those marks, lacking only in the vanilla which didn't seem to show up on its own. There were some other flavor and aroma characteristics that were not listed on the label, so percievably the beer has a good deal to offer aside from what is advertised. It's possible that the pepper flavor could have been a combination of the coffee and cocoa earthiness. It is worth taking a look at, especially if you're interested in seeing something that Prairie and Collective Arts can make together. I would drink it again but I don't know that I would buy another bottle given some of the better alternatives from both breweries.

Delicious! Dirty-motor-oil black with a foamy, chocolate-colored head that fades quick with little lace. Nice aromas of dark, dried fruit. Taste is great with some chocolate, coffee and toffee coming through. Viscous but not overly so. Overall, an awesome high-end stout.
-

Collective Arts/Prairie 'Origin of Darkness' @ 11.9% , served from a 500 ml bottle
A-pour is a dark cola brown from the bottle to a black in the glass with a dissipating small tan head leaving a spotty lace ring along the tulip
S-coffee , chocolate , cocoa nibs , hints of vanilla
T-coffee & chocolate Imperial stout
MF-ok carbonation , feels full bodied
Ov-taste like a boozy coffee crisp
prost LampertLand

Pretty black with minimal highlights. Some sticky, light caramel colored crown. Slight lacing as well.
The nose is huge on coffee with underlying background notes of chocolate and vanilla wafers.
The taste delivers on the chocolate more with the coffee turning into more of an accent.
The feel is a bit thin, but sticky. 12% ABV leaves some warmness behind in the chest.
Overall, it’s solid but just not a wow factor.

500 ml bottle.
Bottled 18 OCT 2019.
Moderate pour yields an almost two inch, beautiful tan head over a pitch black body with sticky lacing. Nose of roasted malt, coffee, cocoa, vanilla, and slight wafer. Taste mirrors nose rather closely with coffee and cocoa at the forefront. After warming, the flavors of vanilla and wafer come out from hiding. Nice feel and overall, a very worthy collab with Prairie Artisan Ales. Make love not bombs?!? Cheers to PAA for leaving their peppers at home!!!

Origin of Darkness - Prairie from Collective Arts Brewing
Beer rating: 92 out of 100 with 24 ratings