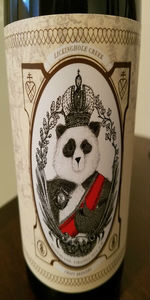 Pours near black and opaque, with a one and a half inch foamy head with good retention and lots of foamy lacing. Aromas of vanilla, light roast malt, chocolate, caramel, oak, toffee, some fudge, light bourbon. The flavor is similar- malt, vanilla, chocolate, oak, caramel, cocoa, some toffee and caramel, some bourbon. It’s fairly bitter. Smooth, a good full body, well carbonated.

While the great aroma teases your expectations, the flavor does not fully deliver them. There’s just something lacking. Let this really warm, it seems to mellow the bitterness a bit. The vanilla is the obvious and worthy star, but the bourbon is a little light- too light. Worth a purchase.

The beer pours a good looking creamy brown head that dissipates at a moderate pace. The beer itself is a dark chocolate black that looks nice.

The smell is a good deep bitter dark chocolate with moderate wood notes around the edges. Interestingly enough, there isn't much bourbon other than a sharp alcohol smell. The vanilla adds a good bitter-sweetness that seems to be covering up the bourbon.

The taste is very similar to the smell but seems to have a strong vanilla note with the wood and chocolate lingering in the finish.

The feel is good. It's slightly creamy but the carbonation creates some nice fluffy texture.

Overall, a good beer with getting even if it is extremely bitter.

A - Poured into a Kate the Great tulip a nice dark black hue with a good two finger mocha head that fades to leave creamy blanket and a nice lacing.

T - Taste is similar to the nose, very nice vanilla, almost too much. Nice chocolate and rich barrel notes, really nice though there is a bitter hop on the finish that clashes.

O - Overall this was a very solid beer, however, the hops really kill the finish. That bitterness ruins the barrel and additives. Really really unfortunate.

L: pours lighter / thinner black with two fingers of tan head. Pitch black in the glass the glass
S: slight barrel, with a nice chocolate and vanilla mix.
T: starts with some chocolate, then turns to the hops and molasses body with a vanilla finish. The barrel is there throughout but only slightly.
F: medium/thin thickness, slick feel and goes down easy.

750ml bottle. 2016 release. Served in a snifter glass. Dark brown body, one finger white head, fair retention, no lacing. Smell is intensely hoppy, pine resin with milk chocolate and dark fruit. Touch of vanilla, but not very much of it. It's very hoppy. Flavour follows; hoppy pine resin mixes in with milk chocolate, dark fruit, touch of barrel. Again, not much vanilla. Mouthfeel is thinner bodied, a little undercarbonated, nothing too special here. The hops linger from the front all the way to the backend. Too hoppy, not enough chocolate, roast or vanilla to go along with it. A messy over-hopped stout.

Pours an extremely dark brown color. It's not quite pitch black, but it's close. The head is amazing - two fingers high, tan in shade, and amazingly creamy. Retention is fantastic, as is the thick wall of lacing left behind on the glass.

The aroma provides plenty of vanilla, like I hoped for. This note really works well with the subtle barrel presence coming through. Letting this open up will show off some of the base beer, especially the hoppy touch. It hides behind the big vanilla presence, but it does make an attempt to balance things. Additional notes of roasted malt, chocolate, and espresso also appear. It doesn't seem perfectly cohesive - it skews a bit vanilla-heavy overall - but the nose works great otherwise.

At first, the flavor brings a wonderful amount of vanilla - frankly, just the right amount. It could have been too sweet, but the second half of the beer comes to save the day. Like every single LCCB imperial stout ever, there's an assertive hoppiness to finish it off, alongside an impressive roasted touch. I think the downfall of this brew - as good as it is - is how the barrels don't add a huge amount of depth or nuance. It's seemingly smothered by the vanilla, come to think of it. The lack of multiple dimensions ultimately keeps this just out of elite territory.

I find the relatively slender, dry mouthfeel a double-edged sword. On one hand, it's absurdly easy to drink for a big, sweet, vanilla-laden stout (certainly, it drinks closer to 6% than over 11%). But it doesn't really have the mouth-coating fullness truly desired from a barrel-aged monster. Carbonation is a bit above-average for the style.

I really, really like this beer. It satisfies the craving for vanilla nicely, and it's stupidly easygoing for something so big. I just wish it had more depth and a bigger mouthfeel. Still, it's a rock-solid offering that's worth seeking out a second time.

2016 vintage, poured from a 750 into a snifter, the beer is jet black, with a solid, foamy, bubbly, light tan head. Good flow of carbonation feeding the head. Aromas of bourbon booze, rich vanilla sweet, bittersweet and milk chocolate, rich toffee, molasses, and subtle wood char notes. Flavors are heavily roasted and slightly charred forward, with a blend of bittersweet chocolate, solid bourbon notes, rich vanilla, wood and booze spice, and bitter roasted coffee all to follow. Very dynamic palate, and the bitter roasted coffee and charred notes really build at the back of the palate, further hiding that creeping warmth from the bourbon and elevated ABV. Smooth, slick, full mouthfeel, with a bittersweet chocolate and burnt coffee aftertaste. The finish is smooth, slow, and with a solid linger of chocolate, vanilla, and bourbon, as well as a solid building warmth.

Thanks to cejaev for this 750ML bottle: tonight, the last Despot goes down. Just call me Bush. Sherriff Bush. Split with my Cheney, er, wife.

Pours black; no WMD are found in the bottle. Like the rest of these freedom hating beers, the nose is light: light chocolate, light barrel, light sweetness. Light.

Hug the Despot squeezed the barrel a lot more tightly than its brethren. Unlike the others I’ve had, the barrel is up front, boozy & thick. Right behind it is sharp, cutting hops, bittering up the place without regard for my bitter beer face. Nice chocolate, vanilla, edge of roast follow, while black licorice & an ICC indictment complete the profile. Bit thicker than the others, & I’m all over this.

An incremental improvement over the others, this is a very good beer. But I’m going to hold out for the Mother of All Dictator series that they bury & dig up a few years later.

T- taste brings an immediate hit of spicy bourbon, along with wet wood, caramel and char. Mid-palate brings flavors of cocoa, along with sweet vanilla cream, even some hints of spicy rum. The finish brings more vanilla & cocoa, with a linger of heavy bourbon

O- plenty of flavors to be found in this one; the bourbon is prominent throughout and the vanilla surprisingly holds up to the other ingredients. Very well done

Thanks to DCLAguy11 for sharing this one at Wowcoolman's tasting.

Pours an opaque black with a foamy dark khaki head that settles to an oily film on top of the beer. Tiny dots of lace form around the glass on the drink down. Smell is of dark roasted malt, cocoa powder, vanilla bean, vanilla frosting, bourbon, and wood aromas. Taste is much the same with cocoa powder, vanilla bean, char, bourbon, and wood flavors on the finish. There is a mild amount of roast bitterness on the palate with each sip. This beer has a lower level of carbonation with a slightly crisp and medium bodied mouthfeel. Overall, this is a very good beer with fantastic vanilla characteristics that work super well with the bourbon barrel aging.