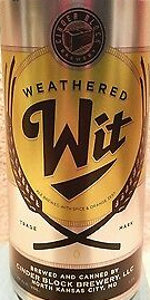 Notes: Weathered Wit is true to style with a light tart flavor, great yeast character, and finishing with strong citrus notes. Our wit yeast does the heavy lifting on this beer producing a complex Belgian flavor resulting in a simple yet refined taste.
View: Beers | Place Reviews
Reviews: 2 | Ratings: 21 | Log in to view all ratings and sort

A - A pale gold color with a one-finger, white head of foam. It left some lacing

S - It smelled of lemon, cracked and spices. There was a subtle fruity aroma.

T - Mostly lemon and wheat. There was a touch of banana.

M - It was crisp and smooth. A light bodied ale.

seemingly just another american wit here, this beer lacked the nuances and distinctive elements that the other beers i had from cinder block all shared. very pale in color and quite light for the style, still hazy, but more yellow than anything else, under a lacy white head with nice retention. it smells fine, you get the belgian yeast and the orange peel right away. impossibly light malt base for the style, and maybe refined one notch too many, as this feels almost watery without a more substantial residual yeast and grain weight. the flavor is fine, good even, but this could be a million other american takes on the style, nothing about it is unique to itself. i like the scaled back coriander, but i want to taste more of the malt, and more than anything i want to feel it. carbonated appropriately, but the body is a bit light for the style, and instead of manifesting itself as a more refreshing easy drinking version, it makes it seem boring and generic. i liked both other beers i had from these guys a lot better than this one, not to say this is bad, but it felt a little uninspired on the whole. good for heavy food i suppose though.