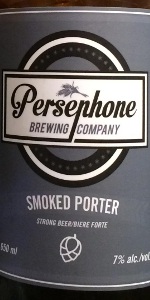 650ml bottle - made with beechwood-smoked barley? Now why does that sound so familiar?

This beer pours a clear, very dark cola-highlighted brown colour, with two flabby fingers of puffy, loosely foamy, and bubbly tan head, which leaves some heavy defrosting windshield pattern lace around the glass as it genially sinks away.

The carbonation is rather meek in its shy-seeming frothiness, the body a decent medium weight, and sort of smooth, if you discount that now pithy smokiness via yer handy-dandy cognitive dissonance generator. It finishes off-dry, the roasted malt character still prominent, and capable of shooing away most of the other malingerers.

Overall, this is a fairly well-rendered smoked brew, the base porter definitely up for the task - the roasty character certainly doesn't overwhelm, instead it just kind of sidles its way into the whole. Speaking of such things, the 14-proof alcohol measure never really introduces itself, which is always a neat trick if you can pull it off.

Poured from 650mL bottle into a tulip.

Appearance: rich, dark brown with some brown-red highlights when held up to the light. There appears to be no haze to the body and the head is a finger of frothy tan foam with good retention that leaves a nice thorough lace on the glass. It's quite attractive.

Smell: nicely smoky but rather balanced with a dryish, nutty malt aroma. It comes together quite well.

Taste: a bit sweeter than the aroma; caramelly, smoky, nutty and a bit astringent. I would say the smoke is a little bit heavy in the flavor which throws off the balance a bit, but in general it's not bad at all.

Overall: the astringency of the smoke in the flavor does reduce drinkability a bit, but this is still an interesting beer.