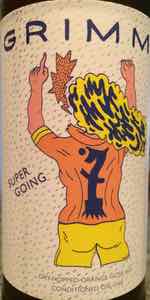 16oz can purchased from the fridge as a single for $5.35. No canned on date and not sure when this was released.

Look: Pours a very pale straw / faint orange color. Has a subtle haze to it. Lots of bubbles quickly rising up the glass. There was a small head that quickly dissipated to almost nothing. After swirling and pouring the bottom of the can, this beer now looks like a super-hazy IPA.

Smell: Definitely smells like a sour beer with lots of acidity. Also get a nice fresh mandarin orange peel aroma. It almost smells like canned mandarin oranges - there are sweet and juicy notes in the nose. There are some other fruity notes but hard to distinguish.

Taste: Delicious. This beer is sour but it is not nearly as acidic as the nose makes you think it will be. It's actually fairly balanced and very drinkable. It has a very nice orange flavor. The beer has a very mild bitter finish - I get some hop bitterness and also bitterness from being conditioned on oak. The salt is also very evident in the finish.

Feel: The mouthfeel is spritzy and the carbonation is lively. I would agree with others that it could use a bit more carbonation.

Overall: This is my fourth Grimm beer and the first sour I have had from them. I think this would be much better if I was able to get it and drink it fresh. That being said, it's still a very good and refreshing beer. Packs a lot of flavor for being only 4.8% ABV.

No canning date, tasted 2/13/21. A very refreshing gose with a salty approach and a tart, dry finish. Could have used a notch more carbonation, but very enjoyable overall. Personally, I had no yeast clumps as one or two other reviews mentioned - for me the appearance was spot on for a gose, clear and golden. Would happily drink this again.

The flavor is dry and the sourness is surprisingly gentle but still assertive; it's tart only on the back end and balanced out by a savory, briny sea salt sensation. The taste is somewhere in the ballpark of fresh squeezed home made lemonade. Bittersweet notes are accentuated by hints of sweet/floral orange oil.

Mouthfeel is prickly from acidity (in a good but odd sort of way) and dry. Light body, lightly carbonated, very little bubbles. It works, but I think it wouldn't hurt to make the body slightly more robust, unless they were going for something flatter than usual.

I've never had a dry hopped gose before so I'm impressed. Although it's not salty enough to my liking and the body is slightly unusual to me, there is great flavor here. I'm impressed with how the hops can still come through so clearly on the palate without being overpowered by the sourness. Definitely worth a shot if you see it fresh and are feeling like something unusual.

A large, airy foamy white head fills the glass most of the way while the body hazes up quite a bit to a nearly opaque orange due to lots of sediment in the bottle. By the way, what the hell is this marketing stating the beer has never been boiled? What is it, tea?

Smell is salty, crisp and orange-spiked lemon-lime with a faint hint of seaweed-infused soft cheese and light wood.

The orange adds a unique attribute to the Gose flavor range, brightening and sharpening it up a bit more than expected. Super Going also has a little more funk than normal, but not as much of the lactic variety, nor is it as salty as other Goses, but there's still a hint of ocean. Being aged on wood maybe adds a touch of complexity, but not much.

Body is moderate, with a light airy froth and a tangy, tingly finish. The thing is, the floating, thick, dark-colored chunks of yeast cake are a bit off-putting and make you feel like you need to dodge them when drinking, which affects the feel and overall experience.

Pronounced dry hops with a light, delicate and refreshing orange zest aroma and taste. Sour is present, but takes a back seat in this beer to the dryness and orange flavor, which are clearly meant to be the standouts here.

Everything a Gose should be with orange for a bigger pucker factor. Nice, frothy head and a decidedly salty, sour flavor. Great summer beer.

This beer pours a super cloudy light neon yellow color that looks a few shades darker than lemonade. The head is two fingers, dense, bubbly and slightly off white. Retention is better than most goses, but still doesn't last more than a minute or two. There are many thing rings of hanging lacing and also hundreds of tiny spots left on the glass. Absolutely beautiful beer.

Smell is very bright oranges. Both natural orange flavor along with orange hop flavor. Dancing in the background after the initial orange punch is oak, acidic tartness, and a touch of funk.

Taste is similar, but less bright than the smell. The flavors blend together nicely, but they just don't quite pop like I expected.

Feel is very light and undercarbonated with a very dry finish. The lack of carbonation is almost off putting which makes the beer seem watery and is probably the cause for the seemingly diluted flavor.

Overall this beer is good, but could be so much better. Every dry hopped sour I've had from Grimm has been absolutely superb, but this one falls short. The look and smell are excellent, but the lack of carbonation really kills this one for me.

Hazy straw color with white head. Aroma has lemon and lime juice but also some pickle juice. Taste is briney and lemony, really balanced and easy drinking. There is also a slightly bitter hop character. Medium body and carbonation. Overall it's a really nice hoppy gose.