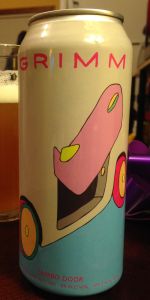 Rated by timdrake from New Jersey

Pours a hazy orange-gold with a big creamy head. Smell is stone fruit, resin, and flowers.

Taste is leaning a bit toward boozy -- but tropical fruit, resin, and bitterness.

Reviewed by Braunmeister_1943 from Pennsylvania

3.86/5  rDev -11.3%
look: 4 | smell: 4.25 | taste: 3.75 | feel: 4 | overall: 3.5
I would have to call this a ludicrous amount of hops, but after some gingerly sips I admit it is quite drinkable. This seems to be the friendlier sort of cloudy IPA in spite of the hot alcohol. The appearance is even rather nice with the hazy but not murky amber brew and plenty of coarse foam. Lush and sudsy in the mouth. Crazy aroma of mango and every kind of citrus.

Flavors of dark grilled peach, dried papaya, and orange. This gets a little sharp as you sip, like too much candied orange peel, but it's not overwhelming. Well worth a try. From the 16 oz can purchased from the West Coast beer store. Dated 01/04/21 on the bottom.


Not bad. better than the session version I had awhile back, but still a touch tacky.

M - Thick and a little chewy mouthfeel with a dry finish, it "sucks the spit off" your tongue.

O - Recommended if you haven't tried it.

Reviewed by Chuckdiesel24 from Illinois

Smell is juicy and bright with notes of peach, peach candy, passionfruit, citrus and honeydew melon.

Taste is juicy, bright and tropical, with notes of peach, gummy candy, citrus, melon, papaya and a soft bitterness. Very well balanced, with a distinct Grimmness.

Mouthfeel is medium, soft and pillowy, but still fairly light, with good carbonation.

Overall, a superb DIPA, everything I hoped it would be.

4.68/5  rDev +7.6%
look: 4.5 | smell: 4.5 | taste: 4.75 | feel: 4.75 | overall: 4.75
Ah, one of Grimm's first DIPAs and one of the first beers I went to a tap takeover specifically to try is now available in cans in New England! For a while, I've been confused about why Grimm doesn't seem to want to distribute their canned IPA offerings in my neck of the woods despite releasing stuff such as Lithos. Guess that may be slowly changing, though I would still love to try Tesseract or Afterimage in a fresh can format. Beggars can't be choosers, however, and I feel very lucky to have access to this beer in any case.

Lambo Door pours a hazy but not overly-cloudy golden yellow color with a generous dollop of foam sitting on top for several minutes before it settles down to a half-finger, leaving behind incredibly consistent lacing. It's just a consistent sheet, and with pretty good legs to boot this has to be one of the best looking DIPAs I've had in recent memory. Of course I don't recall what it looked like when I had it on tap years ago (I think at Tip Tap Room in Boston during a one-night Grimm takeover?), but it's definitely got a great appearance.

The nose is somewhere between tropical, dank, and gummi candy with a core of intense resin followed by notes of bright citrus (tangerine, pomelo, and lighter notes of lemon) and fresh papaya juice with some mango and passion fruit as well. Maybe a lychee aspect along with some unique tannins... there's a lot going on. Blueberry, raspberry, and grapefruit with a hint of the ABV. The combo of El Dorado, Citra, and Simcoe is ridiculously potent here.

First sip is nice and juicy with flavors ranging from papaya to mango with a hint of citrusy pithiness and light bitterness in the finish. Some light stone and orchard fruit flavors cover the mid-palate and provide some complexity. The finish relies on Simcoe to really push big bitter and piney elements that transition out from the softer middle, and Grimm really achieves a great thing here with that approach. This is hefty and super juicy/fruity but has a great back-end that carries a lot of good flavors and an actual "IPA" type bitterness without ruining the soft suppleness built up throughout each sip. Feel is mostly soft and creamy with a slight prickling of carbonation and a touch of syrupy sweetness right before the bitter hit at the end. It's just a very well-crafted DIPA that should impress old school hoppy pale fans and new school hazy people alike. If I remember correctly, this kinda came out before NEIPAs were a thing and it still feels like a new beer that was a bit ahead of its time. If I were you, I'd seek it out... yes, you will pay a premium. Yes, it will be worth it. Trust me.