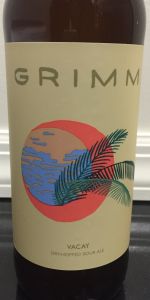 Reviewed by Hayesbro from Pennsylvania

Reviewed by TheBrewsky from California

4.17/5  rDev +3.7%
look: 4.25 | smell: 4 | taste: 4.25 | feel: 4 | overall: 4.25
Drank from a 16oz tulip glass. Bottled in March of 2018.
Look: Pours light yellow in color, and collectively looks vibrant yellow in color. Haze a cloudy look to it. 2 fingers worth of head from a non-aggressive pour. Moderate amounts of residual lacing on the glass.
Smell: Citrus fruit forwards, where lemon and lime seems to be the most prominent. Grapefruit also present on the nose, along with some tangerine and orange. Slight hop presence on the nose, contributing to a lemongrass like smell.
Taste: Follows the nose, but more lemon and lime forward. Has a slight acidic and salty attribute to it as well. Hop presence is minimal. Slight apricot and peach flavors as well, along with orange and grapefruit sourness.
Feel: Medium-ish body with medium levels of carbonation which seems to give a fizzle feeling on the tongue. Has a soft feel to it, despite being a sour.
Overall: Another very enjoyable offering by Grimm. For a nice day, this is perfect. Low abv and very easy drinking. The sour aspect of the beer is presented very well. I am grateful to have tried this offering, which is another delicious beer by Grimm. Cheers!

3.97/5  rDev -1.2%
look: 4 | smell: 3.75 | taste: 4 | feel: 3.75 | overall: 4.25
A: The beer is very hazy pale yellow in color. It poured with a half finger high white head that quickly died down, leaving wisps of bubbles that covered most of the surface and a thin collar around the edge of the glass.
S: Light to moderate aromas of sour limes are present in the nose.
T: The taste follows the smell and has light to moderate, yet subtle flavors of limes with notes of sourness and hints of stone fruit.
M: It feels light- to medium-bodied and slightly tart and creamy on the palate with a moderate amount of carbonation.
O: This beer seemed very delicate and drinkable, yet it still had interesting amount of citrus flavors and sourness. I could see this being a good beer to begin a drinking session, somewhat akin to how a pilsener opens up your palate.

Appearance (4.5): This pours out a solid two and a half to three fingers of custard-colored foam, fine like meringue at the edges but rocky and chunky in the middle, crackling away steadily but fairly slowly for a sour. It caps a hazy, pale golden-colored body. As the head dies down, it leaves some clingy lace all around the glass.

Smell (4.25): It errs on the side of funky lacto in the nose, with a yogurty twang blurring the lines of some musky, overripe papaya and a touch of passionfruit. White grape, gooseberry, a bit of wild grass, and lemon curd pick up the back end. It’s dry as a bone, not showing much malt to speak of. A bit of orange marmalade creeps up as it warms a bit, while passionfruit dominates in the end.

Taste (4.25): Yowza, this is tart. It kicks off with a puckering, slightly bitter sourness that’s one part orange zest and three parts lime warhead candy. Here, a little more malt shows through, in the way it presents a pale, starchy, grainy palette: oyster crackers, baking soda biscuit tops, and wheat sourdough crust. The initial sourness transforms into a more dynamic mixture of fruity and tart flavors, like limeade with some passionfruit funk, topped with some fresh cut grass. The yogurty funk suggested in the nose is downplayed on the palate, leaning (far) away from dairy and (far) toward lemon/lime—which works with the hops beautifully. It takes on a spritzy, juicy character towards the finish, like a limeade-flavored mead with oats and wheat in it. No booze; no surprise there. It finishes with a surprisingly pleasant minerality, suggesting pinot grigio.

Mouthfeel (4.5): This comes off as more effervescent than I usually enjoy in sours, but it works here for some reason—probably because of the aforementioned limeade mead vibe. That said, the carbonation is actually fairly modest, diffusing across the palate with ease but without hurry, before creeping into a fine-pointed fizzle on all surfaces. It feels more pronounced, however, due to the zippy lime-like sourness and pale, starchy grain bill that leaves the palate high and dry but short of parched. This is incredibly easy to drink.

Overall (4.5): Like, you know what my dream is? For beers like this to be available in cans and to be fairly inexpensive, so that you could drink them any day you want. A summer crusher, but ineffably balanced in its delicate, fringe characteristics. It’s nuanced as fuck. Seriously, though, it’s almost challengingly sour, but turns around and offers a lean but firm bed of grains, subtle mineral tones, and a pronounced fruit character that hides behind all of the acid up front. It’s not hiding anything, but you also don’t get everything all at once. I could go on, but what’s the point? This beer is excellent. It’s got character, depth, levity, nuance, and also sheer crushability. For me, this is what sours should be. Highly recommended.