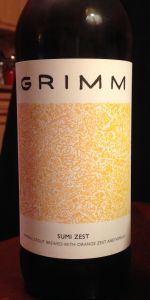 Definitely would consider myself a big fan of Sumi Ink, so without further ado let's see what's going on with this orange zest/vanilla imp stout.

Pours a brutal, dark brown which builds up to a black beer topped off with a dollop of creamy mocha head that sticks around for the entirety of the time I sip at my glass. Lace seems quite great and the obscure appearance is at once inviting and imposing.

Nose has some bright citrusy fruit, obviously from the orange zest, atop a sweet and roasty stout base. Creamy milk chocolate and dominant orange are the most apparent notes here; even the vanilla gets a bit pushed away by both of these aspects, but it's still definitely there.

On the tongue, this comes across very heavy-duty... an industrial-strength imperial stout laced with slight asides of orange, creamy vanilla and chocolate. It's not as sweet as its bigger brother, but it definitely isn't overly-roasty or citrus-dominant either. There's a pretty fair treatment of the adjuncts here, honestly. I definitely get both of them but neither are overpowering. As in the nose, the chocolate flavor is the biggest thing here, kind of bolstered by the vanilla and playing off the tang of the orange. Slight dusty yeast and chalky cocoa powder meld with semi-sweet chocolate notes and a good kick of orange zest, while the finish comes across full-bodied and semi-sweet as well.

Not as dry as it should be, probably, and that might be one of my biggest faults with this, which is otherwise a fantastic beer. It doesn't feel as decadent as Sumi Ink, but it doesn't have to either, and delineates itself quite nicely without feeling inept by comparison. The carbonation is on the lower end, probably intentionally, and the body has a chewy quality.

Sumi Ink was a very good vanilla BBA stout, and, while this one doesn't have the barrel treatment, the base beer is fantastic and the addition of oranges livens up the flavor and provides depth while not overtaking the palate. I'm a fan, once again!

A: Poured into a snifter to a black beer topped by a dense finger of light tan head which fades slowly to a collar around the edge of the glass with minimal lacing.
S: Smells of milk chocolate sweetness with some coffee and roasted malts in the background. This smells a lot like a milk stout but there's no lactose. The slightest amount of vanilla and orange are present on the nose as well.
T: Taste is chocolate up front with a strong blast of orange zest. Coffee and roasted malts come in as well along with some vanilla sweetness. Nice smoky charred wood notes on this as well but the sweet chocolate, orange, and hints of vanilla keep coming back around. On the finish this one is nice and roasty with some lingering chocolate covered espresso beans.
M: This beer is silky and creamy with a full body. Carbonation is low but adequate for the style while the beer has a drying finish.
O: Overall this is a really nice beer. The adjuncts aren't too over the top and the base beer is very good. This allows the beer to have some really nice complexity and drinkability. I wish I would have gotten to this one sooner when the vanilla would have been more prominent.

Served chilled into stemware and allowed to come to temperature over the course of consumption.

HEAD: Creamy khaki colour head with a nice robust consistency and good complexion. Not the rich tan with a shining complexion one would find in the very best expressions of the style, but pretty good generally speaking, with average head retention (~2 minutes). Leaves a nice coating of thick lacing on the glass' sides as it recedes.

BODY: Predictably, it's an opaque black. No yeast/lees is visible within, but given its opacity it's hard to determine if it was filtered or not.

Appears aptly carbonated. Not an eye-catching or lively appearance for an imperial stout, but an above average one I suppose. Something like Victory's Storm King or even Great Divide's Yeti would be more enticing, if we're nitpicking.

AROMA: Genuine vanilla bean is the first thing I notice, sitting atop a dark malt & chocolate malt driven sweetness. Even when prompted by the knowledge it must be there, it takes me a good beat to find the orange zest, and this aroma fails to evoke the kind of orange peel chocolate bar vibe I expected Grimm to be going for when I learned of the premise. Cream. A blip of whoppers/malted milk ball character. No roasted barley, really (unfortunately).

The vanilla is the highlight here, but as far as imperial stouts go this is pretty limited in terms of its complexity judging by the aroma. I don't expect all the adjuncts everyone throws in to imperial stouts willy-nilly these days (am I the only one tired of all these hazelnut marshmallow maple syrup bourbon cacao nib brown sugar honey vanilla coffee monstrosities?), but the fundamentals aren't necessarily in place judging by this aroma; the absence of roast or any other bitterness source (e.g. coffee, charred malts, burnt sugars, hops) raises questions about potential balance issues.

In any case, the vanilla is enough to get me interested and there are no off-flavours. It is a bit of a shame the orange is so reticent, but then I'm not keen on orange peel chocolate bars anyway.

Aromatic intensity is average. Suggests a balanced but simplistic (for the style) brew with wanting depth of flavour but a nice vanilla flavour.

TASTE & TEXTURE: A silky smooth creamy mouthfeel accentuates the rich vanilla flavours, which exude authenticity, eschewing that artificial vanilla flavour/barrel vanillin flavour that's so common in inferior expressions of the style. It also commits to the vanilla bean, not shying away from showcasing it. The result is a vanilla-emphatic but not vanilla-dominant brew.

Vanilla doesn't lend too much sweetness atop the dark malt and chocolate malt backbone, even given the unfortunate absence of any roasted barley bitterness or charred barrel/charred malt bitterness. It's surprisingly well balanced even with no overt bitterness-providing element in the mix; chalk it up to carefully handled subtle hopping I suppose.

Cream is there, a blip of malted milk ball, maybe a hint of caramel...other than that, indeed it's quite simplistic for an imperial stout (especially in 2017). But balance trumps complexity for me any day of the week, and I'm surprised this isn't overly sweet given its ingredient choices. Well-executed in that regard.

The mouthfeel supports the flavours the beer is delivering neatly, with an apt medium to full-bodied texture that isn't too hefty, thick, syrupy, or heavy on the palate. Carbonation is a bit too high, but it's fine. Not oily, astringent, harsh, gushed, hot, rough, or scratchy. ABV is barely noticeable.

Vanilla is most present lingering in the aftertaste; the malted milk ball/whopper flavour and caramel are loaded up front. It's a bit of an uneven structure, but it works well enough. Flavour duration is above average as a result; that vanilla stays for a beat. Flavour intensity is average for an imperial stout.

OVERALL: Fans of hugely intricate and flavour-packed imperial stouts will find this wanting, as will those hoping for vivid flavours across the board and/or a truly gestalt harmonious build. The reticence of the orange zest (read: nonexistence) is fine by me, but some may be let down by its absence. It won't make my Top 50 of the style, but the soft silkiness of the mouthfeel playing with the rich expressive vanilla bean alone is enough to warrant giving this a try, if only once. Grimm asserts the reasons for their high regard amongst NYC craft beer drinkers in the know with this enjoyable brew, but by no stretch is it an incredible imperial stout - merely a rather good one. If offered at this price or a little higher in six packs, it'd be a regular rotator in my fridge.

Barely translucent black pour turns pitch in the glass, with a fat finger of dark foam that slimmed into a shimmering cap and trailed motes of lace down the glass. Aromas of orange zest, vanilla, and chocolate on the nose. The flavors are right in line - suggestive of an orange creamsicle pop dipped in dark chocolate. The feel is round and soft, medium-full-bodied, and smooth. Aftertaste has some orange zest and chocolate lingering behind with a mild bittersweet roast.

fun one from these guys, a lightly but uniquely flavored stout, not quite as good as the sumi ink, but an impressive beer nevertheless, thanks to my man back east for keeping the steady stream of grimm coming out for me! cheers dude! shiny and heady, always pretty to see lighter colored foam resting effortlessly on coal black beer like this. persistent and airy, very pretty. i smell the orange for sure, its zesty as the name suggests, a little bitter, very true, but its well below the level of potency that would make this smell like a chocolate orange, its not forced, its an accent at the most. the same is true with the flavor, its nicely restrained. the vanilla is subtle too, a nice layer of sweetness with it, a great counterpoint to all the dark malt, which is bitter in the finish, starchy like maybe some oats are in the mix, and its well chocolaty, really nice with the vanilla. i like how its not so in my face, its stout before its flavored stout, and i think thats an increasingly uncommon situation. lots of dry ashy roast here, subtle coffee, burnt bread, toasted coconut, and the fresh citrus cutting through just a little bit. weighty but dry by the end, it has a wonderful texture. huge beer on paper, but its not like that in the glass, no heat to it at all, very mellow which is cool with the freshness of the citrus, its like mature and brand new at the same time. fun one to share with homies, and a cool start to a heavy beer session on a very cold and snowy late spring evening! a neat mix of seasons in the glass too, very nice!