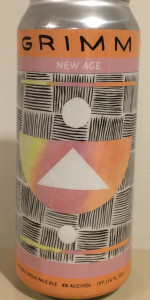 I found this to be a very mediocre beer, but solid from Grimm. Better than the average can or beer that you find around the city, but doesn't stand out to me.

Traded for this a while ago and took a while to get around to. The date on the bottom of the can read 1/29/18 but this held up well over the year and a half that I had it sitting in my basement. While not among Grimm's better offerings, this was a decent example of an American Imperial IPA that didn't feel strong and went down easily. I've just become so accustomed to expecting more from these guys that this was a bit of a letdown for me...

The pour to this was like honey, but much thinner and with some fine haze in the liquid. Plenty of head topped this off but there wasn't much lacing to be seen aside from the few thin rings along the top of my pint glass. Quite a dank and outdoorsy aroma to this beer as there was lots of pine, forest, weed, chocolate and as the taste followed suit. This felt like something from Humboldt out of California as it was a hemp-lovers paradise. Full of hemp, resin, and hop oils, the slickness of this was reminiscent of tangerine juice as the bright and pithy citrus mouthfeel emerged once this fully warmed up.The malt was full of cracker and full, which allowed the fruit flavors to fully shine, in all of their deep and pithy goodness.

There was enough booze here but with such a heavy-handed presence going on, that was hard to directly discern. The carbonation could have been a bit more energetic but in the end, this was a change from Grimm's usual fare while being as enjoyable as what I was accustomed to from them. Love West Coast IPA's? Then you'll need to seek this one out!

Pours out with a medium haze, and leaves quality looking gauzy froth and a load of fine sheeting.

Oranges and herbal hops on the sniff.

The can says to tool it in order to release the haze. It works! Very cloudy with a tight moderate head. Good lacing and active carbonation make it a lively looking brew.

Nose is sweet and juicy with mango, melon, citrus. A mild peppery bite. A large dose of pine and guava. Some pale malt sweetness and light toasted grains.

Taste is top fight. Nice malt backbone is sweet and bready. Tropical fruits explode off of that foundation and deliver mouth watering hoppy goodness. Firm bitterness in the finish with a light coating of hop oil that stays to offer a drying, light, mintiness and more bitters. No trace of the abv.

Medium body with a tingly, active carbonation that flows into a bit of cream. A velvety swallow and a delicious drinkability. It goes down like a session beer.

This is an exceptional DIPA. Grimm has really outdone itself.

Hot damn they did it again! It's like stone with IPAs all the time. .. Except they are worthwhile