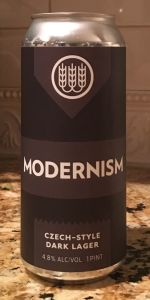 Notes: Modernism is inspired by the Czech black lager tradition. It features a deep complexity from the decoction process and a hop schedule typical of Bohemian beers. Notes of dark malts, bittersweet chocolate and caramel dominate. The finish is dry.
View: Beers | Place Reviews
Reviews: 14 | Ratings: 38 | Log in to view all ratings and sort

Poured from the can into a pokal style glass.

A very deep red ruby to mahogany like body color, with a fine khaki two finger tall light looking head. A good settling puck on top, and some nice fine reams of carbonation through a dark gleaming body that has lots of clarity up through the top. Real nice looking beer.

Real inviting aroma too. Light toast grains, hinting of a real nice brown bread toasty crust. Fine notes of sweet caramel in the mix, a little bit of spicy hop or herb like presence as well too. Very nice.

Good vibes on the palate continues. Crispy but rich dark malts, a flavor that hits with a coating of light toffee and dark toasty grains. Clean and light bodied but with full malt depth, flavors of chocolate, dry cocoa, crusty almost charred breadloaves, and even char like embers a bit. Playful carbonation makes for a fun finish, a pop that cuts through the palate to make for a lively flavor. Clean and rich as well.

Poured from can into glass. Very dark reddish brown with no haze, off white short lasting foam. Very faint caramel/toffee aroma. Roasted malts come through but don't overpower the sweeter caramel notes. Bitter but not much hop character. Light body, dry finish. An overall pleasant beer that seems a bit lighter in body and malt density than the ones in Czechia. Nice to see US breweries attempt a fairly obscure style.

I bought this off a liquor store shelf after having Schilling's pilsner on tap and being very impressed. A 16 oz. can packaged on January 03, 2020, poured into a Willi Becher glass on February 8, 2020.

The beer is dark but not pitch black. A touch of light is visible around the rim of the glass. There's a sizeable head that dissipates quickly. It's a good looking beer.

The nose is malty. Roasted notes with a hint of bready yeast. It smells like a lager, certainly - a complex one.

The beer tastes delicious. More of the roastiness balanced with yeast and a hint of the classic Saaz hops one would hope for in a Czech style lager. While it's very tasty, I find myself wanting more hop bite. The maltiness overshadows the hops in this beer.

Overall: an excellent dark lager. Given the Czech style marking, I expected and wanted more hops. The price is also a bit high in my view, at $14 for a 4 pack. But if you don't mind the price, you won't regret buying this beer.

On tap (revisit in can w/o date)
Has the look of a brown ale/lager with very nice clarity inhibited only by its chestnut color. Head is mildly impressive; though not grand, it lasts and provides fleeting lines of lace.
From the can, the pour is a medium brown color, like a brown ale, though once in the glass, it follows my original review.

Nose sticks to the story the look foretold with brown beer malt profile: medium toast with a fair amount of nuttiness. There’s a somewhat earthy hop presence.
From the can, the toast is darker with some impression of pumpernickel. There's also a strained weak coffee note that is a tiny detraction from the more roasty nose.

Taste follows suit, a little bit of sweetness to the medium dark bread, a slight nuttiness, and an earthy to neutral countering bitterness. Carbonation is a tad bit aggressive, weight is a tad more towards medium than I expected.
From the can, there's a bit more roast malt bitterness, for sure, but also seemingly a little more sharp, grassy bitterness in back.

I did like the beer as a Dunkel-like offering. As a Czech dark lager (brewery-stated style), it’s a bit off on the darker malt profile and the bite of the Saaz. Seeing other reviews, I have a slight question as to what’s in my glass, but the bar has no other offerings near this one, so unless they hooked up the wrong keg...
The can doesn't seem that Dunkel-like, though I am a tad curious about the age. I'd seen the cans before in my store, but thought the delivery was a new one. Either way, the increased bitterness is definitely more porter than Dunkel.

This one pours a very dark black color, with big fluffy white head, and lots of lacing.

As expected, this is quite good. It's very roasty and bitter, with a light smoke to it, dark chocolate, dried fruit, light hops, and a nice creaminess on the back end.

This one finishes very dry, with a nice creamy but light body, and a great amount of drinkability.

Every time I have another black lager, I wish more breweries made them.

Canned 10/04/19, picked up a 4-pack at the brewery in beautiful Littleton, NH.
Warning: doing something rare here on BA....rating a beer according to its style!! What a novel idea by not comparing this to a NEIPA. While I’ve had only a few examples of this style over the years, I can’t imagine many versions being better outside of the Czech Republic. Dark yet not heavy, thin body but full flavor, smooth feel yet crisp finish. So easy-drinking and a perfect ABV%. Amazing!

nose is quite good, dark malts and sweet molasses, toasted reddish malts and brown malts but not caramel, a touch of dark fruits from the malt likely, with roasty malts as well bringing a little coffee and dark chocolate, nice roast level, and faint earthy hop

A- A dark brown, almost black, with a two finger mocha head.

The beer pours a mahogany brown with ruby red hues when held to the light. A fading tan head.

There is a roasted, char, and nutty forward malt character in the aroma with a lower profile floral note.

The taste is sweet, roasted, and kind of burnt but the finish is clean and crisp. Decent.

L-The beer pours a lovely black with brown around the edges. The head is 3 fingers of tan foam which lingers. Lacing is spotty as the head recedes to a thin film.
S-The nose is a nice mix of dark malt and light grassy hops. The malt has a somewhat sweet yet roasty presence.
T-On the palate the beer is a less sweet version of the nose. Malts still lead the way with the roast and sweetness well balanced. Grassy hops keep everything under control and linger to the end of the sip.
F-Overall the mouthfeel is on the lighter side as you'd expect for a lager. Carbonation is medium.
O-A nice easy drinking dark lager. Delivers on what you expect. Could maybe use a touch more bitterness, but I got no real complaints. Worthy of a purchase if your in the mood for a dark lager.

Pours a chestnut brown with tan head that quickly recedes. Smell is of dark malts. Taste is of dark malt sweetness, some roast, ends fairly dry. Feel is light and seems undercarbonated. Not a bad dark lager in a style that doesn’t have a lot of domestic examples. Still, I felt there was something lacking to take it from good to excellent.

On tap at The Blackback, Waterbury, VT. The appearance was a nice looking dark brown color with a one finger white foamy head that dissipated within less than thirty seconds leaving some light lacing here and there. The smell had some light dry grassy hops slyly moving into roasty coffee. The taste was mainly the same. Dry in the aftertaste and finish On the palate, this one sat about a light on the body with a fairly decent sessionability about it. Carbonation runs fairly smooth and light. Overall, I say this was a pretty good dark lager. I could see myself coming back to this.