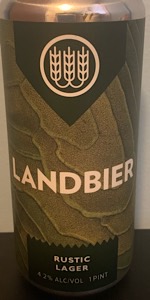 Notes: Agrarian-style lager of Franconian origin brewed with spelt—and for the first time in North America, by Schilling’s brewers—with nearly extinct strain of lager yeast just revived from the cellars of Weihenstephan in Munich. Notes of strawberry, and hay abound with a hazelnut-like dry finish.
View: Beers | Place Reviews
Reviews: 15 | Ratings: 38 | Log in to view all ratings and sort

A - Pours a clear straw yellow with a sturdy white head. Tons of soapy lacing.

T - The taste is cracker malts, white pepper, lemon and some light earthiness.

From the pint can, it pours a clear yellow gold color with a nice white head that soon diminishes to a nice ring and leaves a bit of lacing. In the nose, it is grainy and fresh. in the mouth, it is the same. Pleasant and unassuming.

Pours a pale straw color with a finger of frothy white head. The nose is smells like whole grain crackers. The flavor is reminiscent of a Kolsch - crisp and light - but without the dryness on the finish.

When I saw the term "rustic later," I thought it would be heartier.

A- 16oz can pours into a becher with an about as pale as can be golden, clear yellow hue. The head shoots up quickly to a finger high with a sturdy creamy texture. Massive blankets of lacing decorate the glass.

S- Simple and straightforward but brings moderate aromatic strength of what is here. Grainy and slightly corny pale malts with spicy and floral hops. A decent hit of that lager funk rounds it out. A touch peppery and crackery and I don't wanna say skunked but it kinda leans that way a bit.

T- Not really corny here but more straight up bready, crackery and very grainy pale base malts with a touch of sweetness but more towards the dry side. Spicy and floral hops round out the flavor with a light-medium bitterness. Tiniest bit of pale fruits in the backdrop.

MF- Light bodied overall consistency with a silky and fairly creamy texture. Really soft and smooth. Carbonation is on the high side and it finishes with a clean floral bitterness.

Can, no date:
A pale golden stream poured from the can, and while the cold liquid fogged the glass, the beer is actually more hazy than expected. A strong white pillow of white adorned this hazy mass, leaving parts of itself to be remembered like fossils in the geologic strata.

The nose fits the bill for the proclaimed style - it's got the lighter malt backbone as the main influence with a bit of a grain aspect, paired with a mix of grass, vegetal, and ever so slightly skunked hops. It gets a little sweeter as it warms, with the hops edging a little more floral.

The first half of the taste is a tad bland - grain husk and a mineral/metallic aspect involved. As the liquid washes along and effervescence fades, there's a mash up of grassy, vegetal, and even a little herbal bitter notes - a melange of greenness. That might sound wonderful to a hop-head, perhaps, but it's not an intricate mix... it's a conglomeration. Plus it's mixing with the mineral aspect to produce a... not offensive, but not intriguing, profile.

Now feel is where it works really well. It's a dry beer that has both feet on the bitter side of balanced, and as such is enjoyable enough. It isn't even considering weighing me down, but avoids being watery despite its light feel. I could totally see having a couple of these at a spring or fall back yard cookout instead of what would likely be stocked in the cooler.

Can from the Packie
Mostly clear light gold in color with a frothy white head that persists. Rich crackery light toasty maltiness with a floral spicy hop to counter. Tasty Largah!

A: The beer is relatively clear light straw yellow in color and has a slight amount of visible carbonation. It poured a narrow collar of bright white bubbles around the edge of the glass.
S: Light to moderate aromas of cracker malts are present in the nose along with faint hints of nutty malts.
T: The taste follows the smell and has flavors of cracker and pale malts with faints hints of nutty malts in the finish. There is a ever so slight amount of bitterness.
M: It feels light- to medium-bodied and somewhat clean on the palate with a moderate amount of carbonation.
O: This beer is very easy to drink and seems like it would pair well with virtually any type of food.

Can. Pours a clear, pale, straw yellow. Bright white head. Very enticing looking beer. Rustic is a pleasant descriptor used by the brewery. Definitely get a rustic yeast quality on the nose. Almost like a sourdough bread. A little barn quality. Flavor has tangy yeast notes, noble hop, dried cracker, and a slight fruitiness. Really easy to put down. Just enough intricacy to stand out. Drinkable and crisp but also has it's own scuzzy personality traits. Schilling can make a good Pilsner. This one isn't my favorite from them but it's still a good time

Can says "Rustic Lager", but I thought Landbier was a specific style. I had one in Germany a couple years ago which was much closer to a dunkel, with toasty caramel flavors and a nice lightness.

This one is:
Pale yellow, bready malts and a hint of honey nut grain, earthy noble hops with a touch of spice.
A fine and tasty pale lager.

...
Some additional research indicated actually landbier is in fact not a defined style and ranges from light to dark versions. Really a "rustic" local beer and each brewery tends to make their own different favorite version. This one was good, I guess I just need to find more examples!

Pours a pale golden. Cereal grains on the nose that certainly carry through flavor-wise. There's a sweet corn flakey honey malt finish that is kind of surprising. I was a little surprised by the cereal character and I'm not a huge fan of this, but it does pair well with food and got better as I drank it.

Can to lager glass.
The appearance was a nice looking light golden yellow color with a soft finger's worth of white foamy to semi-bubbly head slowly falling off.
The aroma had a wonderful blend of sweet grassy hops to a great level of sweet biscuity/bready/white cracker malt through a little bit of lemon to hay-like sweet features.
The flavor leaned towards the sweet side through the biscuity/bready tones with some lemon and hay. Mellow aftertaste of breadiness, lemon, hay and grass.
The mouthfeel was about light bodied, perhaps just a touch above. Good carbonation with a lean smooth crisp wet finish.
Overall, I like this one preferably for me and would love to have again with some food. And I can see how putting this in the European Pale lager is a nice catch all sort of style to keep fairly high numbers on this.

Pours a clear straw gold with slight lemon-lime hues and topped with barely a finger of frothy, off-white foam; head fades quickly to a spotty veil of cloudy cap, moderate frothy collar, and a smattering of light, stringy lacing.

Aromas offer crisp bread crust and a stiff crackery malt robust and prominent upfront, with peppery roasted corn husk steadily introducing a mild sweetness in the backdrop; touches of lemon peel and grass along with fruity hops develop over time, meshing with flaky hay for a crisp, earthy close.

Mouthfeel light body, moderate-high carbonation; flaky and mildly effervescent along the palate, with touches of subtle bitterness on the otherwise relatively quick finish and a lingering, mild grit through the swallow.

Balance, gritty crispness, and an effortless palate mark this take on a Euro Pale Lager, a style typically reserved, but amplified to a robustness leaving a drinker swiftly satisfied at this higher-end take.

Picked up a can of Landbier at the Nashua Beer Shop this past week. I've enjoyed a number of different Schilling products in recent months but had never seen this one before. My first experience with a "Rustic" Lager so wasn't sure what to expect. Turned out to be one of the best Lagers I've had in quite some time - light tasting but very crisp with a solid body. 4.2% ABV was perfect for this product. A refreshing antidote for the excess of IPAs in todays beer scene.I hope this isn't just a seasonal as it would seem to be a beer for any season. Wish I had purchased a 4-pack but will satisfy that wish in the near future.

It's almost gone. Nearly forget to rate. Can. Straw color with some light haze and decent head retention for a lager. Very grassy aroma medium sweet bready with medium light herbal finish and soft mouthfeel for a lager. Excellent.

Poured from a 16 oz can into a stemmed pilsner glass.

Pours an ever so slightly hazy golden straw color with 3 fingers of soapy white head. The head leaves some random splotchy lacing as it slowly dissipates into a thin sheet.

The aroma brings notes of peppery spice, hay, crackery malt, and roasted nuts, with some more subtle notes of citrus and strawberries.

The flavor is exceptionally clean. Lots of grassy notes and hay, with some cracked pepper, sweet malt, and lemon zest. Faintly nutty with some notes of strawberries and blueberries. Finishes subtly earthy and hoppy.

Overall, a great European lager that is so clean and refreshing. The flavors are both familiar yet unique for the style. I could drink this beer every day forever.

Landbier from Schilling Beer Co.
Beer rating: 82 out of 100 with 38 ratings