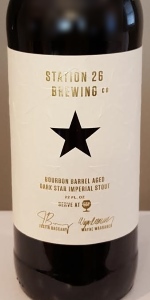 A-A normal pour produces a half-finger of dark brown, walnut colored head. The foam is a pretty color, deeper than most beers, but it fades quickly to a shiny film and collar of bubbles. The beer beneath is nearly black and still.

S-This is a tightly wound brew. At first I sniff heavy roasted malts, wisps of char and smoke, some barley grain, drying oak, and dark chocolate brownie batter. The beer opens up a little more as it warms to room temperature. I'm starting to pick up more fudge notes and hints of caramel. There is a lot of heat here too.

T-The taste tracks the smell mostly. A 50 degrees, the beer is bound up and all I taste is a lightly bitter roasted malt note, some raspy oak, followed by alcohol on the finish. The alcohol is intense at first, cinnamon and red hot candies like a neat sip of bourbon. As the beer warms up I start picking up fudge, cocoa, and a bit of soy sauce.

M-Dark Star is moderate to above average in heft. There is a little wave of fine carbonation. Not terribly sticky.

O-I like Dark Star, but I feel that it is leaving something on the table. I kept thinking it would open into something even bigger and better after a few more sips, but it never really got to amazing. This beer likes a little temperature to reveal its flavors. The tightly wound flavor profile reminds me of a wine that is intended to age and I'm wondering how a year or two in the cellar would help?