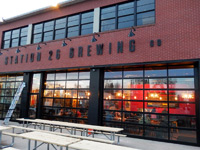 Atmosphere - very cool little joint in the Stapleton area; in an old fire station. Plenty of seating at bar, tables inside and on the big patio. Glass doors that can be opened up on nice days! No food served, though there are always food trucks and you can bring in your own food, which is always a plus!
Quality - the beer is good, but nothing outstanding.
Service - busy place, but service still seemed fine.
Selection - plenty of decent options with flights available.
Value - no beers that I've tried so far that I'd rush back for; so I'd look elsewhere. The atmosphere is fantastic, so they've got that going for them.

Cool brewery in old fire station on the east side of town. Large L-shaped bar along the front seats about 20 with a small counter section along the partition separating the brew house from the tasting room, and a large covered patio in the front. With the doors open the place feel like you're out doors. A dozen beers on tap, I had the Oktoberfest, Galaxy Juicy Banger and Born to be Mild, all solid. Friendly fly personable bartender. Occasional food truck. Seems like a great place to unwind, with plenty of free parking.

A nice place in, appropriately enough, an old fire station. They have some really good beer and the converted taproom is cool. A top 5 spot in any other town. Too much good beer around to mark this place a can’t miss.

Nice relaxed atmosphere in an old fire station. Was a perfect Fall day when I visited so the garage doors were open on to the patio.

Decent selection of beers - tried a few IPA's and they were well made.

No food be seemingly always a food truck parked outside.

Worth my visit, if I lived in the area I'd be a regular.

Luck would have it I found this place on maps and it wasn't far from our hotel. REALLY liked this place. Relaxed vibe, unfussy surroundings and good beer in an unpretentious part of town. Even my macro drinking wife found some of their beer to her liking (a minor breakthrough).

Nice to see them win a couple of awards recently.

V-Station 26 is located on the east side of Denver near the old airport-now neighborhood of Stapleton. The place is obviously an old fire station with the tile and garage doors opening up to give the place a light and airy feel. A large patio out front was covered by a tent when I visited on a gorgeous, unseasonably warm day in early December. The patio was full and the space inside was busy too, but there was room for me a the large bar. The crowd was older than the average Denver brewery but there was at least one dude with a crossfit shirt and hair that had clearly been gelled and styled to poke out from under his backwards baseball hat, so.... Not sure why, but I was not overly impressed with the feel of the place.

Q-I have tried about a half-dozen beers and been impressed with almost every Station 26 beer I have tried. They really do hoppy beers well, e.g., Juicy Banger, but I tried a chocolate rye beer, and was impressed by that one too. I'm looking forward to cracking my bottles of their BA stout.

Ser-The bartenders were friendly and prompt. My two pours arrived in proper glassware with a nice head too. I didn't chat too much because they were busy, but they seemed to know about the beers they were selling.

Sel-Station 26 had ten beers on tap when I visited, all of which were brewed by Station 26. The lineup was a mix of flagship offerings that you could buy anywhere in Denver, and one-offs or seasonals. The style spectrum spread from pale to cream ale to pumpkin to BA stout.

O-I like the beers more than the vibe here. Not sure that I would make a journey to visit, but the beers are quite enjoyable.

One of my favorite breweries in Denver.

Station 26 is located in an old fire station, and they did a great job keeping the decor in the fire house theme while still looking very clean and classy. Place is usually pretty crowded, especially on their monthly Sunday "brunch" days. But there is a decent amount of space to spread out outside if the weather cooperates. Very family friendly which is a plus for me as well.

Quality is quite good. I've tried many of their offerings and they seem especially good at nailing hoppy styles. Selection is usually around 10 beers with a pretty good variety as well.

Service is adequate. They can been slammed as mentioned, and that can slow things down a bit, but they seem like they do the best they can and are still pleasant enough.

The location is a bit east of downtown, but I almost always recommend this place to Denver visitors.

people always talk this place up, have been since they opened. it took me a long time to finally get over here and check it out. we had a great time, hung out for hours, but the beers didnt turn me on too much. aside from the juicy banger and the tangerine cream, i really didnt love much of the beers. a limited selection and also a pretty safe selection in terms of style. i expected a somewhat more innovative lineup here. nothing was awful, but nothing came close to blowing my mind either. the vibe is great though, in an old fire house with a ton of outside picnic seating, a long bar, and plenty of people working to service the large crowd. nobody waited longer than a minute for a beer, they seem to be well a trained and very efficient staff, friendly too. wonderful place to relax with a nice breeze blowing though. the brew house is along the back wall, surprisingly small for how often i see their beer in bottle shops and in pubs. they must have an excellent salesman and a very hardworking brewer! overall a better place to chill than it is to discover world class beer. they have been smart about their cans too, releasing only the very best of what they do. it must be hard to keep up with demand out here, which explains the limited selection. the beer was better than i am making it sound, but it didnt live up to the hype for me. dont let that deter you though, the space is fantastic, family friendly, and very comfortable.