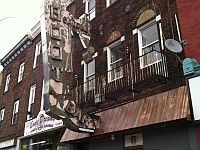 Reviewed by mildlybitter75 from Pennsylvania

3.61/5  rDev -4.7%
vibe: 5 | quality: 3 | service: 3.5 | selection: 3.75 | food: 4
I love the boot and saddle! One of the best venues in the city! Great place to see a show, drink and eat some decent bar food. The help is pretty cool, the place is a true dive without being or catering to the hipster d-bag crowd. A few months ago I was semi vegetarian and I got the vegan hot dog here! Man, it was better than most meat dogs. For drinks don't bother with liqueur the drinks are weak as hell! They have some cheap cans you can drink on the cheap, not too big into their draft list. All in all a great dive to see a show in.
Oct 25, 2015

Surprised to find it here, I went there the other night with the wife after a drink at the nearby Devil's Den. It was pretty empty at 1am on a Saturday night... but the 80's retro music was still going strong (Depeche Mode, The Smiths). The atmosphere is Fishtown-meets-Iowa with some good beer on tap:

I thought $8,50 for my rye neat was about two bucks too expensive... and the service is not that great. That hipster indifference and "fuck you" faces... I'm getting used to it in PHL... But then on a second visit we had the best table service ever.

Reviewed by Shandycan from Pennsylvania

4/5  rDev +5.5%
My rating as a music venue is even higher- great intimate setting to see an indie rock-type band. Beer menu was somewhat small, but well rounded, and included a location specific beer (Yards Petty's Island- a nitro cream ale) which was fantastic, and probably even better on a hot summer's day. Food menu looked pretty tasty, will have to test that out next time I stop in for a show.
Oct 27, 2014
Boot & Saddle in Philadelphia, PA
Place rating: 3.79 out of 5 with 3 ratings