Train To Mars
Get Radical 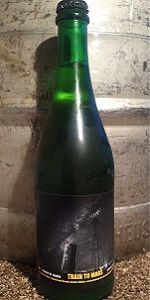 View: Beers
Reviews: 21 | Ratings: 63 | Log in to view all ratings and sort
Reviews by LanceH:

a potentially polarizing beer here, but i loved it. a big hoppy saison, yeasty and different. these days its hard to find a new flavor in a saison, they all seem to blend together, everyone is making one, and a lot of them arent that good. this i love because the yeast is so interesting and different. nevermind a bit of green bottle belgian skunk to the nose, its not there at all in the flavor. real tall white lace head with some sediment speckled through it over a honey colored brew. it seems stronger than it is alcohol wise, its pretty thick in body, weighty even, and there is a little harshness to it, maybe from the grain hulls or something, but i would not have guessed it was right at 5% abv. i really like the rustic grain character here, a heavy wheat malt base, but it has a different vibe than other wheat malts i am used to, its more ancient, less refined, rawer, bigger, more flavorful. the way a carrot or something from your own garden tastes compared to one from the grocery store, its that kind of thing. carbonation is awesome, and so is the feel of this. its huge, creamy and expanding in the mouth. not quite as funked out as i thought it might be, but i appreciate this yeasts subtle spice profile and esters. a beer i really dug, but i can see others writing it off as spoiled from the green glass. i think not.

750ml green bottle purchased from Cave à Bulles in Paris. Simon, the owner of Cave à Bulles is also involved in the brewing of this beer. My bottle says 5.5% ABV, but he said that that's a misprint, and it's actually only 5%.

Pours a clear and vibrant golden colour, with a frothy, firm head of white. Lacing is superb, leaving lovely messy streaks and pattern down the glass. Carbonation is very fine, and although there's a lightness to the body, the bubbles linger when tilted. Looks very nice. Very refined and sophisticated.

Nose is great. Big on both the funk and the hops. Initial whiff gives huge, pungent, almost gueuze-like funkiness and a little light-struck skunk from the green bottle (which I'll admit actually doesn't hurt this beer). A little sulphur comes through, but it works in with the funk nicely. But as well as all of this rustic organicness, you have the hops, which are bright and powerful. Mosaic, Aramis and Simcoe are used in this, and I think the Aramis is most noticeable, giving a clean, slightly herbal but fresh green character to the beer. It works well with the funky saison base, giving it a brightness to complement the earthiness of the yeast. Great stuff.

Taste is much, much more simple, which is a shame, but it's perhaps only disappointing because the nose was so good. Clean entry with a thin lagery-grain character like a southern German pils. The hops come through fairly well, giving a crispness to the backbone of the beer. Funk is much more subdued, and the body is very light, meaning that that rich, earthy character is very much curtailed here. Bitterness is restrained throughout, but persists longer than the rest of the flavours, meaning it has quite a bite of hops in the aftertaste.

Feel is crisp and light. It makes it extremely drinkable, even as many of the contrasting flavours seek to overwhelm the senses.

This is great stuff. It's extremely interesting, which always gets me, and it's a lovely weaving together of hops and funk. The aroma is magnificent, which makes everything else seem a little pale by comparison, but altogether it's really wonderful stuff.

Overall, if I could take western south dakotas Prairie, and drink it - dry grass and all, it would be this beer. Interesting feat for sure.

The Smokey yeast is restrained yet prevalent. This is okay. Definative saisons character but still forgettable. Something needs to bang harder here. Derp.

Got on tap. Pours a light pale burnt orange. One finger pillowy head with little retention. Solid lacing. Some sediment. Smell is a grassy bread yeast with some fruit in the back trying to break out. A very spicey saison but with a clear hop profile. Peel is light and tart. Soft carbonation. Solid saison here.

Pours into a stemmed glass a slight hazed golden with a large blooming bone white head that settles very slowly into a frothy mass.A bit of skunk and cork hits up front in the nose then a nice citric/coriander spice and iron tinge comes thru after a minute or two.Bone dry and slightly chalky on the palate with with herbal and hay coming thru in the finish.As I drink more there is a faint doughy sweetness that comes thru but it's still mainly a dryer palate.Highly drinkable,a good spring and summer outdoor beer.

It pours a hazy yellow, dark yellow, great head of foam and lacing.

Barely medium bodied with lively but not over the top carbonation.

Such a great beer!

Even with the named hop varieties, I still say this is an excellent traditonal saison. Appearance is likewise great with a huge frothy head and some lace. Aroma is very good with some pungency, yeast, wet grain, fruit. Perfect body. Superb drinking beer to boot. And I have one more bottle. Ha-HA!

Picked this up at a great little beer store in Arlon, Belgium, Miorge Mihoublon. Hazy amber-yellow pour with a foamy two finger pure white head with great retention and lacing. Wonderful citrusy, complex nose with hints of lemon, white pepper, coriander, white grape skins, lemon zest, grain, grass, and some subtle funk. The taste follows suit with tons of citrusy hops along with hints of lemon zest, grass, grapefruit, white pepper, brown sugar, grain, honey, and white grape skins. The mouthfeel is amazing with crisp and refreshing fizzy carbonation, perfect balance, and an awesome bittersweet finish. Overall, this is an amazing example of what I think of with a Saison. Crisp, refreshing, balanced, and extremely drinkable. And this is so full of flavor it's crazy. Highly recommended!