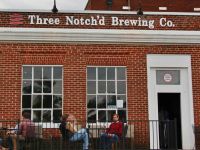 Reviewed by shockwavecs from Maryland

5/5  rDev +24.1%
vibe: 5 | quality: 5 | service: 5 | selection: 5
Great place to do a sour hour. Also noticed a birthday party going on in the room attached. Cool games to play while you do a flight of beer. Atmosphere all around during happy hour is great. Large natural lighting helps the look/feel. Great!
Mar 06, 2018
Rated: 4 by Cpmitchno1 from Virginia

Reviewed by cbbjr from District of Columbia

3.81/5  rDev -5.5%
vibe: 2.5 | quality: 4 | service: 4 | selection: 4
Pretty solid spot. The last time I was there they had 12 beers on tap, around half of which were IPAs, DIPAs, or PAs. They also make a very good brown ale (I'm generally not a fan) and coffee stout. They sell a few snacks, and it looks like you could bring in your own food. They have several board games you can play and the place is small but pretty family friendly. Service has been fast both times I have been, including one day with a UVA-Duke basketball game on TV and a full house.
Dec 30, 2016

Reviewed by Dave_Treat from Virginia

Reviewed by LaneMeyer from California

Reviewed by JMUbrewz from Virginia

4/5  rDev -0.7%
Awesome place to hang out and grab a beer in Charlottesville. Most of the beers are pretty mediocre in my opinion. I do like the Jack's Java Expresso Stout, and the IPA's are fine, but not exactly memorable. For the most part though, the beers seem to be average (Citra Wheat, Gray Ghost, Saison, Oatmeal Stout, Red Ale, etc.) I did love the Mosaic Imperial Red they made, but it was a one-off and it doesn't sound like they're planning on brewing it again (it was also a homebrewer's recipe that won a competition Three Notch'd was sponsoring.) I will say, the C'ville beers seem to be better than the small batch stuff that is being made at the new brewpub in Harrisonburg, but the core beers are still pretty average.
Aug 21, 2014
Rated: 4 by HookemHoos from Virginia

Reviewed by SportsandJorts from Virginia

Quality: I got to try a good amount of the beers they had on tap. they had no bombs and some pretty tasty beers

Service: just a couple of bartenders but they seemed to be handling the slightly crowded night pretty well

Selection: in the few months I have known the brewery they have made some serious progress. both in terms of the variety and amount on tap. I hope they continue this trend cause they have been putting some good taplists up

Overall: This brewery is already a good hangout with good beer. and they seem to be getting even better quickly. Definitely a place to keep an eye on.