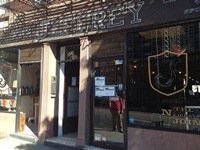 Fun place, but crowded on a Saturday afternoon. Both indoor and outdoor seating. Service was excellent even with how busy is was. Good beer selection and food to match. Will be back!

Busy crowded bar with good tunes. Twenty plus taps, many local or New York breweries. Despite the the crowd, service was very good and the bartender knowledgeable. Did not have any food. Would definitely return.

Awesome craft beer spot in the shadow of the queensboro bridge. 30 drafts and a bunch of cans. Lots of cool draft options as a result of mini-tap takeovers they do periodically. Good variety of beers, knowledgable and friendly staff, and a great looking menu (I didn't eat). A NYC must-stop for the serious BeerAdvocate or enthusiast

Cool vibe, great selection, about eight other half beers on tap. The bartender was nice but three times the guy asked what beer I wanted and forgot to pour it. If it happened once i would just laugh it off but it kept happening and got pretty frustrating.

I saw a beer just came in. I called in the evening to confirm. They confirmed. I said I was coming for lunch the next day and asked if they would have some. They confirmed. It's far away. I went there for lunch. They could not serve the beer they confirmed the night before. Waitress said "the line was broken."

Jeffrey's was our first stop while in the city and it was a great start. We arrived in the late afternoon, it wasn't crowded and the bartender was very accommodating, friendly, knowledgeable and Irish. The bar area in the front where we sat is a little tight but adequate. There is more space in the back and outside, but I would consider it not too large. We had a very nice pannini and unique and delicious beet pickled deviled eggs (6 halves). There were about 20 or so beers on tap plus bottles. Many were unknown to us, with a number of New York breweries as well as nationwide breweries. We liked the ambience and planned on returning. So the next night was stopped by, but it was so crowded we could hardly get in the door, so sadly we left. This place is worth the effort, but I suggest getting there early.

Loved this place. UES is not a neighborhood we go to often but we often struggle to find a great spot. Great tap list, some nice snacks. Service was good despite the staff losing a server to illness right after we got there. A must do if you are nearby.

Great new bar in the Neighborhood. They have a very good selection of beers at one bar, and then if you loop around within the same establishment, there is a cocktail bar that is just as outstanding.

Comforting atmosphere, great selection of beer, and worth the trip. Went there on a snowy Saturday afternoon with buds, and again on a date. They had the standard Victory Prima Pils to wash your palette or Ballast Point IPA if you want to kick it up a notch.

The only downside is the space is a bit small and a bit tight, but then again we are talking about NYC.

A friend of mine lives not too far from The Jeffrey and keeps telling me about all the good beer on tap there, so I stopped by on a Thursday evening at around 5pm.

It is a cool space, in an unlikely location right across from the Queensboro Bridge (no views, though). This is the Upper East Side but the shitty part of it, so it's nice to have a good beer bar around. Very gastropubby inside: warmth, brick, wood, dim lights. A very narrow hallway behind the bar opens into a limited dining area out back, which is also connected to the cocktail bar on the other side. I like the architecture/layout here.

30 taps between front and back, good stuff for sure. They had a Captain Lawrence event so a lot of the taps were from there, including Frost Bite, Smoke from the Oak, Golden Delicious. Obscure brews from here and over the pond such as Hof Ten Dormal, Beer Geek Bacon, Schlenkerla Eiche, Del Ducato Baciani, Voodoo Gran Met...

Very expensive, great bartender with lovely smile and beer knowledge. This place is good. So much better than Alewife!

Vibe: I visited this new craft beer bar on a Monday afternoon. It's located in East Midtown right next to the Queensboro Bridge, which is an area that doesn’t have much in the way of good bars for craft beers. It is the sister bar of Alewife in Long Island City. There are two doors from the street—one for the main bar and one for an espresso/cocktail bar. The two bars meet at the back of the place, which contains a seating area and an outside patio. The main bar is fabricated from copper.

Quality: Beers were served at the proper temperature using a variety of glassware.

Service: I sat at the bar so service was quick and the bartender was very friendly.

Selection: The place has a total of 30 beers on-tap: 20 in the main bar and 10 in the espresso/cocktail bar in the other room. One beer was available on cask.

Food: I tried the roast beef sandwich and it came out on toasted sourdough bread, similar to what you would get with a panini. The pickles served as an accompaniment were very tasty.

The place looks and feels like a typical local Irish pub but not an American version of it, rather the real thing. The place is not that large but it is well light and have some nice windows letting in natural light (though the street is nothing special to look at with the bridge entrance being right in front of it. It was not too busy when we visited on a Monday early afternoon so I cannot comment on the crowd but the music was quiet in the background making it easy to have a conversation. Very relaxed feeling.

The beers were well poured with proper amounts of head and served at the proper temperature. Appropriate glassware was used for the different style of beer. The beers smelled and tasted very fresh and considering the place opened recently I would expect them to be.

The bartender was very friendly, pleasant, attentive, and knowledgeable about the beers. The owner is also a real stand up guy - we have tried most of his other ventures in NYC including Rattle N Hum when it first opened and Alewife. Since we visited at since a non-busy time and the owner was there, we were treated to a couple of complementary beers on the house for supporting his places (Cantillon Classic Gueze and Saint Somewhere Pays Du Soliel).

The selection is pretty good with a good number of different styles on tap including Gose, a couple of different IPA/DIPAs, and stouts. There was also a decent sized bottle list with some very nice bottles available.

We had the sandwiches when we visited at lunchtime and they were pretty good - both the roast beef and the rueben. They came with some delicious pickles which were made in house. Unfortunately they did not have any of the beef jerky available which I was looking forward to trying.

Prices were right on par with other spots in the neighborhood and I consider them to be reasonable.