Map Of The Sun
The Rare Barrel 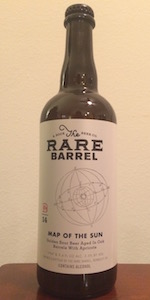 One of the best fruit apricot sours around.

The beer has a great tart quality up front, then some preserved and fruit apricot flavor, cut with that tart and funk later in the beer. The analogies to Fou Foune and West Ashley are real.

this is a barrel aged apricot sour, really cool beer. great use of fruit, super ripe and bright, not overly sweet or dominant, still a sour blonde before its a fruit beer, which i like. the neutral oak on it is cool too, it doesnt put booze flavors into the beer, but lets the beer shine in its own right. pretty clear for the style, the beer is also really light in color, yellow golden looking with a thin white head. the apricot is an accent note in smell and taste to the lacto pucker that leans towards lemon. malt base is light, but the oak presence is not. its tempered some of the acidity but the beer is still very sour, its helped smooth the mouthfeel too, even though carbonation is still solid. the fruit comes out the most in the finish right before the drying sourness and the oak tannins. its fuzzy and ripe and definitely apricot. all of the rare barrel beer i have had has been incredible so far, but behind egregious, this might be my favorite. very true to the fruit and the high level acidity doesnt degrade it at all.

Taste is super fruity, dry, mild oak intrusions. This, cascade apricot and filmishmish make me not miss getting Fou Fune the last two years. Well, not too much, but they are seriously plenty good substitutes. If you love your apricots and sour on full blast, this is your jam.

A: Golden orange with some bright gold around the edges - light haze but mostly clear - pours with a small white head, fades rapidly to a virtually no cap, not much lacing

S: Straight-up sour, with some acidity, some lactic notes, and some funk - sharp tartness - fleshy apricots with some juice, sour apricots -oak - some light sweetness and pale malts at the base

T: Wonderfully sour and tart, tons of apricot - mostly sharp and acidic sour, with some sharp tartness, but some funkier lactic notes as well - some general funk - undercurrents of oak - lingering sour - lots of apricot flavor, with some under-ripe apricot and some apricot juice - some light sweetness, neutral pale malts at the base

O: Getting lost on the sun sounds good to me

The apricot rounds out The Rare Barrel's usual golden sour base in a very nice way. This is one of the best Rare Barrel beers I've had, and I look forward to drinking more.

This beer is drinking absolutely spectacular right now. While it has lost some of the Apricot flavor it had when fresh, it still has plenty. In it's place has developed a very funk, cheese like character that is one of the closest to lambic I have had in an AWA.

had this a few times, always great. great yellow color. nose and taste are apricot. one of the better apricot brews can hang w west ashley and fou. yum yum yum

Great beer. Good apricot flavor, perfect balance of tartness, good mouthfeel. My only criticism is that it feels lighter and less complex than other apricot sours I've had. I'd definitely put West Ashley, fou foune, or filmishmish above this beer, but that doesn't mean that I didn't really enjoy this one as well.