Arrows Of Neon
The Rare Barrel 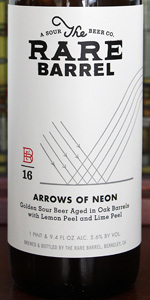 Notes: Arrows of Neon is a Berkliner weisse aged in oak barrels with lemon peels and lime peels. This lightly tart and quite crushable sour displays bright notes of citrus zest and clocks in at a sessionable.
View: More Beers | Place Reviews
Recent ratings and reviews. | Log in to view more ratings + sorting options.
4.14 by NorCalYeti from California on Dec 04, 2021

Nose of lemon and lime.

Taste of lemon and lime with a slight citrus pith finish.

Good feel, but hoped for just a bit more fulfillment.

Another review from a trip to Rare Barrel after the dipa fest, February 2017. Was surprised this was a berliner weisse. Did not know when drinking it.

Pours a slightly darker SRM than I am used to for a berliner, this one leans close to amber in color. Thin white head, 1/5" deep. Has that 7up feeling to it, commensurate with the commercial tug job, this one does push plenty of lemon lime notes. Again, I don't get any funk notes from Rare Barrel, like ever. Its just a clean lacto sour power hour. Not really big on funky notes with a berliner weisse anyways. Its plenty acidic, like, I don't think you'll ever get scurvy drinking this beer. So much citric acid, but I'm also not some pussy who can't handle a little bit of acidity without making a big deal of it. Its a fun drink. Its really sour, so there's that. Its kind of like Rare Barrel's usual wild ale meets berliner kind of end result.

EDIT: Had it out the bottle in Sep 21 and the appearance was more golden than amber leaning. Previous appearance score was 3.25, upping it to 3.5 now.


4 by PhineasMcClintock from Massachusetts on May 11, 2019

Thanks to eyebereej for sending this bottle! Reviewed from (long-standing) notes. Poured from a 750mL bottle into an El Catador Barrel-Aged glass.

A: Hazy gold with a good amount of active carbonation. Forms a thin white head though it fades essentially immediately.

T: Lactic tart and lemon juicy citric acid. Moderate funk on the tongue again - cheese and feet. White vinous tannins mix with the Lacto funk. Citrus pith and juice, and a light cracker malt body underneath the oak tannins. But the juicy bitter citrus is the big player here - almost like a key lime. Dry and tart in the hang.

M: A light body and almost no alcohol flavors at all. Carbonation sensation seems a bit on the low side.

O: Tasty and easy to drink. Nice tartness but not overly sour or acidic, and a nice citrus fruit presence for sure.

Another great sour from Rare Barrel. The citrus zest and tart flavors blend well with the barrel aging characteristics, not earth shattering, but solid and recommended

Bomber with no date except number 16, which probably means its from 2016 sometime. This beer looks good with a hazy light yellow color and a fizzy head when poured that dissipates quicly. No lacing when consumed either. The smell is delightful: funk, lime, lemon, slight vineous, cucumber, vanilla. The taste is right up my ally with that nice tart mouth punch followed by lemon-lime and ending with some funk and barrel notes! The feel is light and crushable. Overall i dig this beer and i am surprised by the low rates, maybe aging this is what it needed but I don't know because I hadn't had it fresh!

A: Lots of lime and lemon, bright citrus with a moderate sourness and light oak aromas.

A: Bright golden color, totally clear with a thin uniform white head that quickly gives way to a sheen and thin ring around the glass.

T: Lots of zesty lemons and light limes, quite citrusy with faint oak, coupled with a moderate sourness

M: Medium light bodied with moderate carbonation. The beer has a light, but pleasing acidity.

O: Tasty; the beer has lots of citrus notes, coupled with a moderate acidity and light white white character. The beer is quite refreshing and easy to drink.