Fore Ever More
The Rare Barrel 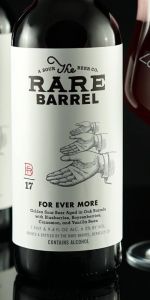 Reviewed by rand from California

Beautiful rose-pink color, soda-like effervescence. The nose is compelling aromas of blueberry pie, yeasty crust and all. Flavors are berry-forward, with a tart but not overly sour undertone. Oaky and dry, closes with a short finish with little residuals between sips.

Refreshing and easy to drink but was expecting more. Cinnamon and vanilla bean are barely detectable.

4.5/5  rDev +3.7%
look: 4.5 | smell: 4.5 | taste: 4.5 | feel: 4.5 | overall: 4.5
A: Poured into a Duvel tulip to a deep red beer topped by a dense and slightly rocky finger and a half of pinkish head which fades slowly to a collar round the edge of the glass with minimal lacing
S: Smells of sour berries and vanilla with a hint of cinnamon. Slight oak as well.
T: Taste is a nice sour boysenberry note with a touch of oak, smooth vanilla and some hints of cinnamon help to round things out. Really pleasant amount of sourness throughout. On the swallow there's more sour berries, oak, vanilla, and a little more cinnamon.
M: The beer has a body which is slightly syrupy while being on the lighter end of mediumk. Carbonation is adequate and somewhat effervescent while the beer has a drying finish due to the acidity.
O: Overall this is a really awesome beer. It has a really nice amount of flavor and complexity which makes it a joy to drink, The cinnamon is subtle and if it wasn't on the label I'd probably miss it or ignore the flavor note. I'd like to see this one come back around as it's a really outstanding example of the style.

A: Pours a deep cranberry color with a thin, active, cap of pink foam that quickly disappeared.
S: Bbeautiful bouquet of berry, vanilla, and cinnamon combined with musty funk and bright acidity. Flavors smell reminiscent of berry pie.
T: Follows the nose with flavors of mixed berry up front, creamy vanilla, and a kiss of cinnamon. The finish has notes of grape juice, fruit punch, lemon zest and bright acid. The aftertaste has some earthy bramble patch flavors of fresh berries mixed with musty spice.
M: Medium body, sweet and slightly sticky mouthfeel balanced by sharp acidity with some gritty tannins. A bit sharp and rough around the edges acid-wise. Fizzy but smooth carbonation.
O: Great combination of berries accentuated by the vanilla and cinnamon. The flavor wasn’t as pie-like as the nose because the acidity, but a delicious beer nonetheless.

4.51/5  rDev +3.9%
look: 4.25 | smell: 4.5 | taste: 4.5 | feel: 4.25 | overall: 4.75
one of the best beers i have ever had from rare barrel, and after a couple of overly acidic cellar duds, this was a welcomed winner from these guys, who maintain their hype status somehow despite what i perceive to be inconsistencies in quality across their many beers. this is way up there for me though, a neat sour beer stained purple with heaps of fruit and spiced brilliantly. rarely does a spiced sour sound appealing to me, and i was even debating not getting this one, but i am so glad i did. it has a pie aspect to it, the cinnamon and vanilla both very forward, especially in the nose, and they bring out the jammier side of the blueberries and boysenberries, sweet and concentrated, with a blackberry jam component to it, all coming together brilliantly. the vanilla makes the beer pretty sweet for a flash, but the acidity comes right in and disintegrates it, finishing the beer dry, puckery, and naturally fruity, blueberries in front of boysenberries for me. the layers with the spice and the berries are amazing, there is a ton of wood here, red wine and tannic aspects, but a big smooth body uncommon in sour beer, especially this sour. unlike anything i have ever had, and of the finest quality. i wish all the rare barrel stuff was this good! on tap at goed zuur, who is absolutely killing it with their draft lineup these days!

edit: nearly equally compelling from the bottle, a couple of years old now or close to it, not as acidic and caustic as some of the other rare barrel stuff has become over time either, which i am thankful for, more vanilla than ever now but its still not sweet, cinnamon comes on late and gives it an autumnal warmth, and there is a lot of oak here too. impressive depth of flavor, maybe a little less dramatic than the draft was, but a wonderful beer. one of their best!

Rated by rodmanfor3 from Vermont

Familiar sour base paired with fruits and just the right about of cinnamon. A beer worthy of its price tag.

Reviewed by Stillyman11 from California

Reviewed by dogleg_left from North Carolina

Cinnamon stick and blueberry jam dance with oak and and earth. Let this warm and be rewarded.

Reminds me of a fresh wild blueberry pie made from nothing but berry and dough. There is a subtle sweetness, tartness, and funk that blend perfecty together.

The vanilla lends a warming bourbon quality to a somewhat flat finish. Unfortunately the bottle arrived harmed. The wax top arrived nicked at the bottle cap. The bottle gave a quarter of its liquid to the box and with it some of its carbonation. Id like imagine that the appearance and feel scores would have been near perfect. Wonderful even under duress. Wish I could have cellared this one, but it required immediate consumption. The things we have to do!