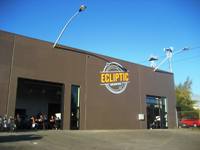 i have liked these guys for seemingly as long as i can remember and have been drinking their beer for years as a big fan, so it was amazing to finally make it to the brewery and spend some time, drink some beers, have a meal, just a great experience! they have what i assume to be a changed setup due to the virus, picnic tables all over what is a praking lot under normal conditions i would suspect, well spaced out, and the inside area was pretty much closed except for the restrooms, but it looks like a nice bar area. frankly, we were happy to get a table in the shade with so much space, the walk up service and pickup was great, the little buzzers worked well, they had an app or scan code based menu and ordering system which was easy to navigate, and we appreciated them looking after our safety so well. the outside area was big and cool, they had good tunes playing, and the beers! oh boy the beers! we had an epic coconut vanilla hazy ipa, a really tasty corn and honey lager, and an italian pils they did in collaboration with ruse, all of which were sensational, they do not make a bad beer here. the list was long and i wished i had more time to try them all, but you cannot go wrong. i had a salmon burger for lunch and it was awesome, my wife liked her food too, and everyone was happy here. the beers speak for themselves, but the taproom experience, even in virus times, was still memorable. a highlight from our oregon trip for sure and i cannot wait to come back here!

Had lunch yesterday in their spacious, covered, outdoor seating area. Very dog and baby friendly place. Enjoyed a fresh hop pale ale and a delicious brisket sandwich. Beer selection was good, service was excellent, and the food was great.

This recent addition to the Beervana brewery scene is the child of Oregon brewing icon John Harris, a lover of brewing and astronomy. The name refers to the Earth's orbit around the sun. Located across the river, and a 5-minute walk from Stormbreaker (See Review), Ecliptic sits in a large warehouse-type building; there is a roomy patio and a roomy dining area. There is a separate bar area, where the stars come out - the "stars" being the tasty brews. There were about a dozen taps available. I enjoyed their Orbiter IPA and the Capella Porter. (Harris created the recipe for Deschute's Black Butte Porter, so you be pleased. I was.)

A large concrete industrial warehouse brewery opened by the legendary John Harris in 2013.

Pros:
- Best food I've ever had at a brewery. The beet melt with granny smith apples and goat cheddar is an excellent combination of flavors and textures.
- Kid-friendly dining separated from the bar with reasonable kids options on the menu.
- A nice open patio with views of the Fremont Bridge on clear days. Thankfully, the barbed wire fence is gone.

Cons:
- The beer is second tier for Portland. Lots of generic IPAs that are perfectly drinkable, but nothing that will blow you away. My go-to is Pegasus, an ESB originally brewed to commemorate Horse Brass' 38th anniversary.

Have never been all that greatly impressed by the beers I've had from Ecliptic, but have been told that the selection at the brewery/pub is more interesting and of higher quality. Based on my visit today, hmmmm... not so much.

Facility wise, this place is impressive. They have a large, very nice outside patio area, and the converted warehouse space inside is pretty impressive as well. The inside dining area is clean, airy and sizeable. There's also a fare size bar area over to the right, in the back as well. No doubt about it, this is pretty nice spot to hang out and have a beer or three.

One of the things I've also heard, is that the food at Ecliptic is pretty good. That certainly looked to be true, and I was impressed with the sweet and spicy chicken drumsticks I ordered. Service was also pretty decent. Orders came quickly, and folks working here were friendly and pretty personable as well. So now we come to the beer...

On this particular day, they had 10 different beers on tap. The menu listed several additional beers that were slated to go on tap over the next week, so I think they typically have more than the 10 beers I saw on tap today. Anyway, I ended getting a 6 beer sampler, for I believe $11. In terms of quality, I really liked the pils and the currant flavored tripel. The IPA was decent as well, but not what I would call a stand out in this part of the world. The TIPA was OK, but wasn't the sort beer I'd ever want to get a pint or tulip of. It was definitely on the boozy side (no surprise, given the 12% abv.) The bartender was really proud of the porter here, which he noted has recently taken a gold medal at some national competition. I guess there's no accounting for taste, as the beer struck me as pretty simple and one dimensional. It was light on the palate, with a considerable roasted malt and coffee aroma/flavor. The Oort RIS was equally unimpressive.

Shrug. I had an OK time here, but after may visit to the Breakside facility out in Milwaukie, Eclipse was something of a let down. Pretty sure I won't need to come back here any time soon.

John Harris' brainchild is a must visit in my opinion. Big place, great beers and food. Staff is pretty friendly, but overall the place may not be the best for kids, if that matters to you (currently is painfully important for me), other than some coloring.

The burgers are phenomenal. Perhaps some of the best in the city. Come for burger Tuesday where the special (faro patty optional for vegetarians), side, and beer are only $15. Excellent quality brews with a decent range, but of course mostly hop focused. Cheers.

*Side note: it's funny to see this pic of Ecliptic, as it's surrounded a large patio, tables, more parking, a grain silo, and multi level apt/condo buildings in the background now. My, how quickly things have changed...

Pretty cool place that was a bit off the beaten path (for a tourist). Much bigger than I expected but still maintained a good vibe.

The beer was definitely above average but nothing stood out (I sampled most of the 8 they had on tap). With so many great beer options in PDX, it's hard to recommend this brewery, especially given the location, but if you are there for a few days and are looking for an interesting place, it is worth a visit.