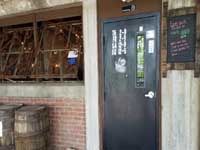 As this was a cover visit, they were just offering cans to go...I got a few options and found their hazy IPA to be on point, well priced for value and quite tasty. Friendly and knowledgable woman behind the register is always a plus.

Tables in doors in at least 2 separate rooms and ample space outside on the front deck/old loading dock area.

Worth a visit if in the area.

Reviewed by DirtyPenny from Massachusetts

Great ambiance. Lower light and lots of space. Plenty of beers on tap. Walls are decorated with malt sacks and barrel tops. Very pubby feel. Grab a pretzel and a Penumbra, Ramshackle or Trains Best if you want something sessionable. Usually plenty of places to plop down but I tend to drop in on Saturdays around opening. Tends to be a nice crowd (but not crowded) within a few hours. Could it be different Saturday night? Could be! Staff always very friendly. Plenty of parking.

4.08/5  rDev -1%
vibe: 4 | quality: 4.25 | service: 4 | selection: 4
This brewery is in the back of an old industrial building near the center of Bristol. The taproom is split between a bar room and a room with tables and chairs. It is well designed with a large opening in the brick wall that separates the spaces which allows you to look into the brewing area from either space. One side is all windows looking out onto a covered porch. Unfortunately there is no beer allowed outside. Great vibe even on a weekday afternoon. I liked the fact that you can find a seat away from the bar where you can work on your laptop, or whatever. I had a deliciously smokey Scottish Ale, appropriately named Smokey Moor, which is brewed with 6 different malts. The addition of the smoked Scottish peat malt accounts for the distinct taste. There seemed to be 7-8 beers available on tap. I wish I had time to sample more but I had to get going. I had a great hot dog from Don's Hot Dog food truck in the parking lot to tide me over until dinner. This brewery is a bit tricky to find but worth searching out, and I will return when I have more time to enjoy it's offerings.
Jan 28, 2018
Rated: 3.72 by RickyBfromCT from Connecticut

Reviewed by mccrackrlm from Connecticut

Reviewed by ale2thechief from Connecticut

4.26/5  rDev +3.4%
vibe: 4.75 | quality: 4.5 | service: 4 | selection: 4
This is like hanging at a friends basement bar with a bunch of friends and a kegerator. This is a wide open space in an old factory building. No food service but you can bring your own or eat from the food truck of the night parked outside their entrance. They have 5 beers of their own design on tap. Growler fills, flights or you can have a pint and stay for a while.
Aug 19, 2015
Rated: 3.92 by JAck199 from New Jersey

Rated by Manjas from Connecticut

Rated by I-PEE-ALE from Connecticut

Rated by SenatorSpaceman from Connecticut

Reviewed by swierczt from Connecticut

2.99/5  rDev -27.4%
vibe: 4 | quality: 3 | service: 2.75 | selection: 2.75
Place was busy on a Friday evening. Cool industrial location with a lot of space, but still overcrowded, disorganized and chaotic. Thought it was strange that a bunch of kids were running around bumping into people. Couldn't really relax. Waited about 15 minutes in line to order a flight which normally consists of 5 beers, but only 4 available (2 of which I had already tried). Beer selection was disappointing. There was no where to sit or at least put my flight down. I had to squeeze into a corner to try to get out of the way. After trying the flight, it took another 30 minutes in line to get a growler fill. I saw a couple of people come in carrying growlers and simply left after seeing the line. Maybe it would be more efficient during busy periods to have a growler fill line separate from the flights, pints, and t shirts that people were purchasing - just a thought. I was not in a hurry however, after spending the majority of my time waiting in line, getting bumped by kids, and moving so people could get around me at this brewery - I will likely not return.
Dec 31, 2014
Rated: 4.28 by johnnyboy6 from Connecticut

Reviewed by Rideguy64 from Massachusetts

4.25/5  rDev +3.2%
A relative newcomer to the beer scene. I was glad that I stopped in to this establishment. Great vibe from the people that were there. Located in the rear of a factory. Track them down and give them a try. That have some excellent beers on tap.
Dec 07, 2014
Rated: 3.5 by LoveStout from New York