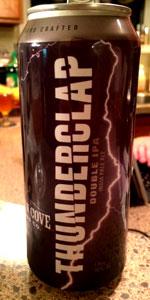 Golden color with slightly Amber highlights. A chunky, Rocky and whipped Appearance to the foam, Christmas check chunks of sticky lace all over.

The hops taste much like the aroma but with a deep, earthy, mildly bitter additions to the taste and effect. Pineapple, kiwi, cucumber, orange citrus and a boozy style heat to the finish. Complexity is medium to high. Compromising drinkability, but it's a sipper anyway.

A medium to full body, crazy smooth for the style, almost a "frappe" IPA.

Served in a becher-style glass, it was a medium-gold hue, with a touch of haze and aggressive carbo. Head was a 1/4" layer of fine, white foam, with decent lacing. Nose was a mix of toasty malt and rindy hops. Body was medium, and it was pretty light on the prickle, despite all the carbo.

Taste had a bit of caramel and more toasty malt, with a touch of sweetness. Then there were citrus notes (tangerine and grapefruit), with piney, pithy action giving it some bitterness. Finished somewhat on the dry side. Pretty good overall, though I would have liked more sweetness and hopping, with a cut back on the bitterness. Prosit!

Pours a golden straw color, a little cloudy. Has a nice honey aroma, citrusy but not in a hoppy way. Nicely balanced, more malty than hoppy, reminds me of Great Lakes "Lake Erie Monster" but a little tamer. Has a nice honey-like sweetness to it. Very good carbonation, almost creamy. Overall a very nice DIPA, not a hop bomb, but I really like it.

Pours a very cloudy dark gold color with a very frothy 2 finger white head that settles down into a silk blanket. Gotta say I like the cloudy look with the darkness.

Aroma is light but sweetly tropical, mixed with a little maltiness and alcohol

Taste is surprisingly fruity up front with notes of orange blossom most prominently. This is backed my a moderate caramel malt flavor but also some other grainy flavors that actually blend well with the hops. There is an alcohol burn that kicks end near the finish but it is tempered well.

Feel is slightly sticky, a little heavy but balanced in this regard. A little creamy due to smoothing adjuncts.

I'm not a big fan of alcohol-burn DIPAs but I feel like they won me over on this one. The sweet backbone blends very well with the tropical hops. I don't reach for DIPAs as often but I would consider this one again.

T: orange and lime up front; sold malt backbone throughout with some sweetness in the middle; mild bitterness at the end that increased to moderate in the aftertaste;

O: good, but not memorable;

The pour is a cloudy orange color for sure with a modest and lingering white head. Some lacing.

The aroma brings out a white bread character before the fruity hops kick in. And those fruity hops remind me of pear and/or orange,

I still get the initial bready sensation in the taste but it is quick usurped by the fruity, juicy hops. It has a fruity finale. But while this is likable it does not make the bar of of a lot of these other New England IPA's that re so popular today.

Can poured into a pilsener glass

Low sudsing, get a taste of alcohol on the first sip but none thereafter

Pours a hazy straw/slightly darker color with a one finger head.

Aroma: lemon zest (can says lime zest, but im getting lemon), hints of strawberry (as can suggests), melon. mostly fruit flavors, faint herbal/floral quality to it as well.

Taste: mild to moderate bitterness, im getting melon, grapefruit, faint lemon. a lot of other things going that I can't pin down. interesting taste to this beer, but its a tad too bitter for my tastes.

Can from the Lazy Dog.
Slightly hazy faint golden color with a huge frothy rocky white head that persists forever. Citrus and light pine with faint bready malt underneath. Grassy sweet bread bits of alcohol in the flavor. Decent at best.

I figured the day would soon arrive that Hidden Cove would put out a double IPA, but I honestly didn't expect to see it so soon after the release of their APA, Compadre, and I certainly didn't expect to see it in cans! I actually had no clue they had an operational canning line, but since the 16 oz canned DIPA market is very competitive these days, it seems Kevin, Richard and co. have had to step up their game.

Pours an iced tea-like, hazy lightish-amber/orange color into my Hidden Cove pint glass. Head doesn't build up too terribly voluminously or actively, even with a harder pour. What I do get, however, retains very well with a finger-tall ring of slightly-off-white foam. Lace appears in sticky tiers as the head fades and as I sip.

This beer has a pretty unique nose and is surprisingly detailed, though if you're expecting a punch-in-the-face from the hop combo here, you'll be confused and/or let down. This beer utilizes Hallertau Blanc, Lemondrop and Belma hops, all three of which are fairly new-school and contain unique undertones. Between the three, I pick up honeydew melon, overripe strawberry, lemon candy, kiwi and light notes of passionfruit and starfruit. Honestly, there isn't anything that quite smells like this. There's a seemingly-stiff malt balance provided here as well, with some light toffee and bready/biscuity notes punching through as well. All this being said, I feel like this could probably be pushed a little more. What is there is nice but it just doesn't seem to jump out of the glass as much as I'd want it to.

Flavor is a bit more malty, with a punchy, slightly-piney and grapefruit laden bitter wash up front before transitioning to juicy, ripe melon and kiwi towards the middle. Rather striking and distracting caramel malt comes across towards the finish, which ends up a little slick and undefined. Wish there was more of that fruity melon/strawberry note there. This could seriously be a really extraordinary beer if it were dialed in more. I think the flavor is a bit too malty overall and could definitely use some balancing hop notes, most likely later additions and a heftier dry-hop schedule. It's also a little bit too hot, showing its nearly 9% ABV pretty handily. Kind of reminds me of Dogfish Head's 90 Minute in this sense.

If this beer were even a little more forward with all of its dynamic aromatic qualities, this would be one of the most unique hoppy beers on the market. As it stands, it falls short of the standard set by most of the modern NE breweries when it comes to this style and, more particularly, this format. I hope they re-work this to do better by it, because it has a good bit of potential. Just a bit unrefined.

Poured a light yellow from a 16 ounce can...not much of a head. The 8.8% alcohol was well hidden and the brew was easy to drink. I liked it..not loved, but there were no glaring weaknesses. I would probably buy again.

From a 16oz can, undated, served in an imperial pint/nonic.

Feel is no more than medium-bodied, decently carbonated, clean and drying. A little residual warming in the gullet.

Many thanks to SawDog505 for this can.

T - Vinous citrus from start to finish with some alcohol effervescence on the back end.

M - Medium body and gentle carbonation. Develops a nice resiny coating of hops in the mouth.

O - Balanced all the way through.

Poured into a 13 oz Weyerbacher tulip glass not sure when it was bottled. Pours a very cloudy dark yellow, with a two finger sticky white head that leaves loads of lace behind.

Mouthfeel is a little bigger than medium, enough carbonation, a little on the dry side, and drinkable enough.

Overall this is a odd little beer. The flavors just don't work with this beer. Not terrible, but for some reason I am not that impressed.

Pours hazy, orange-brown in color with 1/2 head. Taste is melon, toasted malt, and light orange. Medium heavy bodied, sweet, with low carbonation. Decent sipper. Had better in the style but worth a try.

12 oz pour on tap into a snifter

O: not a bad beer alcohol is well hidden I don't care for the perfumey tropical hops but it isn't a drain pour either

Served in a snifter at the Union Brewhouse in Weymouth.

Appearance: A one finger head was poured that reduced to a thin layer. It is a slightly hazy pale yellow orange color with goodclarity and vision of tiny bubbles coming up through the glass. Frothy lacing down the glass as the beer was drank.

Thunderclap from Hidden Cove Brewing Co.
Beer rating: 88 out of 100 with 63 ratings