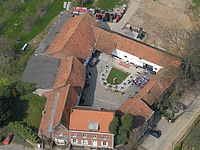 I have been to the Brouwerij Kerkom on 2 separate occasions; first time was with a small group in 1996 when they only made 1 beer. After a change of ownership in 1999 & an expanded beer range, we visited again on the 15th April 2001 with a much larger group during our Easter Trip. This is an archetypal rural Belgium Brewery, if ever there was one. Set in a gorgeous old farmhouse of the classic variety, in the province of Limburg, an unspoilt quiet area full of large swathes of agricultural land.

On its own near quiet crossroads, a cobbled courtyard is surrounded & totally encompassed on all four sides by a large House & two storey farm buildings, with the only access being via a brick arch.

Strictly speaking not really a Brewpub, but with the recent addition of a Brewery Tap & the fact that you have a very good chance of seeing the Brewery if here, it classes itself as one at times. The Brewery, original Sampling Café and the Brewery Tap all have the same address.

The original Brewery started in 1878, closed in 1968, then re-opened in 1988 with more modern equipment, changed ownership in 1999, and now has an accomplished, but still hard-to-find beer range.

There are two places to drink the beer here.

During our first visit in 1996, we were ushered into a fantastic old brown style Sampling Café in the main House building. It looked like it had altered little over the last 70, or so, years. Old tiled floors a stunning deep carved dark wood bar with equally splendid over-the-top fittings. Original decorations & light fittings as well as some antique pictures of the family & previous brewery adorned the walls. More like a museum than a Bar. This is the best place to drink the beer if possible. Only seats a few people though.

During our 2001 visit, we were shown the newly created Brewery Tap, which is in old unused parts of the farmyard buildings cleverly & sympathetically refurbished into a fair sized drinking area. This is more often used, because outside the Brewery Tap is a grassed area where there are Table & Chairs.

The three regular beers go under the name Bink, and were all from the bottle, draft beer was planned but not available during our visit. In addition, 2 other seasonal beers may be available depending on stock & the time of year. All are extremely good. No food, but they will sell you a wooden platter with diced cubes of their own home-made cheese, which is excellent.

Limited opening times that were being slowly relaxed - check the Website. Remote, but rewarding.

The brewery itself is located in an old coaching inn, and the stone watering troughs for horses still hug the walls of the inner courtyard. The site used to be a brewery in the past, but because it has not been continually run, it does not qualify for grandfathering out of modern brewery specifications. Some old family run breweries like Cantillon and Vapeur are able to continue functioning without upgrading all of their equipment. Mark at Kerkom has been in a battle to get clearance to run a brewery out of this building complex for many years. He has an unused stainless steel brew system and fermentation tanks sitting in his ancient brick building, just waiting for the go-ahead to get fired up. For now he has his beers brewed at another nearby brewery under contract.

This visit we met with Mark and his wonderful wife in the cozy tasting room. We started with a large stemware glass of Bink Blonde: and amazingly balanced hoppy Belgian pale ale. This is one of my all time favorite Belgian ales and I sincerely wish we could get it in Minnesota. We moved on with smaller glasses of all their other Bink beers: Bink Brown, the Spring seasonal Bink Blossom (made with honey and pear syrup), Kerkomse Tripel. All were fantastic! They also brew the dry and slightly herbal Adelardus Double, an Abbey style beer brewed with hops, candi sugar and gruit spice mixture. The Adelardus Tripel was the overall fan favorite from our group, also made with gruit. We also discovered a new Hop Verdomme (hops be damned!) a hoppy Belgian IPA, made as a better balanced response to American IPA's. We finished with a wonderfully strong and flavorful "Christmas" beer the Winterkoninkske Grand Cru. I have a bottle of this at home waiting for a special occasion!

For an early lunch ee were served gargantuan slices of soft dark bread, cheeses and pates all made with Kerkom beers. Simple fare but so fulfilling! Having learned our lessons last trip, we paced ourselves better this visit and did not leave the place reeling drunk! I love the hospitality, rustic feel and amazing beers at Kerkom.

Brouwerij Kerkom in Kerkom-Sint Truiden, Belgium
Brewery rating: 3.86 out of 5 with 1011 ratings