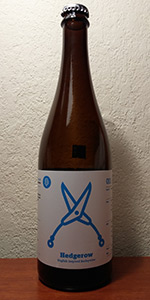 This beer pour a dark orange to brown color. A nice pleasant nose with hints of caramel and fruit with some smooth bread like aroma. the taste follows the nose to a point a sweet caramel taste with the hint of grapes in the back ground. The carbonation is smooth and it drinks a lot smoother than the 11% ABV listed on the bottle. I'll be interested to see how this ages.

Initial pours from the bottle deliver a slightly hazy deep-amber/copper colored body beneath a pillowy head of slightly yellowed off-white foam that steadily recedes. As such, the lacing is minimal with only tiny spots and streaks of lace left behind.

In the nose a delicate medium-dark caramel maltiness combines with a mild yeasty fruitiness (mainly apple, something else, perhaps berry). The malt is clearly notable, but not bold, and it doesn't appear to be an overly malty barleywine...

... and the flavor reflects that, although it's more malty than the aroma suggests. The fruitiness found in the nose is present, the malt is just as clear, and there are also some soft hops notes that are floral and mildly leafy and grassy (I'm guessing East Kent Goldings, although there may also be some Fuggles involved). The alcohol, if it is indeed 11% ABV, never shows, even in the dry, short-lingering finish although behind the scenes it probably helps to balance it as it doesn't seem to have that much bitterness to it. Malty, fruity, very subtly tart, and dry with an earthy and hoppy edge it could almost pass as just a strong English ale.

The mouthfeel is on the lighter side for the style, and remarkably soft and smooth due to a restrained, seemingly natural carbonation. It's reminiscent of cask ale, and as such reminds me very much of some of the 'lighter' English barleywines.

Without being powerful across the palate, it still packs a punch (it's definitely 11% ABV!), and that could be dangerous as it drink as easily as an "ESB". For those familiar with fresh English ales it's a must-try. Probably best enjoyed at cellar temperature as it opens up quite a bit as it warms.

Afternote: upon learning that this beer is brewed using red grapes from Vermont, that totally makes sense to me, and explains the missing fruitiness I could not put my finger on (even the subtle tartness). I tasted it again and I can see the grape, but I still wouldn't directly point it out in a review as I don't think it comes through clearly as such; but the grape addition also explains why it's a little lighter in body and malt character. Perhaps I should have read the label more carefully, or perhaps they should have labeled it as an "English Inspired Barleywine with Local Grapes" - that really makes a difference in how it's perceived (and scored). Still, quite nice, and as such I've actually upped my scores a bit as it really shouldn't be reviewed straight-forward as an English-style Barleywine.

L-Pours a clear amber with a 3/4 inch white fluffy head. Lacing is spotty and the head recedes to a half centimeter ring.
S- smell is strongly of toffee and alcohol.
T- Caramel and warming alcohol are the first thing to hit the palate. There is a subtle fruity component that is mostly obscured by the alcohol at the finish.
F- The beer coats the tongue and has low carbonation. This gives the brew a fuller mouthfeel.
O- This is a pretty good example of a english barleywine with the sweet malty finish and strong alcohol presence. I would have liked the grapes a little more forward in the taste profile. This is my favorite bottled brew by BBC.

Wet hay and wild flower honey aroma. Lemongrass tea and a slightly wild yeast flavor. Not what I was expecting from a barley wine style, but awesome. I love this beer.

This was poured into a tulip. The appearance was a light bronzed to burnt red almost brown color. A thin finger’s worth of white foamy head that dissipated within less than a minute. Lacing was messy and somewhat stringy. The smell started off with toast, sweet apples, figs, light vanilla, sweet sticky pear, light toffee, light cocoa. The taste was moderately sticky sweet with a subtle gracing of the bitterness invading and sliding into the aftertaste and finish. On the palate, this one sat about a light to medium on the body with a dare-I-say sessionable aspect to it. Uh...yeah for an English Barleywine, I’m not getting enough body on this one. Overall, well, the taste and the aroma is there, but the mouthfeel/palate/body needs more beef to it.

on tap at the farmhouse tap in burlington, and several years old now. this is a barleywine with vermont grown red wine grapes, and it has held up really well. a pretty almost ruby red color in the glass, with a low glow, impressive clarity, and a really pretty shade. it doesnt hold much head, and its not as obviously viscous and sticky as some barleywine can be, but still looks mature to me in the glass. i smell less english yeast and grain than i thought i would, the grapes really do a lot to this, i get some tannins, some port wine sweetness, and baked element, some brown sugar character, but not a ton of the malt itself. there is a light acidity to this when i taste it, likely from the grapes, and some trace oxidation which i always think flatters this particular style. i am impressed with the dryness, this isnt sugary at all in the finish, and i like the smoothness it has as well, boozy maybe sure, but not as outwardly colossal as these can often be, its not hard to drink. im not sure this would be so interesting without the fruit and the age, there isnt a ton going on with the base beer to me, but with the age and the fruit, i think its quite striking, distinctive, and even summery as barleywine goes. this was a pleasure to try, and another cool strong ale from these guys, who have impressed me most in these styles.