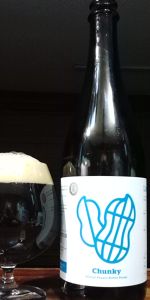 Notes: Peanut butter is often best served straight from the jar. You could drink straight from the bottle, but we recommend you pour this dark elixir into a glass to fully indulge in its decadence. Layers of roasted peanuts meet waves of chocolate and graham cracker flavor, eliciting fond memories of years past. Deep within the darkness of this ale lies subtle fruit reminiscent of peanut butter and jelly sandwiches.
View: More Beers | Place Reviews
Recent ratings and reviews. | Log in to view more ratings + sorting options.
Rated: 4.4 by malfunxion from New York

3.75/5  rDev -7.2%
look: 3.75 | smell: 3.75 | taste: 3.75 | feel: 3.75 | overall: 3.75
On tap at Blackback Pub. This was poured into a tulip. The appearance was a semi-dark brown close to black color with a one finger white foamy head that quickly dissipated. Lacing was light and semi-messy. The smell started off with some roasty peanuts, light vanilla, subtle graham cracker, sly chocolate. The taste was mostly sweet with that graham cracker flavor trying to give a lighter cracker-like balance. Chocolate comes back slightly. Subtle vanilla to chocolate aftertaste with a smooth dry finish. On the palate, this one sat about a light to medium on the body with a nice sessionability about it. Carbonation rides fairly light. Subdued bitterness. Overall, nice imperial porter for the most part, I could see myself coming back to this.
Jun 07, 2017
Rated: 4.29 by JeremiahFick from Michigan

Reviewed by Jesterr44 from Canada (ON)

Notes taken as I wander from arcade game to arcade game from my youth (actually there are a lot of games at The Archives that I've never seen): Well, I get peanut butter, Haa!!! of course, it'd better be there, right? It's also chocolatey, which seems to be the main force (it is a porter), with a bit of medium-dark caramel, and some mild coffee-like roastiness. Nutty, chocolatey, and caramelish but also... ahhh... hmmm... is there a subtle touch of spice to it, or is that just alcohol? Subtle background hops... grassy & leafy. I've had peanut butter beers that offered more peanut, but there's something about this that keeps you on the edge, looking for that note, although you can just let it go if you want, thinking of it as just a porter. I find it quite drinkable in that sense. Medium bodied... I might have been expecting more, but it's decent enough. Gently toasty in the finish. Nutty. It lingers. It's not a hit you over the head beer, but it's pretty straightforward and solid in what it is. But is that good enough? Shouldn't it have more complexity? Nahhh, it's a peanut-porter, and it's done all that it's set out to do. IF THIS WAS LESS EXPENSIVE I'd consider drinking it more often, but I'm still not sure I'd make it a year-round beer. It's good as a special treat, VERY GOOD, but it still doesn't transcend into greatness. Oh, wait, I even forgot that it's strong - that makes a difference! Maybe it would be good for that after Thanksgiving dinner drink, or would it be too much? I'd at least definitely make it part of my Christmas all-day-dinner celebration. Or, it could be used as a dessert beer. Ahhh, I almost feel bad saying that, but it is a kind of specialty beer so I guess it's kind of asking for it. Overall: well worth trying but don't get your hopes up.

Reviewed by Stevem68 from Ohio

Reviewed by angrybabboon from Massachusetts

A: Dark, deep brown, but not black - pours with a medium sized, beige head, fades to a few wisps, retains a medium collar, leaves some streaks of lacing

S: Lightly toasted, cooked malts, and straight-up toast - biscuits - not a ton of peanut butter, but some definite roasted peanut nuttiness - some chocolate malts - not particularly sweet, but some hints of booze

T: Biscuits with touches of peanut - interesting malt profile, with some bread, toast, biscuits, toasted grains, and caramel - some chocolate - the peanut butter component is interesting, more of a roasty peanut dust flavor than creamy peanut butter - on the boozy side, but the peanut flavor actually kind of rounds it out, which works oddly well

M: On the heavy side of medium, lightly oily, mostly dry

O: Where are my chunks?

This is interesting. The peanut butter aspect is not as big as I was hoping, but there's still something there. I don't quite get why this is 12%ABV, but it works fairly well.

Reviewed by dar482 from New York

The flavor follows with medium peanut butter, a medium sweetness, a light roasty to toasty malt quality, onto some alcohol on the backend. The mouthfeel is medium, albeit thin for the 12%.

Pours a deep, dark brown hue with a thin head into my glass.

Roasty with a strong coffee note. I honestly can't smell any peanut butter but perhaps it's in the mouthfeel?

Question answered. Slick, peanut bite in the middle. Reminds me of biting into a peanut butter cup. Just a little bit. Nothing too strong.

It's quaffable at 12% but don't go overboard. Warms the throat. If you age a bottle for a few months, that bite may disappear. I'm considering buying another bottle. Oh, and I can taste peanut residue at the back of the tongue so it's definitely there.

A rich, deep porter with touch of peanut butter in the middle. It's good enough for me but may not satisfy those seeking a stronger peanut butter flavor.

Reviewed by jason3125 from Vermont

Reviewed by smanson56 from New Hampshire