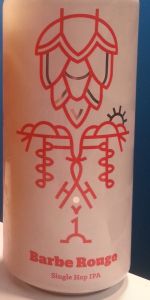 Notes: Single Hop IPA... sounds good! Barbe Rouge, or red beard from France, I've never heard of it. Of course the French haven't exactly been known for their hops either (for reference, Albania produces more hops than France annually). "abv. 5.9%"... ? More of a hoppy pale ale then isn't it? Cloudy golden orange beneath a short head of bright white. Looks like a glass of orange juice. The head retention could be better, but the lacing is decent. Aroma is hoppy (no other way to describe it) with an edge of cut vegetation... kind of raspy. Is it chlorophyll? It reminds me of fresh hops just picked. Very little malt to be found beneath the hops. Moving on, it's fruity as well, not particularly descript, maybe like berries or cherries. Ahhh, and that carries over into the flavor! Very nice. It's not bold but there is a distinct soft cherry note. I can't tell if it's from the yeast or the hops though. The leafy and grassy hops remain, and it's floral as well, which I didn't find in the nose. The malt is fairly basic, biscuity, and nicely balanced by a stiff bitterness. Again, it doesn't seem that bitter so I'm confused as to why it's labeled an IPA. Light-medium in body with a fine-bubbled, seemingly natural just below standard level carbonation. Nice finish with a dollop of sweetish berry-like fruitiness. Balanced. Charming.

Pours a cloudy whitish-gold hue with a frothy head into my glass. Very appealing as it is. I'm thirsty already.

Essence of strawberry in the nose that occurs naturally due to hop strain. It blends well with a light buttered bread malt base.

Berries and cream with some light, crisp bread in the background. Think of strawberry shortcake.

Finishes clean and sweet. Not what I was expecting in a good way.

Try this amazing IPA while you still can!

hazy golden color, fairly thick white head. good lacing. fruity hop aroma. the brewery description says this hop has strawberry flavors, and I can see that. smell is sweet from the hops, but taste is more balanced. not bitter at all from the hops. just mild malt flavor. thin to medium bodied.

S: Definitely do get a strawberry/melon-like nose from the hopping. Fair amount of malt and funk on the back end. This definitely is a bit past optimal drinking status.

T: A little bit of strawberry and watermelon up front, then light malts and earthy funkiness. It's not very forward, and I would imagine any strawberry beer by nature has to be fairly delicate.

O: It drinks fairly well, just not my favorite way to do an IPA, but for summer especially it's OK.

Poured 16oz can into snifter. Canned 4/5/16. A golden peach color that is very cloudy with a big 3 finger foamy white head. Crazy retention that fades into a thick cap and leaves thick lacing on the glass. The aroma is very floral bursting with sweet nectar and berry notes. There are hints of leafy hops and sweet honey. Flavor is transcendent with a strong bitter berry flavor. It does have a reminiscent strawberry like taste, but very flowery. It is kind of green and leafy, a bit herbal and leaves an odd aftertaste without very much sweetness. Feel is lighter and very well carbonated. This was a good showcase of these unique hops. It worked well for a single hop, but could really make a difference when mixed. I would love to see this hop used in a Saison.

The nose is subtle and has a faint strawberry/blackberry vibe which is pleasant and unlike any other hop variety that I've tried so far .

Taste is exactly what you would expect from the aroma: not an explosion of flavor, quite subtle overall yet pleasant and appealing (don't expect a strawberry Fanta pop flavor).

Slightly thin and a sort of creamy mouthfeel, I prefer a drier finish from this style.

Anticipation was high for this new hop, and I think this IPA was nicely done. I would have enjoyed it more if it had been more aggressively dry hopped and finished a touch drier, but this is a very intriguing single hop IPA with a lot of good character and well worth trying.