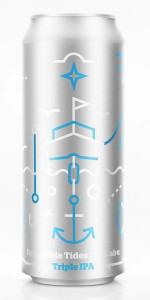 Rated by Rimbimhoot from Illinois

Sad that it deteriorated so drastically in just 6 weeks. was really looking forward to this one.

Pours a slightly hazy, muted golden color. Has a fine, thin, white head, most of which gathers at the rim. Lacing is fairly light, overall. Aroma is mildly sweet and fruity, with some tangerine and apricot. Feel is rather smooth, with a body in the medium range, but no more.

Flavor has some mild crackery, biscuity malt action as a foundation. Then there's fruity, hoppy shenanigans coming into play. Lastly, some light grapefruit, a bit o' sweeter apricot, and pithy, rindy notes. Rather so-so and underwhelming, all in all (especially for the price). Prosit!

Smells of slightly dank grassy and floral hops with citrus and sweet fruit.

This brew is a very drinkable, powerful, well balanced, sipper.

I still recommend trying anything BBC puts out.

Rated by edthehead from New York

Pours a dark orange with three fingers of off-white foam. Aroma is resiny, herbaly, medicinal, tropical fruit, and piney hops. It leans well into the sticky nether of hop notes - a spider web of evergreen notes. Flavor profile is medicinal, resiny, herbaly, grassy, piney, and tropical fruit hops. While the sticky, evergreen notes lead it, the tropical fruits create an equal balance on the back end. Forward is sticky and bitter, but the backend carries some soothing sweetness. Mouth feel is medium-thick with a hearty silty texture. Overall, an absolute hop bomb that carries both sticky, resiny hops and sugary, citrus hops.

Reviewed by clausthaler from Massachusetts

4.29/5  rDev -1.8%
look: 4.25 | smell: 4 | taste: 4.5 | feel: 4.25 | overall: 4.25
7.30.21 canned. Nice 2” head dissipates into a 1” head. Smells like dank tropical fruits, mango durian gasoline notes but not Strong, kind of standard ipa smell for today but nice tight and not very yeasty. Melon grass hop odor. Nice body but definitely shows perhaps a little age in terms of maltiness on the finish This has been refrigerated it’s whole life afaik. Really nice lasting cantaloupe melon dank flavor throughout, with some tangents but a really solid backbone. Melon vibes linger for a while, corny but it’s lip smacking like run your tongue around your mouth after finishing a sip and it’s dank musky melon all over again. At this point honestly gotta bump my rating up slightly, it’s quite nice solid 4.2, not my favorite would grab a single over a 4pk but happy either way.

Doesn’t hit like 10% at all. This is better than trilliums Insert hip hop reference anywhere. That is a hop soup you experience, this a delight

Reviewed by scotorum from Massachusetts

Poured from the 16 oz. can into a Samuel Smith English tulip.

a: Opaque orange gold with a finger thick white head which receded to thick surface foam and dense lacing.

s: Citrus leaning to orange rind, from a foot away.

Rated by VTBeerDrinker from Vermont

L -- Pale and intensely turbid orange body with two fingers of solid white head produced with moderate pour. Good retention and great lacing
S -- Orange creamsicle, clementine, vanilla, lemon sorbet, dank weedy resins, guava, pineapple candy, kiwi
T -- Largely follows the nose. Straightforward creamy citrus -- the citra and mosaic take the center stage here for sure. Bit of astringent black tea bitterness in the back but nothing much. The pale malt bill works well here; it's not as syrupy sweet as many triple IPAs are
F -- Soft and fluffy. Medium+ mouthfeel, medium carb. Very drinkable, especially for the ABV
O -- One of the best, if not the best, TIPA I've had to date. Bravo, BBC

Reviewed by PSanger from Connecticut

Reviewed by CommonSense from Maine

probably the best BBCO beer I've had to date

Reviewed by agreenman19 from Connecticut

Reviewed by dns711 from Vermont

4.76/5  rDev +8.9%
look: 5 | smell: 4 | taste: 5 | feel: 5 | overall: 5
When friends visit from out of state, this is the beer I tell them they simply must have (not Heady, not a Hill Farmstead variety, not a Lawson's variety...). Extraordinarily well-balanced with an unexpected malt balance that makes this remarkably drinkable despite the 10% ABV. Agree with the description of tropical fruits on the nose and wheat + honey upon tasting. Ultimately this takes the best of other BBCO offerings (Wizard, Beekeeper) and fuses them together perfectly. If left with only one IPA to drink the rest of my life (and not required to function on a daily basis), this would be the one.
Jan 16, 2019
Rated: 4.52 by Uconnbrewskies from Connecticut