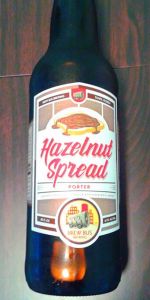 Notes: Spread on the love with this decadent Imperial Milk Porter. Like a famous brand of sweetened hazelnut paste our lawyers advised us not to mention by name, this beer is just as great for dessert as it is for breakfast.
View: More Beers | Place Reviews
Recent ratings and reviews. | Log in to view more ratings + sorting options.
4.25 by paulish from New York on Apr 03, 2021

Poured a brown body with large tan head and minimal lace patches. Chocolate aroma and a large chocolate taste with hint of hazelnut but mainly an almost cloying chocolate sweetness.

Thin head. Body is a very attractive dark brown, not unlike a thinner version of Nutella itself.

A touch fizzy for a near-double digit ABV brew. Still, it's not exactly thin or watery; overall, I'd call it "medium" bodied.

Pours a dark brown color with tan colored head. Chocolate, nuts, and some roast on the nose; follows onto the palate. Tastes like Nutella. Medium bodied. Finishes with more Nutella flavors.

NOTE: My original review is the first one. Scores are in parentheses. The total for the original review was 2.77/5.
However, the second batch I had was much improved, so I have decided to update the scores entered into BA.

A: Translucent but a fairly dark brown, with a thin tan head that fades quickly and low visible carbonation. (3.5/5)

S: Low aroma overall. Roasted brown malts, a mild nuttiness, and a touch of hop bitterness. I'm picking up a hint of acetic tartness in the background, which shouldn't be here. (2.75/5)

T: Roasted malts and a bit of chocolate. Also, a mild tart cherry flavor with acetic acid tartness that fades into some tannic dryness. No nuts (hazel or otherwise) at all. NOTE – as it warms, there is a slight hazelnut sweetness that pokes its head up around the tartness near the swallow. (2.5/5)

O: I hesitate to throw the “Infected” word around, but this may have been starting down that road. The bottle has been refrigerated since I bought it at the bottle shop, who also had it refrigerated. There’s minimal hazelnut flavor here, and a definite tart acetic flavor that doesn’t belong. Honestly, the beer was actually still pretty tasty; if this was sold as a sour porter, it would be pretty good. I finished my pour without a problem. But it isn’t what it was supposed to be…at least this bottle. Hopefully they’ll get things straightened out at the new production facility.
Scores given are for what the bottle was claimed to be. If just handed a blind pour, I would estimate a score of 3.5/5. (2.75/5)

UPDATE: I'm sitting here drinking a recent canned release (5/2/19). Poured from the 12 oz. can into an Invasion of the Funk tulip glass.

S: Aroma much nicer. Chocolate, toasted malts, hazelnut. Some coffee, vanilla, and sweet lactose. Sweet but not completely unbalanced; enough hazelnut to be present without overwhelming other aspects (4/5).

T: Milk chocolate and dark chocolate, cacao nibs. Sweet vanilla, lactose, modest hazelnut. Still getting some coffee notes in the malt roast. More chocolate and hazelnut with lingering sweetness at and after the swallow (4/5).

M: Low alcohol presence. Carbonation sensation a bit on the low side. A silky mouthfeel but on the lighter side for body within the style (3.5/5).

O: Certainly a big improvement over the first time I had this, and I'm glad I decided to pick one up from another release. It's still not my favorite beer, but I wouldn't turn another pour down. The price point at the local Total Wine was a bit ridiculous, but this was worth another drink (3.75/5).

Pretty good, not too swee.

Highly disappointed. The porter tasted watered down with nary a hint of hazelnut. Probably one of the worst porters I've ever had. This is becoming a theme with Brew Bus and it's unfortunate CCB slaps their name on their. Avoid this weak offering.